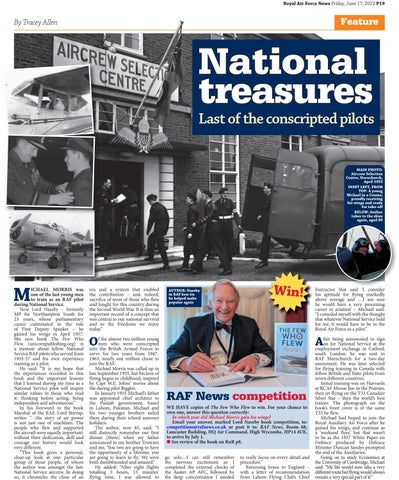 Last of the conscripted pilots

MAIN PHOTO: Aircrew Selection Centre, Hornchurch, April 1953 INSET LEFT, FROM TOP: A young Michael in a Cessna; proudly receiving his wings and ready for take-off BELOW: Author takes to the skies again, aged 80

ICHAEL MORRIS was one of the last young men to train as an RAF pilot during National Service. Now Lord Naseby – formerly MP for Northampton South for 23 years, whose parliamentary career culminated in the role of First Deputy Speaker – he gained his wings in April 1957. His new book The Few Who Flew (unicornpublishing.org) is a memoir about fellow National Service RAF pilots who served from 1955-57 and his own experience training as a pilot. He said: “It is my hope that the experiences recorded in this book and the important lessons that I learned during my time as a National Service pilot will inspire similar values in those who read it: thinking before acting, being independent and adventurous.” In his foreword to the book Marshal of the RAF, Lord Stirrup, writes: “…the story of air power is not just one of machines. The people who flew and supported the aircraft were equally important: without their dedication, skill and courage our history would look very different. “This book gives a personal, close-up look at one particular group of those people, of whom the author was amongst the last: National Service aircrew. In doing so, it chronicles the close of an

era and a system that enabled the contribution – and, indeed, sacrifice of most of those who flew and fought for this country during the Second World War. It is thus an important record of a concept that was central to our national survival and to the freedoms we enjoy today.”

f the almost two million young men who were conscripted into the British Armed Forces to serve for two years from 19471963, nearly one million chose to join the RAF. Michael Morris was called up in late September 1955, but his love of flying began in childhood, inspired by Capt W.E. Johns’ stories about the daring pilot Biggles. In January 1955 Michael’s father was appointed chief architect to the Punjab government, based in Lahore, Pakistan. Michael and his two younger brothers sailed there during their school summer holidays. The author, now 85, said: “I still distinctly remember our first dinner [there] when my father announced to my brother Tristram and me, ‘You two are going to have the opportunity of a lifetime; you are going to learn to fly.’ We were both dumbfounded and amazed.” He added: “After eight flights totalling 5 hours, 15 minutes’ flying time, I was allowed to

Instructor that said ‘I consider his aptitude for flying markedly above average and …I am sure he would have a very promising career in aviation’ – Michael said: “I consoled myself with the thought that whatever National Service held for me, it would have to be in the Royal Air Force as a pilot.”

RAF News competition WE HAVE copies of The Few Who Flew to win. For your chance to own one, answer this question correctly: In which year did Michael Morris gain his wings? Email your answer, marked Lord Naseby book competition, to: competitions@rafnews.co.uk or post it to: RAF News, Room 68, Lancaster Building, HQ Air Command, High Wycombe, HP14 4UE, to arrive by July 1. l See review of the book on RnR p8. go solo…I can still remember the nervous excitement as I completed the external checks of the Auster AP AFC, followed by the deep concentration I needed

to really focus on every detail and procedure.” Returning home to England – with a letter of recommendation from Lahore Flying Club’s Chief

fter being summoned to sign on for National Service at the employment exchange in Catford, south London, he was sent to RAF Hornchurch for a two-day assessment. He was later selected for flying training in Canada with fellow British and Nato pilots from seven different countries. Initial training was on Harvards at RCAF Moose Jaw in the Prairies, then jet flying on the T33 Canadair Silver Star – then the world’s best trainer. The photograph on the book’s front cover is of the same T33 he flew. Michael had hoped to join the Royal Auxiliary Air Force after he gained his wings, and continue as a ‘weekend flyer,’ but that wasn’t to be as the 1957 White Paper on Defence produced by Defence Minister Duncan Sandys prompted the end of the Auxiliaries. Going on to study Economics at the University of Cambridge, Michael said: “My life would now take a very different route but flying would always remain a very special part of it.”