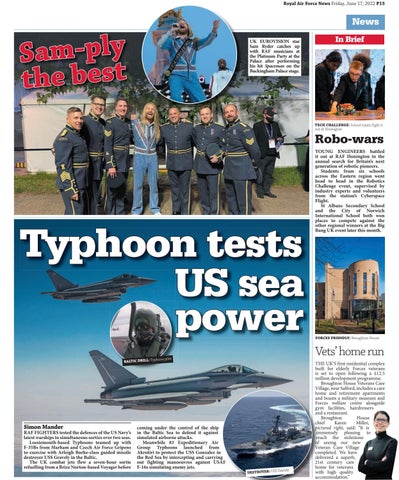 UK EUROVISION star Sam Ryder catches up with RAF musicians at the Platinum Party at the Palace after performing his hit Spaceman on the Buckingham Palace stage.

TECH CHALLENGE: School teams fight it out at Honington

Typhoon tests US sea power RAF FIGHTERS tested the defences of the US Navy’s latest warships in simultaneous sorties over two seas. Lossiemouth-based Typhoons teamed up with F-35Bs from Marham and Czech Air Force Gripens to exercise with Arleigh Burke-class guided missile destroyer USS Gravely in the Baltic. The UK combat jets flew a seven-hour sortie refuelling from a Brize Norton-based Voyager before

coming under the control of the ship in the Baltic Sea to defend it against simulated airborne attacks. Meanwhile 83 Expeditionary Air Group Typhoons launched from Akrotiri to protect the USS Gonzalez in the Red Sea by intercepting and carrying out fighting manoeuvres against USAF F-16s simulating enemy jets.

YOUNG ENGINEERS battled it out at RAF Honington in the annual search for Britain’s next generation of robotic pioneers. Students from six schools across the Eastern region went head to head in the Robotics Challenge event, supervised by industry experts and volunteers from the station’s Cyberspace Flight. St Albans Secondary School and the City of Norwich International School both won places to compete against the other regional winners at the Big Bang UK event later this month.