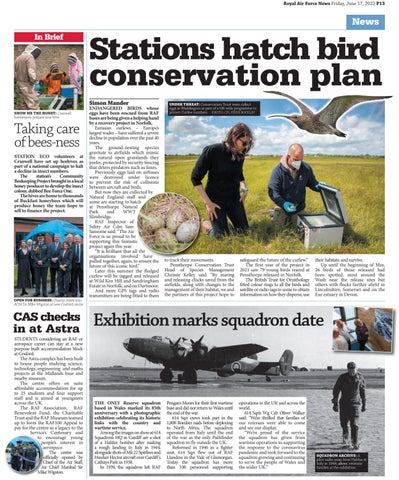 Taking care of bees-ness STATION ECO volunteers at Cranwell have set up beehives as part of a national campaign to halt a decline in insect numbers. The station’s Community Beekeeping Project brought in a local honey producer to develop the insect colony, dubbed Bee-Force One. The hives are home to thousands of Buckfast honeybees which will produce honey the team hope to sell to finance the project.

CAS checks in at Astra STUDENTS considering an RAF or aerospace career can stay at a new purpose built accommodation block at Cosford. The Astra complex has been built to house people studying science, technology, engineering and maths projects at the Midlands base and nearby museum. The centre offers en suite affordable accommodation for up to 25 students and four support staff and is aimed at youngsters across the UK. The RAF Association, RAF Benevolent Fund, the Charitable Trust and the RAF Museum teamed up to form the RAF100 Appeal to pay for the centre as a legacy to the Service’s Centenary and to encourage young people’s interest in aerospace. The centre was officially opened by Chief of the Air Staff, Air Chief Marshal Sir Mike Wigston.

ENDANGERED BIRDS whose eggs have been rescued from RAF bases are being given a helping hand by a recovery project in Norfolk. Eurasian curlews – Europe’s largest wader – have suffered a severe decline in population over the past 40 years. The ground-nesting species gravitate to airfields which mimic the natural open grasslands they prefer, protected by security fencing that deters predators such as foxes. Previously eggs laid on airbases were destroyed under licence to prevent the risk of collisions between aircraft and birds. But now they are collected by Natural England staff and some are starting to hatch at Pensthorpe Natural Park and WWT Slimbridge. RAF Inspector of Safety Air Cdre Sam Sansome said: “The Air Force is so proud to be supporting this fantastic project again this year. “It is brilliant that all the organisations involved have pulled together, again, to ensure the future of this iconic bird.” Later this summer the fledged curlew will be tagged and released at Wild Ken Hill and Sandringham Estate in Norfolk, and on Dartmoor. And more GPS tags and radio transmitters are being fitted to them

to track their movements. Pensthorpe Conservation Trust Head of Species Management Chrissie Kelley said: “By rearing and releasing chicks saved from the airfields, along with changes to the management of their habitat, we and the partners of this project hope to

safeguard the future of the curlew.” The first year of the project in 2021 saw 79 young birds reared at Pensthorpe released in Norfolk. The British Trust for Ornithology fitted colour rings to all the birds and satellite or radio tags to some to obtain information on how they disperse, use

their habitats, and survive. Up until the beginning of May, 26 birds of those released had been spotted, most around the Wash near the release sites but others with flocks further afield in Lincolnshire, Somerset and on the Exe estuary in Devon.

THE ONLY Reserve squadron based in Wales marked its 85th anniversary with a photographic exhibition celebrating its historic links with the country and wartime service. Among the images on show at 614 Squadron’s HQ in Cardiff are a shot of a Halifax bomber after making a rough landing in Italy in 1944, alongside shots of Mk 22 Spitfires and Hawker Hector aircraft over Cardiff’s Cathays Park in 1938. In 1939, the squadron left RAF

Pengam Moors for their first wartime base and did not return to Wales until the end of the war. 614 Sqn crews took part in the 1,000 Bomber raids before deploying to North Africa. The squadron operated from Italy until the end of the war as the only Pathfinder squadron to fly outside the UK. Reformed in 1946 as a fighter unit, 614 Sqn flew out of RAF Llandow in the Vale of Glamorgan. Today the squadron has more than 100 personnel supporting

operations in the UK and across the world. 614 Sqn’s Wg Cdr Oliver Walker said: “We’re thrilled that families of our veterans were able to come and see our display. “We’re proud of the service the squadron has given from wartime operations to supporting the response to the coronavirus pandemic and look forward to the squadron growing and continuing to serve the people of Wales and the wider UK.”

SQUADRON ARCHIVE: A pilot walks away from Halifax in Italy in 1944; above, veterans’ families at the exhibition