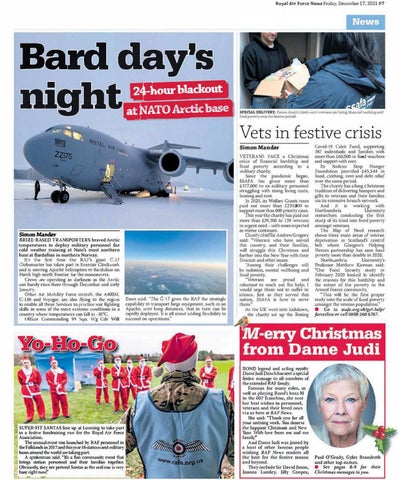 BRIZE·BASED TRANSPORTERS braved Arctic temperatures lo deploy military , personnel for cold weather training at Nato s most northern base al Bardufoss in northern Norway. It&#39;• IJ1e first iime the R,\F&#39;s giant C-17 Globemasler has taken part in Exercise Clockwork and is moving Apache helicopters IQ Bardufoss on Nahis high north frontier for the manoeuvres. Crews are operating in darkness as the Arctic sun barely ris.:s there th rough December and early Janmu·y. Other Air Mobility force aircraft, the A400M. C-130 and Voyager, are also Aying 10 the region lo enable all three Services to prnclise war fighting skills in some of the most- exlreme conditions in a country where temperatures can fall to -30°C. Offlcer Comm.anding 99 Sqn. Wg Cdr Will

Essex said: &quot;The C-17 gives the RAF the strategic capability I&lt;) transport large equipment, such as an Apache. over lung distances, that in turn can be rapidly deployed. h is all about adding nexibility 10 succeed on operations.&quot;

SUPER-FIT SANTAS line up al Leeming to take part in a festh-e fundraising run for the Royal Air Force Assoeintion. The annual event was law&gt;&lt;:hed by RAF personnel in d&gt;&lt;Falklands in 2017 and this year J8statio,.is and 1.uilitary bases around the wodd are taking part A spokesman said: &quot;It&#39;s a fun commw1ity e&gt;·ent d1a1 brin&amp;- station personnel and their famili� together. •. Ob,fously, d,ey are pretend Santas as the real one is very -&#39;•-:;..• ! bu.,-y right no,✓.&#39; L a

VETERANS FACE a Christmas crisis of financial hardship and food poverty according to a rnmtary charity. Since the pandemic began, $SAFA has given more than £377,000 to ex-military personnel struggling with rising living costs, heating and rent. In 2020, its Welfare Grants team paid out more than £230,000 to support more tl1an 600 priority cases. This year the charity has paid out more than £.39.300 lo 138 veterans in urgent need - with more expected as wint�r continues. CharitycbiefSir Andrew Gregory said: &quot;\letcr3llS who have served th.is country, and their families, will slmggle this Christmas and further into the New Year with their fmances and other issues. &quot;Among their challenges wiU be isolation, mental woUbeing a.od food poverty. ..Veterans arc proud and reluctant 10 reach out for help; I would urge them not 10 suffer in silence. Just as they served this nation, SSA FA is here to serve them.&quot; As the UK went into lockdown, the charity set up the Boeing

BOND legend and acting royalty Dame Judi Dench bas scot a special festive message lo all members of the extended RAF family. Famous for many roles, as well as playing Bond&#39;s boss M in the 007 franchise, she sent her best wish.es to personnel, veterans and their loved ones via us here at RAF News. She s.1id: &quot;Thank you for all your untiring work. You deserve the happiest Christmas and New Year. With love from me and me , famil, )· AJ1d Dame Judi was joined by a host of other l&#39;a.oious people wishing RAF News readers all the best for the festive season and beyond. They include Sir David Jason, Joanna Lumley, )illy Cooper,

Covid-19 Crisis Fw1d, supporting 387 individuals and families with more than E60,SOO in food vouchers and support with rent. Its Sodexo Stop Hunger Foundation provided £45,544 in food, dothing, rent and debt relief over the same period. The charity has a long Christmas tradition of delivering hampers and gifts 10 veterans and their families via its extensive branch network. And it is working with Northumbria University researchers conducting the first study of its kind into food poverty amongst veterans. The Map of Need research shows three main areas or veteran deprivation in Scotlands central belt where Glasgow&#39;s Helping Heroes partnership has seen fooil paverty more lhan double in 2020. University&#39;s Northumbria Professor Manhew Kiernan said: &quot;Our Food Security study in February 2020 looked lo identify the reasons for this hardship and the extent of the poverty in the Armed Forces com,mmity. &quot;This will be the first proper study into the scale c,f food poverty amongst the veteran population.&quot; • Go to ssnfa.org.uklget-/,elp/