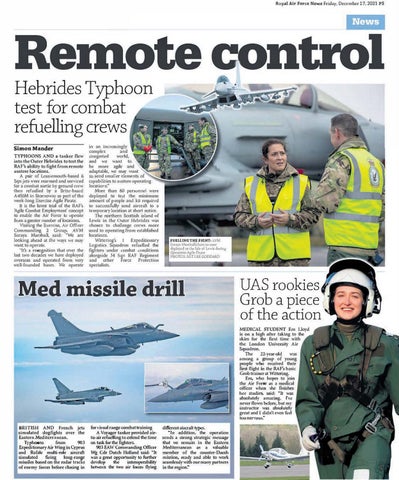 Hebrides Typhoon test for combat refuelling crews in an increasingly complex and world, TYPHOONS AND a tanker flew -congested into the Outer Hebrides to test the and we want to RAF&#39;s ability to fight from remote be more agile and adaptable, we may want �ustere locations. A pair of Lossiemouth-based 6 to send smaller elements of �n jet$ \\1ere rearmed and serviced capabi�ties to austere operating for a combat sortie by grollnd cm• locations:then refuelled by a Brlze-ba.sed More than 6() personnel were A400M in Stornoway as part of the deployed to te,t the minimum amount ofp eople and kit required week-long £.xercise Agile Pirate. It is the latest trial of the RAFs lo successfully send aircraft to a &#39;.Agile Combat Employment&#39; concept temporary location at short notice. IO enable lhe Air Force 10 opernle The northern Scottish island of l.ewis in the Outer Hebrides was from a greater number of localions. Visiting the Exercise, Air Officer chosen to challenge crews more Commanding 2 Group, AVM used to operating from established Sllraya Mar.�hall, said: •we are locations. Wittcrin�� I EXj?editionMy looking ahead al the ways we may Logistics Squadron refuelled the want to operate. &quot;Jt&#39;s a recognition that over the figf1ters under combat conditions last Lwo decades we have deployed alongside 34 Sqn RAF Regiment overseas and operated from very and other Force Protection wcll-fow1ded bases. We operate specialists.

UAS rookies Grob a piece 1 of the action A

MEDICL STUDENT Em Lloyd is on a high after taking to the skies for the 6rst time with the London University Air Squadron. The 22-year-old was among a group of young people who received their 6rst flight in the RAFs basic Grob lrainer at Wittering. Em, who hopes to join the Air Force as a medical officer when she finishes her studies, said: &quot;It was absolutely amazing. l&#39;w never flown before, but my instructor was ab$0lutely great and I djdn&#39;t even feel

BRfflSH AND French jets simulated dogfights over the Eastern Mediterranean. &#39;Iyphoons from 903 Expeditionary Air Wing illCyprus and Rafale mu.lti-role aircraft simulated firing lo11g-ra11ge missiles based on the r.1dar tracks of enemy forces before closing in

different aircraft types. &quot;In addition, the operation sends a strong strategic message that we remain in the Eastern MedHerranean as a ,.,.luable member of the counter-Daesh mission, ready and able to work seamlessly with our many parbters in the region.&quot;