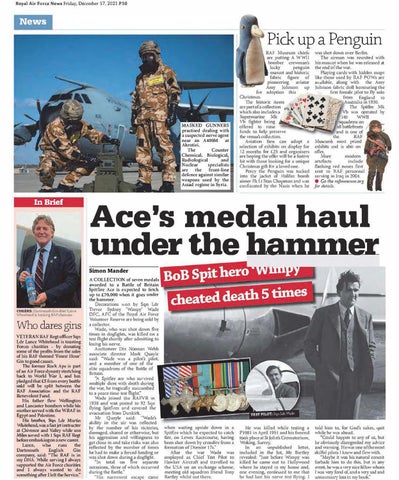 Pick up a Penguin

RAF Museum chiefs was shot down over Berlin. are pulling A WWll The airman was reunited with bomber crewman&#39;s his mascot when he was released at lucl-ypenguin the end of the war. mascot and hisloric Playing cards wilh hidden maps fabric figure of like those used by RAF POWs arc pioneering avialor anilable, along with the Amy Amy Johnson up /ohnson fabric doll honouring the flrsl female pilot to Oy solo for adoption this Christmas. from England 10 , The historic items &quot;1&quot;&#39; ,.;. -:- Auflralia in 1930. .., arcpart ofncoUection � •� • &quot;1&quot;&#39; 11\e Spitfire Mk V b w;1s operated l&gt;y which also includes a , Supcrmarine Mk a .; 140 WWII .r. .r. • Vb fighter being ..,. ..,.,, squadrons on offered lo raise &#39;!!!!!!...;�;;:,,• .· � all ba1tlefronts funds 10 help preserve and is one of the RAF the venue&#39;s collection. Aviation fans can adop1 a Museums most prized selection of exhibits on display for exhibits and is also on 12 months for £25 and orga11isers offer. are hoping the offer will be a festive More modern hit with those looking for a unique artefacts include Cliristmas gift for a loved one. flashing red noses first Percy the Penguin was tucked sent lo RA_F personnel into the jacket of Halifax bomb serving in Iraq in 2004. aimer FIL l.t Stan Chapman and was • Go tlie mfmusewn.org confiscated by the Nazis when he for details.

MASKED GUNNERS practised dealing with a suspected nerve agent near an A400M at Akrotiri. Counler. The Chemical, Biological, Radiological and Nuclear specialists are the front-line defence against similar weapons used by the Assad regime in Syria.

Who dares gins VETERAN RAF Regt officer Sqn Ldr Lance Whitehead is toasting Forces charities - by donating some of the pro6ts from the sales of his RAF themed &#39;Finest Hour&#39; Gin to good causes. 111e former Rock Ape is port of an Air Force dynasty stretching back to World War I, and has pledged that £S from every bottle sold will be split between the RAF Association and the RAF Benevolent Fund. His father Oew Wellington and Lancaster bombers while his motlwr sen•ed with the WRAF in Egypt and Palestine. His brolhcr, Sqn Ldr Martin Whitehead, was a fast jet instructor at 01ivenor and VaUey while son Miles served with I Sqn RAF R,gt before embarking on a new career. Lance, who runs the Gin Dartmouth English company, said: &quot;The RAF is in my DNA. While servu,g I always supported the Air Force charities and I always wanted to do sometJ1ing after I left the Service?&#39;

A COLLECTTON of seven medals awarded to a Battle of Britain Spitfire Ace is expected lo fetch up to £70,000 when it goes u11der the hammer. Decora1ions woo by Sqn Ld.r Trevor Sydney &#39;Wimpi? Wade DFC, AFC of the Royal Air Force Volunteer Reserve are being sold by a collector. Wade, who was shot down five times in dogfights, was killed on a test flight shortly after admitting lo losing his nerve. Auctioneer Dix Noonan Webb associate director Mark Quayle said: &quot;Wade was a pilots pilot. and a member of one of the elite squadrons of the Battle of Britain. &quot;A Spitfire ace who survived multiple dices with death during the war, he tragically succumbed to a peace-time test flight.&quot; Wade Joined the RAFYR in 1938 and was posted 10 92 Sqo flying Spitfires and covered the evacuation from Dunkirk. Mr Quayle said: &quot;Wade&#39;s al)ility in the air was reOected by the number of his victories, damaged, shared or otherwise, but his aggression and willingness to get close in and take risks was also reflected by the number of times he had lo 111ake a forced-landing or was shot down during a dogfight &quot;l.n total on five separate occasions, three of which occurred during the Battle:&#39; &quot;His na.rrowest escape came

when waiting upside down in a Spitfire which he expected 10 catch fire, on Lewes Racecourse, having been shot down by crossfi.re from a formation of Dornier l7s:· After the war Wade was employed as Chief Test Pilot to Hawker Aircraft a,nd travelled to the USA on an exchange scheme, meeting old squadron friend 1lmy Bartley whilst out there.

He was killed while testing a 1&#39;1081 in April 1951 and his funeral took place at St John&#39;s Crematorium, Woking, Surrey. ln an unpublished lett.er, included in the lot, Mr Bartley revealed: &quot;Just before Wimpy was kilied he came out to Hollywood 1vhere he st&quot;ayed in my home and, one evening, confessed to me that he had lost his nerve test flying. 1

told him to, for God&#39;s sakes, quit while he was ahead. &quot;Could happen to any of us, but he obviously disregarded my advice and warning. Hewa.one ofthe most skilful pilols I knew and flew with. «Maybe it was his naturaJ conceit forbade him to do this, but in any event. he wai.a very nice fellm\1 whom I was very fond of, and a very sad and 11onecessary loss i,1 111)&#39; book.&quot;