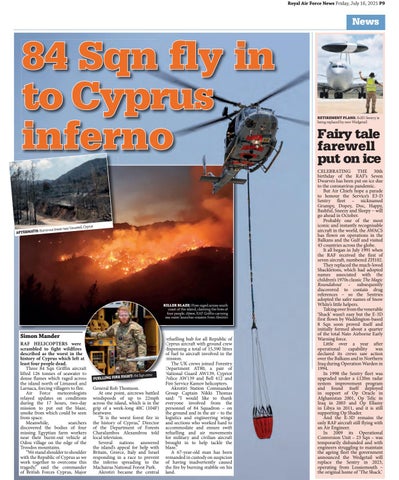 Simon Mander RAF HELICOPTERS were scrambled to fight wildfires described as the worst in the history of Cyprus which left at least four people dead. Three 84 Sqn Griffin aircraft lifted 126 tonnes of seawater to douse flames which raged across the island north of Limassol and Larnaca, forcing villagers to flee. Air Force meteorologists relayed updates on conditions during the 17 hours, two-day mission to put out the blaze, smoke from which could be seen from space. Meanwhile, searchers discovered the bodies of four missing Egyptian farm workers near their burnt-out vehicle at Odou village on the edge of the Troodos mountains. “We stand shoulder to shoulder with the Republic of Cyprus as we work together to overcome this tragedy,” said the commander of British Forces Cyprus, Major

General Rob Thomson. At one point, aircrews battled windspeeds of up to 22mph across the island, which is in the grip of a week-long 40C (104F) heatwave. “It is the worst forest fire in the history of Cyprus,” Director of the Department of Forests Charalambos Alexandrou told local television. Several nations answered the island’s appeal for help with Britain, Greece, Italy and Israel responding in a race to prevent the inferno spreading to the Machairas National Forest Park. Akrotiri became the central

refuelling hub for all Republic of Cyprus aircraft with ground crew dispensing a total of 15,590 litres of fuel to aircraft involved in the mission. The UK crews joined Forestry Department AT80, a pair of National Guard AW139, Cypriot Police AW139 and Bell 412 and Fire Service Kamov helicopters. Akrotiri Station Commander Group Captain Nikki Thomas said: “I would like to thank everyone involved from the personnel of 84 Squadron – on the ground and in the air – to the logistics and engineering wings and sections who worked hard to accommodate and ensure swift refuelling and air movements for military and civilian aircraft brought in to help tackle the blaze.” A 67-year-old man has been remanded in custody on suspicion of having inadvertently caused the fire by burning stubble on his land.

RETIREMENT PLANS: E-3D Sentry is being replaced by new Wedgetail

Fairy tale farewell put on ice CELEBRATING THE 30th birthday of the RAF’s Seven Dwarves has been put on ice due to the coronavirus pandemic. But Air Chiefs hope a parade to honour the Service’s E3-D Sentry fleet – nicknamed Grumpy, Dopey, Doc, Happy, Bashful, Sneezy and Sleepy – will go ahead in October. Probably one of the most iconic and instantly recognisable aircraft in the world, the AWACS has flown on operations in the Balkans and the Gulf and visited 43 countries across the globe. It all began in July 1991 when the RAF received the first of seven aircraft, numbered ZH102. They replaced the much-loved Shackletons, which had adopted names associated with the children’s 1970s classic The Magic Roundabout – subsequently discovered to contain drug references – so the Sentries adopted the safer names of Snow White’s little helpers. Taking over from the venerable ‘Shack’ wasn’t easy but the E-3D first flown by Waddington-based 8 Sqn soon proved itself and initially formed about a quarter of the total Nato Airborne Early Warning force. Little over a year after operational capability was declared its crews saw action over the Balkans and in Northern Iraq during Operation Warden in 1994. In 1998 the Sentry fleet was upgraded under a £120m radar system improvement program and found itself deployed in support of Op Oracle in Afghanistan 2001, Op Telic in Iraq in 2003 and Op Ellamy in Libya in 2011, and it is still supporting Op Shader. And the E-3D remains the only RAF aircraft still flying with an Air Engineer. In 2009 its Operational Conversion Unit – 23 Sqn – was temporarily disbanded and with engineers struggling to maintain the ageing fleet the government announced the Wedgetail will replace the Sentry in 2023, operating from Lossiemouth – the original home of ‘The Shack.’