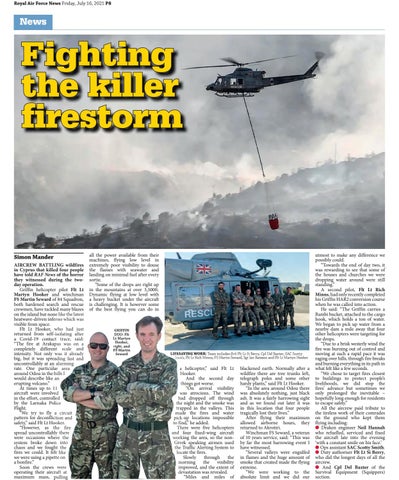 Simon Mander AIRCREW BATTLING wildfires in Cyprus that killed four people have told RAF News of the horror they witnessed during the twoday operation. Griffin helicopter pilot Flt Lt Martyn Hooker and winchman FS Martin Seward of 84 Squadron, both hardened search and rescue crewmen, have tackled many blazes on the island but none like the latest heatwave-driven inferno which was visible from space. Flt Lt Hooker, who had just returned from self-isolating after a Covid-19 contact trace, said: “The fire at Arakapas was on a completely different scale and intensity. Not only was it already big, but it was spreading fast and uncontrollably at an alarming rate. One particular area around Odou in the hills I would describe like an erupting volcano.” At times up to 11 aircraft were involved in the effort, controlled by the Larnaka Police Flight. “We try to fly a circuit pattern for deconfliction and safety,” said Flt Lt Hooker. “However, as the fire spread uncontrollably there were occasions where the system broke down into chaos and we fought the fires we could. It felt like we were using a pipette on a bonfire.” Soon the crews were operating their aircraft at maximum mass, pulling

all the power available from their machines, flying low level in extremely poor visibility to douse the flames with seawater and landing on minimal fuel after every sortie. “Some of the drops are right up in the mountains at over 3,500ft. Dynamic flying at low level with a heavy bucket under the aircraft is challenging. It is however some of the best flying you can do in

a helicopter,” said Flt Lt Hooker. And the second day things got worse. “On arrival visibility was atrocious. The wind had dropped off through the night and the smoke was trapped in the valleys. This made the fires and water pick-up locations impossible to find,” he added. There were five helicopters and four fixed-wing aircraft working the area, so the nonGreek speaking airmen used the Traffic Alerting System to locate the fires. Slowly through the morning the visibility improved, and the extent of devastation was revealed. “Miles and miles of

blackened earth. Normally after a wildfire there are tree trunks left, telegraph poles and some other hardy plants,” said Flt Lt Hooker. “In the area around Odou there was absolutely nothing, just black ash. It was a fairly harrowing sight and as we found out later it was in this location that four people tragically lost their lives.” After flying their maximum allowed airborne hours, they returned to Akrotiri. Winchman FS Seward, a veteran of 10 years service, said: “This was by far the most harrowing event I have witnessed. “Several valleys were engulfed in flames and the huge amount of smoke that created made the flying extreme. “We were working to the absolute limit and we did our

utmost to make any difference we possibly could. “Towards the end of day two, it was rewarding to see that some of the houses and churches we were dropping water around were still standing.” A second pilot, Flt Lt Rich Minns, had only recently completed his Griffin HAR2 conversion course when he was called into action. He said: “The Griffin carries a Bambi bucket, attached to the cargo hook, which holds a ton of water. We began to pick up water from a nearby dam a mile away that four other helicopters were targeting for the drops. “Due to a brisk westerly wind the fire was burning out of control and moving at such a rapid pace it was raging over hills, through fire breaks and burning everything in its path in what felt like a few seconds. “We chose to target fires closest to buildings to protect people’s livelihoods, we did stop the fires’ advance but sometimes we only prolonged the inevitable – hopefully long enough for residents to escape safely.” All the aircrew paid tribute to the tireless work of their comrades on the ground who kept them flying including: l Draken engineer Neil Hannah who refuelled, serviced and fixed the aircraft late into the evening ‘with a constant smile on his face.’ l Ops assistant SAC Scotty Smith. l Duty authoriser Flt Lt Si Berry, who did the longest days of all the aircrew. l And Cpl Del Baxter of the Survival Equipment (Squippers) section.