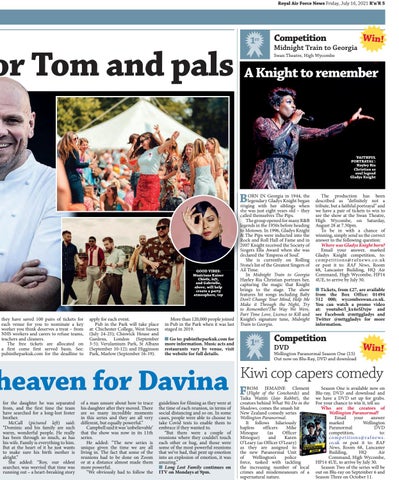 or Tom and pals A Knight to remember Swan Theatre, High Wycombe

they have saved 100 pairs of tickets for each venue for you to nominate a key worker you think deserves a treat – from NHS workers and carers to refuse teams, teachers and cleaners. The free tickets are allocated on a first come first served basis. See: pubintheparkuk.com for the deadline to

of a man unsure about how to trace his daughter after they moved. There are so many incredible moments in this series and they are all very different, but equally powerful.” Campbell said it was ‘unbelievable’ that the show was now in its 11th series. He added: “The new series is unique given the time we are all living in. The fact that some of the reunions had to be done on Zoom or at a distance almost made them more powerful. “We obviously had to follow the

guidelines for filming as they were at the time of each reunion, in terms of social distancing and so on. In some cases, people were able to choose to take Covid tests to enable them to embrace if they wanted to. “But there were a couple of reunions where they couldn’t touch each other or hug, and those were some of the most powerful reunions that we’ve had, that pent up emotion into an explosion of emotion, it was amazing.” ■ Long Lost Family continues on ITV on Mondays at 9pm.

The production has been described as “definitely not a tribute, but a faithful portrayal” and we have a pair of tickets to win to see the show at the Swan Theatre, High Wycombe, on Saturday, August 28 at 7.30pm. To be in with a chance of winning, simply send us the correct answer to the following question: Where was Gladys Knight born? Email your answer, marked Gladys Knight competition, to: c omp e t it i ons @ r af ne w s . c o. u k or post it to: RAF News, Room 68, Lancaster Building, HQ Air Command, High Wycombe, HP14 4UE, to arrive by July 30. ■ Tickets, from £27, are available from the Box Office: 01494 512 000; wycombeswan.co.uk. You can watch a promo video at: youtube/l_kx4oSDzjw and see Facebook @mttggladys and Twitter @mttggladys for more information.

■ Go to: pubintheparkuk.com for more information. Music acts and restaurants vary by venue, visit the website for full details.

heaven for Davina for the daughter he was separated from, and the first time the team have searched for a long-lost foster brother. McCall (pictured left) said: “Dominic and his family are such warm, wonderful people. He really has been through so much, as has his wife. Family is everything to him. But at the heart of it he just wants to make sure his birth mother is alright.” She added: “Roy, our oldest searcher, was worried that time was running out – a heart-breaking story

ORN IN Georgia in 1944, the legendary Gladys Knight began singing with her siblings when she was just eight years old – they called themselves The Pips. The group opened for many R&B legends in the 1950s before heading to Motown. In 1996, Gladys Knight & The Pips were inducted into the Rock and Roll Hall of Fame and in 2007 Knight received the Society of Singers Ella Award when she was declared the ‘Empress of Soul’. She is currently on Rolling Stone’s list of the Greatest Singers of All Time. In Midnight Train to Georgia Hayley Ria Christian portrays her, capturing the magic that Knight brings to the stage. The show features hit songs including Baby Don’t Change Your Mind, Help Me Make it Through the Night, Try to Remember/The Way We Were, Part Time Love, Licence to Kill and Knight’s signature tune, Midnight Train to Georgia.

Wellington Paranormal Season One (15) Out now on Blu-Ray, DVD and download

ROM JEMAINE Clement (Flight of the Conchords) and Taika Waititi (Jojo Rabbit), the creators behind What We Do in the Shadows, comes the smash hit New Zealand comedy series Wellington Paranormal. It follows hilariously hapless officers Mike Minogue (as Officer Minogue) and Karen O’Leary (as Officer O’Leary) as they are assigned to the new Paranormal Unit of Wellington’s police force, tasked with tackling the increasing number of local crimes and misdemeanours of a supernatural nature.

Season One is available now on Blu-ray, DVD and download and we have a DVD set up for grabs. For your chance to win it, tell us: Who are the creators of Wellington Paranormal? Email your answer marked Wellington Paranormal DVD competition, to: comp et it ions@raf ne ws. co.uk or post it to: RAF News, Room 68, Lancaster Building, HQ Air Command, High Wycombe, HP14 4UE, to arrive by July 30. Season Two of the series will be out on Blu-ray on September 6 and Season Three on October 11.