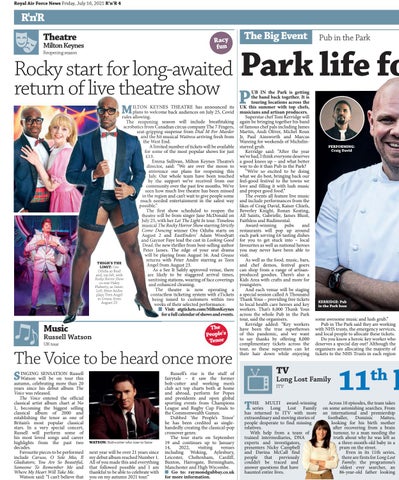 Pub in the Park

ILTON KEYNES THEATRE has announced its plans to welcome back audiences on July 25, Covid rules allowing. The reopening season will include breathtaking acrobatics from Canadian circus company The 7 Fingers, seat-gripping suspense from Dial M For Murder and the hit musical Waitress arriving fresh from the West End. A limited number of tickets will be available for some of the most popular shows for just £13. Emma Sullivan, Milton Keynes Theatre’s director, said: “We are over the moon to announce our plans for reopening this July. Our whole team have been touched by the support we’ve received from our community over the past few months. We’ve seen how much live theatre has been missed in the region and can’t wait to give people some much needed entertainment in the safest way possible.” The first show scheduled to reopen the theatre will be from singer Jane McDonald on July 25, with her Let The Light In tour. Timeless musical The Rocky Horror Show starring Strictly Come Dancing winner Ore Oduba starts on August 2 and EastEnders’ Adam Woodyatt and Gaynor Faye lead the cast in Looking Good Dead, the new thriller from best-selling author Peter James. The edge of your seat drama will be playing from August 16. And Grease returns with Peter Andre starring as Teen THIGH'S THE Angel from August 23. LIMIT: Ore As a See It Safely approved venue, there Oduba as Brad and, top left, with are likely to be staggered arrival times, Rocky Horror Show sanitising stations, wearing of face coverings co-star Haley and enhanced cleaning. Flaherty, as Janet. The theatre is now operating a Left, Peter Andre plays Teen Angel contactless ticketing system with eTickets in Grease, from being issued to customers within two August 23 weeks of their selected performance. ■ Visit: atgtickets.com/MiltonKeynes for a full calendar of shows and events.

The Voice to be heard once more

INGING SENSATION Russell Watson will be on tour this autumn, celebrating more than 20 years since his debut album The Voice was released. The Voice entered the official classical artist album chart at No 1, becoming the biggest selling classical album of 2000 and establishing the tenor as one of Britain’s most popular classical stars. In a very special concert, Russell will perform some of his most loved songs and career highlights from the past two decades. Favourite pieces to be performed include Caruso, O Sole Mio, Il Gladiatore, You Are So Beautiful, Someone To Remember Me and Where My Heart Will Take Me. Watson said: “I can’t believe that

WATSON: Bolt-cutter who rose to fame

next year will be over 21 years since my debut album reached Number 1. All of you made this and everything that followed possible and I am thankful to be able to celebrate with you on my autumn 2021 tour.”

Russell’s rise is the stuff of fairytale – it saw the former bolt-cutter and working men’s club act top charts both at home and abroad, perform for Popes and presidents and open global sporting events from Champions League and Rugby Cup Finals to the Commonwealth Games. Dubbed ‘the People’s Tenor’ he has been credited as singlehandedly creating the classical-pop crossover genre. The tour starts on September 19 and continues up to January 14, 2022, visiting venues including Woking, Aylesbury, Leicester, Cheltenham, Cardiff, Buxton, Harrogate, Birmingham, Manchester and High Wycombe. ■ Go to: raymondgubbay.co.uk for more information.

UB IN the Park is getting the band back together. It is touring locations across the UK this summer with top chefs, musicians and artisan producers. Superstar chef Tom Kerridge will again be bringing together his band of famous chef pals including James Martin, Andi Oliver, Michel Roux Jr, Paul Ainsworth and Marcus Wareing for weekends of Michelinstarred grub. Kerridge said: “After the year we’ve had, I think everyone deserves a good knees up – and what better way to do it than Pub in the Park? “We’re so excited to be doing what we do best, bringing back our feel-good festival to the towns we love and filling it with lush music and proper good food.” The events all feature live music and include performances from the likes of Craig David, Kaiser Chiefs, Beverley Knight, Ronan Keating, All Saints, Gabrielle, James Blunt, Faithless and Rudimental. Award-winning pubs and restaurants will pop up around each park serving £6 tasting dishes for you to get stuck into – local favourites as well as national heroes you may never have been able to visit. As well as the food, music, bars, and chef demos, festival goers can shop from a range of artisanproduced goodies. There’s also a Kids Area with crafts and more for youngsters. And each venue will be staging a special session called A Thousand Thank Yous – providing free tickets to local health care heroes and key workers. That’s 8,000 Thank Yous across the whole Pub in the Park tour, said the organisers. Kerridge added: “Key workers have been the true superheroes of this pandemic, and we want to say thanks by offering 8,000 complimentary tickets across the tour, so these superstars can let their hair down while enjoying

KERRIDGE: Pub in the Park boss

some awesome music and lush grub.” Pub in The Park said they are working with NHS trusts, the emergency services, and local people to allocate these tickets. Do you know a heroic key worker who deserves a special day out? Although the organisers are allocating the majority of tickets to the NHS Trusts in each region

HE MULTI award-winning series Long Lost Family has returned to ITV with more extraordinary and moving stories of people desperate to find missing relatives. With help from a team of trained intermediaries, DNA experts and investigators, presenters Nicky Campbell and Davina McCall find people that previously couldn’t be traced and answer questions that have haunted entire lives.

Across 10 episodes, the team takes on some astonishing searches. From an international and premiership footballer, Dominic Matteo, looking for his birth mother after recovering from a brain tumour, to a man needing the truth about why he was left as a three-month-old baby in a pram on the street. Even in its 11th series, there are firsts for Long Lost Family; the programme’s oldest ever searcher, an 86-year-old father looking