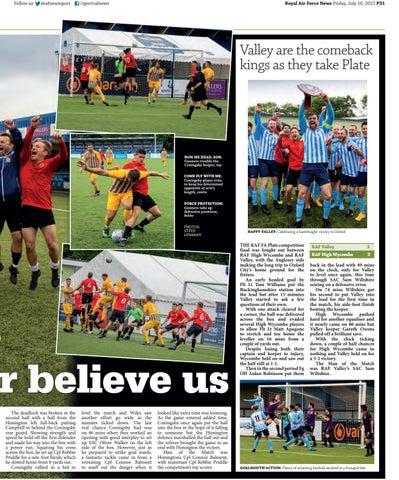 Valley are the comeback kings as they take Plate

r believe us The deadlock was broken in the second half with a ball from the Honington left full-back putting Campbell in behind the Coningsby rear guard. Showing strength and speed he held off the first defender and made his way into the box with a power run. Squaring his cross across the box, he set up Cpl Robbie Priddle for a side-foot finish, which he slotted home from 8 yards out. Coningsby rallied in a bid to

level the match and Wiles saw another effort go wide as the minutes ticked down. The last real chance Coningsby had was on 86 mins when they worked an opening with good interplay to set up SAC Oliver Walker on the left side of the box. However, just as he prepared to strike goal wards, a fantastic tackle came in from a retreating Cpl Connor Balment to snuff out the danger when it

looked like extra time was looming. As the game entered added time, Coningsby once again put the ball into the box in the hope of it falling to someone but the Honington defence marshalled the ball out and the referee brought the game to an end with Honington the victors. Man of the Match was Honington’s Cpl Connor Balment, with teammate Cpl Robbie Priddle the competition’s top scorer.

THE RAF FA Plate competition final was fought out between RAF High Wycombe and RAF Valley, with the Anglesey side making the long trip to Oxford City’s home ground for the fixture. An early headed goal by Flt Lt Tom Williams put the Buckinghamshire station into the lead but after 15 minutes Valley started to ask a few questions of their own. With one attack cleared for a corner, the ball was delivered across the box and evaded several High Wycombe players to allow Flt Lt Matt Apagone to stretch and toe home the leveller on 16 mins from a couple of yards out. Despite losing both their captain and keeper to injury, Wycombe held on and saw out the half still at 1-1. Then in the second period Fg Off Aidan Robinson put them

back in the lead with 49 mins on the clock, only for Valley to level once again, this time through SAC Sam Wiltshire seizing on a defensive error. On 74 mins Wiltshire got his second to put Valley into the lead for the first time in the match, his side-foot finish beating the keeper. High Wycombe pushed hard for another equaliser and it nearly came on 86 mins but Valley keeper Gareth Owens pulled off a brilliant save. With the clock ticking down, a couple of half chances for High Wycombe came to nothing and Valley held on for a 3-2 victory. The Man of the Match was RAF Valley’s SAC Sam Wiltshire.