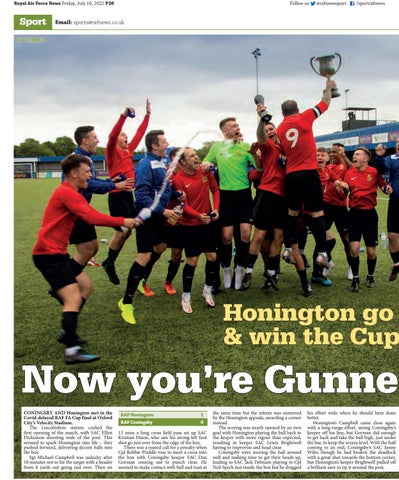 Now you’re Gunner CONINGSBY AND Honington met in the Covid-delayed RAF FA Cup final at Oxford City’s Velocity Stadium. The Lincolnshire station crafted the first opening of the match, with SAC Elliot Dickinson shooting wide of the post. This seemed to spark Honington into life – they pushed forward, delivering decent balls into the box. Sgt Michael Campbell was unlucky after 10 minutes not to hit the target with a header from 8 yards out going just over. Then on

13 mins a long cross field pass set up SAC Kristian Dixon, who saw his strong left foot shot go just over from the edge of the box. There was a muted call for a penalty when Cpl Robbie Priddle rose to meet a cross into the box with Coningsby keeper SAC Dan Gorman coming out to punch clear. He seemed to make contact with ball and man at

the same time but the referee was unmoved by the Honington appeals, awarding a corner instead. The scoring was nearly opened by an own goal with Honington playing the ball back to the keeper with more vigour than expected, resulting in keeper SAC Lewis Brightwell having to improvise and head clear. Coningsby were moving the ball around well and making time to get their heads up, leading to SAC Jack Debnam playing in Cpl Neil Speck just inside the box but he dragged

his effort wide when he should have done better. Honington’s Campbell came close again with a long-range effort, seeing Coningsby’s keeper off his line, but Gorman did enough to get back and take the ball high, just under the bar, to keep the scores level. With the half coming to an end, Coningsby’s SAC Jonny Wiles though he had broken the deadlock with a great shot towards the bottom corner, but Honington’s keeper Brightwell pulled off a brilliant save to tip it around the post.