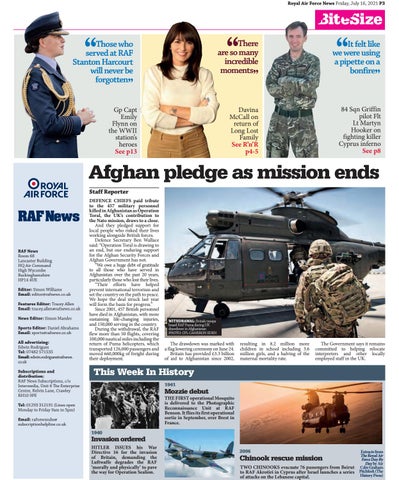 There are so many incredible moments”

It felt like we were using a pipette on a bonfire”

DEFENCE CHIEFS paid tribute to the 457 military personnel killed in Afghanistan as Operation Toral, the UK’s contribution to the Nato mission, draws to a close. And they pledged support for local people who risked their lives working alongside British forces. Defence Secretary Ben Wallace said: “Operation Toral is drawing to an end, but our enduring support for the Afghan Security Forces and Afghan Government has not. “We owe a huge debt of gratitude to all those who have served in Afghanistan over the past 20 years, particularly those who lost their lives. “Their efforts have helped prevent international terrorism and set the country on the path to peace. We hope the deal struck last year will form the basis for progress.” Since 2001, 457 British personnel have died in Afghanistan, with more sustaining life-changing injuries, and 150,000 serving in the country. During the withdrawal, the RAF flew more than 50 flights, covering 100,000 nautical miles including the return of Puma helicopters, which transported 126,000 passengers and moved 660,000kg of freight during their deployment.

The drawdown was marked with a flag lowering ceremony on June 24. Britain has provided £3.3 billion of aid to Afghanistan since 2002,

resulting in 8.2 million more children in school including 3.6 million girls, and a halving of the maternal mortality rate.

The Government says it remains committed to helping relocate interpreters and other locally employed staff in the UK.

THE FIRST operational Mosquito is delivered to the Photographic Reconnaissance Unit at RAF Benson. It flies its first operational sortie in September, over Brest in France.

Invasion ordered HITLER ISSUES his War Directive 16 for the invasion of Britain, demanding the Luftwaffe degrades the RAF ‘morally and physically’ to pave the way for Operation Sealion.

Chinook rescue mission TWO CHINOOKS evacuate 76 passengers from Beirut to RAF Akrotiri in Cyprus after Israel launches a series of attacks on the Lebanese capital.