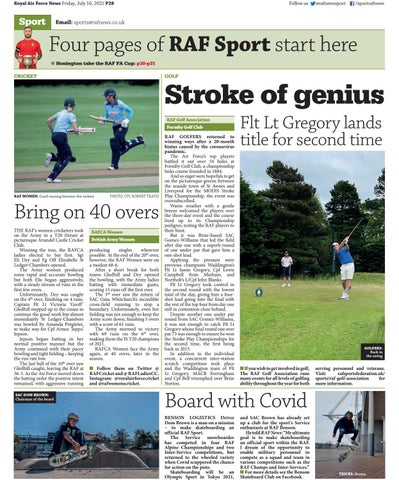 Bring on 40 overs THE RAF's women cricketers took on the Army in a T20 fixture at picturesque Arundel Castle Cricket Club. Winning the toss, the RAFCA ladies elected to bat first. Sgt Eli Dey and Fg Off Elizabelle St Ledger-Chambers opened. The Army women produced some rapid and accurate bowling but both Elis began aggressively, with a steady stream of runs in the first few overs. Unfortunately, Dey was caught on the 4th over, finishing on 4 runs. Captain Flt Lt Victoria ‘Geoff ’ Gledhill stepped up to the crease to continue the good work but almost immediately St Ledger-Chambers was bowled by Amanda Potgieter, to make way for Cpl Aimee ‘Jeppo’ Jepson. Jepson began batting in her normal positive manner but the Army continued with their pacey bowling and tight fielding – keeping the run rate low. The last ball of the 10th over saw Gledhill caught, leaving the RAF at 36-3. As the Air Force moved down the batting order the positive intent remained, with aggressive running SAC DOM BROWN: Chairman of the board

RAFCA Women British Army Women producing singles wherever possible. At the end of the 20th over, however, the RAF Women were on a modest 68-6. After a short break for both teams Gledhill and Dey opened the bowling, with the Army ladies batting with immediate gusto, scoring 15 runs off the first over. The 3rd over saw the return of SAC Gina Whitchurch’s incredible cross-field running to stop a boundary. Unfortunately, even her fielding was not enough to keep the Army score down, finishing 5 overs with a score of 61 runs. The Army stormed to victory with 69 runs on the 6th over, making them the IS T20 champions of 2021. RAFCA Women face the Army again, at 40 overs, later in the season. n Follow them on Twitter @ RAFCricket and @ RAFLadiesCC. Instagram: @royalairforcecricket and @rafwomenscricket.

RAF GOLFERS returned to winning ways after a 20-month hiatus caused by the coronavirus pandemic. The Air Force’s top players battled it out over 54 holes at Formby Golf Club, a championship links course founded in 1884. And so eager were hopefuls to get on the picturesque greens between the seaside town of St Annes and Liverpool for the MODIS Stroke Play Championship, the event was oversubscribed. Warm weather with a gentle breeze welcomed the players over the three-day event and the course lived up to its Championship pedigree, testing the RAF players to their limit. But it was Brize-based SAC Gomez-Williams that led the field after day one with a superb round of one under par that gave him a one-shot lead. Applying the pressure were previous champions Waddington’s Flt Lt Jamie Gregory, Cpl Lewis Campbell from Marham, and Northolt’s L/Cpl John Blanks. Flt Lt Gregory took control in the second round with the lowest total of the day, giving him a fourshot lead going into the final with the rest of the top four from day one still in contention close behind. Despite another one under par round from SAC Gomez-Williams, it was not enough to catch Flt Lt Gregory whose final round one over par 73 was enough to ensure he won the Stroke Play Championships for the second time, the first being back in 2015. In addition to the individual event, a concurrent inter-station scratch competition took place and the Waddington team of Flt Lt Gregory, MACR Everingham and Cpl Bell triumphed over Brize Norton.

GOLFERS: Back in the swing

n If you wish to get involved in golf, The RAF Golf Association runs many events for all levels of golfing ability throughout the year for both

Board with Covid BENSON LOGISTICS Driver Dom Brown is a man on a mission – to make skateboarding an official RAF Sport. The Service snowboarder has competed in four RAF Alpine Championships and two Inter-Service competitions, but returned to the wheeled variety when Covid scuppered the chance for action on the piste. Skateboarding will be an Olympic Sport in Tokyo 2021,

and SAC Brown has already set up a club for the sport's Service enthusiasts at RAF Benson. He told RAF News: “My ultimate goal is to make skateboarding an official sport within the RAF. I dream of the opportunity to enable military personnel to compete as a squad and team in various competitions such as the RAF Champs and Inter-Services.” n For more details see the Benson Skateboard Club on Facebook.