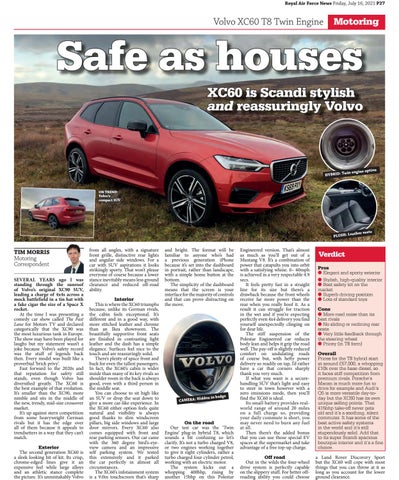 Safe as houses XC60 is Scandi stylish and reassuringly Volvo

TIM MORRIS Motoring Correspondent SEVERAL YEARS ago I was standing through the sunroof of Volvo’s original XC90 SUV, leading a charge of 4x4s across a mock battlefield in a tin hat with a fake cigar the size of a Space X rocket. At the time I was presenting a comedy car show called The Fast Lane for Motors TV and declared categorically that the XC90 was the most luxurious tank in Europe. The show may have been played for laughs but my statement wasn’t a joke because Volvo’s safety record was the stuff of legends back then. Every model was built like a proverbial ‘brick privy’. Fast forward to the 2020s and that reputation for safety still stands, even though Volvo has diversified greatly. The XC60 is the best example of that evolution. It’s smaller than the XC90, more nimble and sits in the middle of the new, trendy, mid-size crossover market. It’s up against stern competition from some heavyweight German rivals but it has the edge over all of them because it appeals to trendsetters in a way that they can’t match. Exterior The second generation XC60 is a sleek looking bit of kit. Its crisp, chrome-edged lines give it an expensive feel while large alloys and an athletic stance complete the picture. It’s unmistakably Volvo

from all angles, with a signature front grille, distinctive rear lights and angular side windows. For a car with SUV aspirations it looks strikingly sporty. That won’t please everyone of course because a lower stance inevitably means less ground clearance and reduced off-road ability. Interior This is where the XC60 triumphs because, unlike its German rivals, the cabin feels exceptional. It’s different and in a good way, with more stitched leather and chrome than an Ikea showroom. The beautifully supportive front seats are finished in contrasting light leather and the dash has a simple elegance. Surfaces feel nice to the touch and are reassuringly solid. There’s plenty of space front and back for even the tallest passengers. In fact, the XC60’s cabin is wider inside than many of its key rivals so shoulder room in the back is always good, even with a third person in the middle seat. You can choose to sit high like an SUV or drop the seat down to give a more car-like experience. In the XC60 either option feels quite natural and visibility is always good thanks to slim windscreen pillars, big side windows and large door mirrors. Every XC60 also comes equipped with front and rear parking sensors. Our car came with the 360 degree bird’s-eyeview camera and an impressive self parking system. We tested this extensively and it parked the car perfectly in almost all circumstances. The XC60’s infotainment system is a 9.0in touchscreen that’s sharp

and bright. The format will be familiar to anyone who’s had a previous generation iPhone because it’s set into the dashboard in portrait, rather than landscape, with a simple home button at the bottom. The simplicity of the dashboard means that the screen is your interface for the majority of controls and that can prove distracting on the move.

On the road Our test car was the ‘Twin Engine’ plug-in hybrid T8, which sounds a bit confusing so let’s clarify. It’s not a turbo charged V8, or two engines working together to give it eight cylinders, rather a turbo charged four cylinder petrol, working with an electric motor. The system kicks out a whopping 400bhp, rising by another 15bhp on this Polestar

Engineered version. That’s almost as much as you’ll get out of a Mustang V8. It’s a combination of power that catapults you into orbit with a satisfying whine. 0– 60mph is achieved in a very respectable 4.9 secs. It feels pretty fast in a straight line for its size but there’s a drawback because the front wheels receive far more power than the rear when you really hoof it. As a result it can struggle for traction in the wet and if you’re expecting perfectly even 4x4 delivery you find yourself unexpectedly clinging on for dear life. The stiff suspension of the Polestar Engineered car reduces body lean and helps it grip the road well. The pay-off is slightly reduced comfort on undulating roads of course but, with hefty power delivery so readily on tap, I’d rather have a car that corners sharply thank you very much. If what you want is a securehandling SUV that’s light and easy to steer in town however with a zero emissions mode, then you’ll find the XC60 is ideal. Its small battery provides realworld range of around 20 miles on a full charge so, providing your daily commute is short, you may never need to burn any fuel at all. Then there’s the added bonus that you can use those special EV spaces at the supermarket and take advantage of a free top-up charge. Off road Out in the wilds the four-wheel drive system is perfectly capable on the slippery stuff. For better offroading ability you could choose

Verdict Pros l Elegant and sporty exterior l Stylish, high-quality interior l Best safety kit on the market l Superb driving position l Lots of standard toys Cons l More road noise than its best rivals l No sliding or reclining rear seats l Very little feedback through the steering wheel l Pricey (in T8 form) Overall Prices for the T8 hybrid start at around £57,000, a whopping £10k over the base diesel, so it faces stiff competition from premium rivals. Porsche’s Macan is much more fun to drive for example and Audi’s Q5 is more versatile day-today but the XC60 has its own unique selling points. That 415bhp take-off never gets old and it’s a soothing, silent commuter. It has some of the best active safety systems in the world and it’s still stupendously solid. Add that to its super Scandi spacious boutique interior and it’s a fine choice. a Land Rover Discovery Sport but the XC60 will cope with most things that you can throw at it as long as you account for the lower ground clearance.