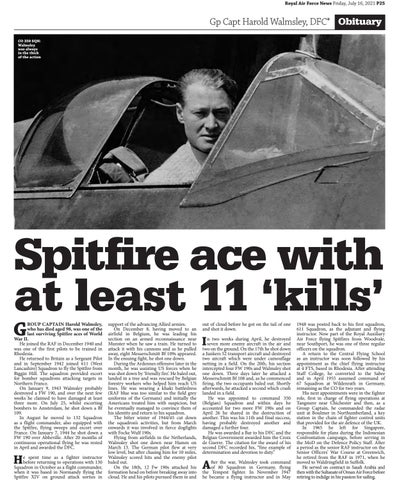 Spitfire ace with at least 11 ‘kills’

ROUP CAPTAIN Harold Walmsley, who has died aged 98, was one of the last surviving Spitfire aces of World War II. He joined the RAF in December 1940 and was one of the first pilots to be trained in Rhodesia. He returned to Britain as a Sergeant Pilot and in September 1942 joined 611 (West Lancashire) Squadron to fly the Spitfire from Biggin Hill. The squadron provided escort for bomber squadrons attacking targets in Northern France. On January 9, 1943 Walmsley probably destroyed a FW 190, and over the next few weeks he claimed to have damaged at least three more. On July 25, whilst escorting bombers to Amsterdam, he shot down a Bf 109. In August he moved to 132 Squadron as a flight commander, also equipped with the Spitfire, flying sweeps and escort over France. On January 7, 1944 he shot down a FW 190 over Abbeville. After 20 months of continuous operational flying he was rested in April and awarded the DFC.

e spent time as a fighter instructor before returning to operations with 130 Squadron in October as a flight commander, when it was based in Normandy flying the Spitfire XIV on ground attack sorties in

support of the advancing Allied armies. On December 8, having moved to an airfield in Belgium, he was leading his section on an armed reconnaissance near Munster when he saw a train. He turned to attack it with his cannons and as he pulled away, eight Messerschmitt Bf 109s appeared. In the ensuing fight, he shot one down. During the Ardennes offensive later in the month, he was assisting US forces when he was shot down by ‘friendly fire’. He baled out, landed in a tree and was rescued by Belgian forestry workers who helped him reach US lines. He was wearing a khaki battledress (RAF blue was too similar to the field grey uniforms of the Germans) and initially the Americans treated him with suspicion, but he eventually managed to convince them of his identity and return to his squadron. The bitter winter of 1944/45 cut down the squadron’s activities, but from March onwards it was involved in fierce dogfights with Focke Wulf 190s. Flying from airfields in the Netherlands, Walmsley shot one down near Hamm on March 13. The German pilot flew at very low level, but after chasing him for 10 miles, Walmsley scored hits and the enemy pilot baled out. On the 18th, 12 Fw 190s attacked his formation head on before breaking away into cloud. He and his pilots pursued them in and

out of cloud before he got on the tail of one and shot it down.

n two weeks during April, he destroyed seven more enemy aircraft in the air and two on the ground. On the 17th he shot down a Junkers 52 transport aircraft and destroyed two aircraft which were under camouflage netting in a field. On the 20th, his section intercepted four FW 190s and Walmsley shot one down. Three days later he attacked a Messerschmitt Bf 108 and, as he commenced firing, the two occupants baled out. Shortly afterwards, he attacked a second which crash landed in a field. He was appointed to command 350 (Belgian) Squadron and within days he accounted for two more FW 190s and on April 26 he shared in the destruction of another. This was his 11th and final success, having probably destroyed another and damaged a further four. He was awarded a Bar to his DFC and the Belgian Government awarded him the Croix de Guerre. The citation for the award of his second DFC recorded his, “fine example of determination and devotion to duty.”

fter the war, Walmsley took command of 80 Squadron in Germany, flying the Tempest fighter. In November 1947 he became a flying instructor and in May

1948 was posted back to his first squadron, 611 Squadron, as the adjutant and flying instructor. Now part of the Royal Auxiliary Air Force flying Spitfires from Woodvale, near Southport, he was one of three regular officers on the squadron. A return to the Central Flying School as an instructor was soon followed by his appointment as the chief flying instructor at 4 FTS, based in Rhodesia. After attending Staff College, he converted to the Sabre and in April 1955 assumed command of 67 Squadron at Wildenrath in Germany, remaining as the CO for two years. His next appointments were in the fighter role, first in charge of flying operations at Tangmere near Chichester and then, as a Group Captain, he commanded the radar unit at Boulmer in Northumberland, a key station in the chain of fighter control units that provided for the air defence of the UK. In 1965 he left for Singapore, responsible for plans during the Indonesian Confrontation campaign, before serving in the MoD on the Defence Policy Staff. After a period as the senior RAF instructor on the Senior Officers’ War Course at Greenwich, he retired from the RAF in 1971, when he moved to Waldringfield in Suffolk. He served on contract in Saudi Arabia and then with the Sultanate of Oman Air Force before retiring to indulge in his passion for sailing.