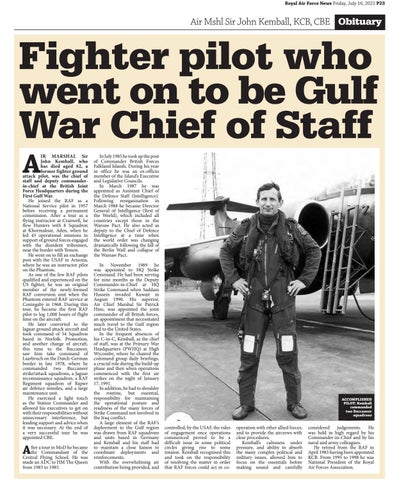 IR MARSHAL Sir John Kemball, who has died aged 82, a former fighter ground attack pilot, was the chief of staff and deputy commanderin-chief at the British Joint Force Headquarters during the First Gulf War. He joined the RAF as a National Service pilot in 1957 before receiving a permanent commission. After a tour as a flying instructor at Cranwell, he flew Hunters with 8 Squadron at Khormaksar, Aden, when he led 43 operational missions in support of ground forces engaged with the dissident tribesmen, near the border with Yemen. He went on to fill an exchange post with the USAF in Arizona, where he was an instructor pilot on the Phantom. As one of the few RAF pilots qualified and experienced on the US fighter, he was an original member of the newly-formed RAF conversion unit when the Phantom entered RAF service at Coningsby in 1968. During this tour, he became the first RAF pilot to log 1,000 hours of flight time on the aircraft. He later converted to the Jaguar ground attack aircraft and took command of 54 Squadron based in Norfolk. Promotion, and another change of aircraft, this time to the Buccaneer, saw him take command of Laarbruch on the Dutch-German border in late 1978, where he commanded two Buccaneer strike/attack squadrons, a Jaguar reconnaissance squadron, a RAF Regiment squadron of Rapier air defence missiles, and a large maintenance unit. He exercised a light touch as the Station Commander and allowed his executives to get on with their responsibilities without unnecessary interference, but lending support and advice when it was necessary. At the end of a very successful tour he was appointed CBE.

fter a tour in MoD he became the Commandant of the Central Flying School. He was made an ADC to HM The Queen from 1983 to 1985.

In July 1985 he took up the post of Commander British Forces Falkland Islands. During his year in office he was an ex-officio member of the Island’s Executive and Legislative Councils. In March 1987 he was appointed as Assistant Chief of the Defence Staff (Intelligence). Following reorganisation in March 1988 he became Director General of Intelligence (Rest of the World), which included all countries except those in the Warsaw Pact. He also acted as deputy to the Chief of Defence Intelligence at a time when the world order was changing dramatically following the fall of the Berlin Wall and collapse of the Warsaw Pact. In November 1989 he was appointed to HQ Strike Command. He had been serving for nine months as the Deputy Commander-in-Chief at HQ Strike Command when Saddam Hussein invaded Kuwait in August 1990. His superior, Air Chief Marshal Sir Patrick Hine, was appointed the joint commander of all British forces, an appointment that necessitated much travel to the Gulf region and to the United States. In the frequent absences of his C-in-C, Kemball, as the chief of staff, was at the Primary War Headquarters (PWHQ) at High Wycombe, where he chaired the command group daily briefings, a crucial role during the build-up phase and then when operations commenced with the first air strikes on the night of January 17, 1991. In addition, he had to shoulder the routine, but essential, responsibility for maintaining the operational posture and readiness of the many forces of Strike Command not involved in the Iraq conflict. A large element of the RAF’s deployment to the Gulf region was drawn from RAF squadrons and units based in Germany and Kemball and his staff had to maintain a close liaison to coordinate deployments and reinforcements. With the overwhelming air contribution being provided, and

controlled, by the USAF, the rules of engagement once operations commenced proved to be a difficult issue in some political circles giving rise to some tension. Kemball recognised this and took on the responsibility of resolving the matter in order that RAF forces could act in co-

operation with other allied forces, and to provide the aircrews with clear procedures. Kemball’s calmness under pressure, and ability to absorb the many complex political and military issues, allowed him to focus on the essentials before making sound and carefully

considered judgements. He was held in high regard by his Commander-in-Chief and by his naval and army colleagues. He retired from the RAF in April 1983 having been appointed KCB. From 1995 to 1998 he was National President of the Royal Air Forces Association.