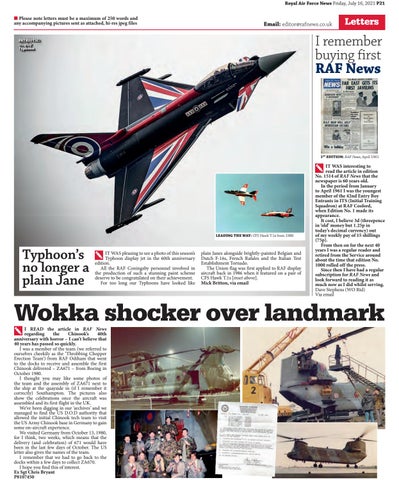 Typhoon’s no longer a plain Jane

IT WAS pleasing to see a photo of this season’s Typhoon display jet in the 60th anniversary edition. All the RAF Coningsby personnel involved in the production of such a stunning paint scheme deserve to be congratulated on their achievement. For too long our Typhoons have looked like

plain Janes alongside brightly-painted Belgian and Dutch F-16s, French Rafales and the Italian Test Establishment Tornado. The Union flag was first applied to RAF display aircraft back in 1986 when it featured on a pair of CFS Hawk T.1s [inset above]. Mick Britton, via email

IT WAS interesting to read the article in edition No. 1514 of RAF News that the newspaper is 60 years old. In the period from January to April 1961 I was the youngest member of the 42nd Entry Boy Entrants in ITS (Initial Training Squadron) at RAF Cosford, when Edition No. 1 made its appearance. It cost, I believe 3d (threepence in ‘old’ money but 1.25p in today’s decimal currency) out of my weekly pay of 15 shillings (75p). From then on for the next 40 years I was a regular reader and retired from the Service around about the time that edition No. 1000 rolled off the press. Since then I have had a regular subscription for RAF News and look forward to reading it as much now as I did whilst serving. Dave Stephens (WO Rtd) Via email

I READ the article in RAF News regarding the Chinook’s 40th anniversary with horror – I can’t believe that 40 years has passed so quickly. I was a member of the team (we referred to ourselves cheekily as the ‘Throbbing Chopper Erection Team’) from RAF Odiham that went to the docks to receive and assemble the first Chinook delivered – ZA671 – from Boeing in October 1980. I thought you may like some photos of the team and the assembly of ZA671 next to the ship at the quayside in (if I remember it correctly) Southampton. The pictures also show the celebrations once the aircraft was assembled and its first flight in the UK. We’ve been digging in our ‘archives’ and we managed to find the US D.O.D authority that allowed the initial Chinook tech team to visit the US Army Chinook base in Germany to gain some on-aircraft experience. We visited Germany from October 13, 1980, for I think, two weeks, which means that the delivery (and celebration) of 671 would have been in the last few days of October. The US letter also gives the names of the team. I remember that we had to go back to the docks within a few days to collect ZA670. I hope you find this of interest. Ex Sgt Chris Bryant P8107450