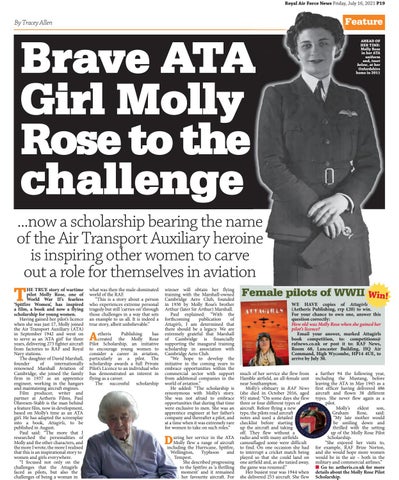 AHEAD OF HER TIME: Molly Rose in her ATA uniform and, inset below, at her Oxfordshire home in 2011

...now a scholarship bearing the name of the Air Transport Auxiliary heroine is inspiring other women to carve out a role for themselves in aviation

HE TRUE story of wartime pilot Molly Rose, one of World War II’s fearless ‘Spitfire Women’, has inspired a film, a book and now a flying scholarship for young women. Having gained her pilot’s licence when she was just 17, Molly joined the Air Transport Auxiliary (ATA) in September 1942 and went on to serve as an ‘ATA girl’ for three years, delivering 273 fighter aircraft from factories to RAF and Royal Navy stations. The daughter of David Marshall, founder of internationally renowned Marshall Aviation of Cambridge, she joined the family firm in 1937 as an apprentice engineer, working in the hangars and maintaining aircraft engines. Film producer, writer and partner at Aetheris Films, Paul Olavesen-Stabb is the man behind a feature film, now in development, based on Molly’s time as an ATA girl. He has adapted the screenplay into a book, Attagirls, to be published in August. Paul said: “The more that I researched the personalities of Molly and the other characters, and the more I wrote, the more I realised that this is an inspirational story to women and girls everywhere. “I focused not only on the challenges that the Attagirls faced as pilots, but also the challenges of being a woman in

what was then the male-dominated world of the RAF. “This is a story about a person who experiences extreme personal tragedy but still ‘carries on’ through those challenges in a way that sets an example to us all. It is indeed a true story, albeit unbelievable.”

etheris Publishing has created the Molly Rose Pilot Scholarship, an initiative to encourage young women to consider a career in aviation, particularly as a pilot. The scholarship awards a full Private Pilot’s Licence to an individual who has demonstrated an interest in flying as a career. The successful scholarship

winner will obtain her flying training with the Marshall-owned Cambridge Aero Club, founded in 1930 by Molly Rose’s brother Arthur (later Sir Arthur) Marshall. Paul explained: “With the forthcoming publication of Attagirls, I am determined that there should be a legacy. We are extremely grateful that Marshall of Cambridge is financially supporting the inaugural training scholarship in association with Cambridge Aero Club. “We hope to develop the initiative in the coming years to embrace opportunities within the commercial sector with support from additional companies in the world of aviation.” He added: “The scholarship is synonymous with Molly’s story. She was not afraid to embrace opportunities that during that time were exclusive to men. She was an apprentice engineer at her father’s company and thereafter a pilot, and at a time when it was extremely rare for women to take on such roles.”

uring her service in the ATA Molly flew a range of aircraft including the Hurricane, Spitfire, Wellington, Typhoon and Tempest. She described progressing to the Spitfire as ‘a thrilling moment’ and it remained her favourite aircraft. For

Female pilots of WWII Win! WE HAVE copies of Attagirls (Aetheris Publishing, rrp £20) to win. For your chance to own one, answer this question correctly: How old was Molly Rose when she gained her pilot’s licence? Email your answer, marked Attagirls book competition, to: competitions@ rafnews.co.uk or post it to: RAF News, Room 68, Lancaster Building, HQ Air Command, High Wycombe, HP14 4UE, to arrive by July 30.

much of her service she flew from Hamble airfield, an all-female unit near Southampton. Molly’s obituary in RAF News (she died in October 2016, aged 95) stated: “On some days she flew three or four different types of aircraft. Before flying a new type, the pilots read aircraft notes and used a detailed checklist before starting up the aircraft and taking off. They flew without a radio and with many airfields camouflaged some were difficult to find. On one occasion she had to interrupt a cricket match being played so that she could land on one airfield and, as she taxied away, the game was resumed.” Her busiest year was 1944 when she delivered 253 aircraft. She flew

a further 94 the following year, including the Mustang, before leaving the ATA in May 1945 as a first officer having delivered 486 aircraft and flown 38 different types. She never flew again as a pilot. Molly’s eldest son, Graham Rose, said: “My late mother would be smiling down and thrilled with the setting up of the Molly Rose Pilot Scholarship. “She enjoyed her visits to, for example, RAF Brize Norton, and she would hope more women would be in the air – both in the military and commercial airlines.” n Go to: aetheris.co.uk for more details about the Molly Rose Pilot Scholarship.