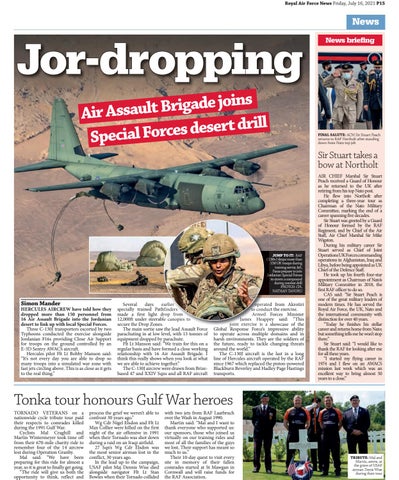 HERCULES AIRCREW have told how they dropped more than 150 personnel from 16 Air Assault Brigade into the Jordanian desert to link up with local Special Forces. Three C-130J transporters escorted by two Typhoons conducted the exercise alongside Jordanian F16s providing Close Air Support for troops on the ground controlled by an E-3D Sentry AWACS aircraft. Hercules pilot Flt Lt Bobby Manson said: “It’s not every day you are able to drop so many troops into a simulated war zone with fast jets circling above. This is as close as it gets to the real thing.”

Several days earlier specially trained Pathfinders made a first light drop from 12,000ft under steerable canopies to secure the Drop Zones. The main sortie saw the lead Assault Force parachuting in at low level, with 15 tonnes of equipment dropped by parachute. Flt Lt Manson said: “We train for this on a regular basis and have formed a close working relationship with 16 Air Assault Brigade. I think this really shows when you look at what we are able to achieve together.” The C-130J aircrew were drawn from Brizebased 47 and XXIV Sqns and all RAF aircraft

operated from Akrotiri to conduct the exercise. Armed Forces Minister James Heappey said: “This joint exercise is a showcase of the Global Response Force’s impressive ability to operate across multiple domains and in harsh environments. They are the soldiers of the future, ready to tackle changing threats around the world.” The C-130J aircraft is the last in a long line of Hercules aircraft operated by the RAF since 1967 which replaced the piston-powered Blackburn Beverley and Hadley Page Hastings transports.

AIR CHIEF Marshal Sir Stuart Peach received a Guard of Honour as he returned to the UK after retiring from his top Nato post. He flew into Northolt after completing a three-year tour as Chairman of the Nato Military Committee, marking the end of a career spanning five decades. Sir Stuart was greeted by a Guard of Honour formed by the RAF Regiment, and by Chief of the Air Staff, Air Chief Marshal Sir Mike Wigston. During his military career Sir Stuart served as Chief of Joint Operations UK Forces commanding operations in Afghanistan, Iraq and Libya, before being appointed as UK Chief of the Defence Staff. He took up his fourth four-star appointment as Chairman of Nato’s Military Committee in 2018, the first RAF officer to do so. CAS said: “Sir Stuart Peach is one of the great military leaders of modern times. He has served the Royal Air Force, the UK, Nato and the international community with distinction for over 40 years. “Today he finishes his stellar career and returns home from Nato; but something tells me he won’t stop there.” Sir Stuart said: “I would like to thank the RAF for looking after me for all these years. “I started my flying career in 1974 and I flew on an AWACS mission last week which was an excellent way to bring almost 50 years to a close.”

TORNADO VETERANS on a nationwide cycle tribute tour paid their respects to comrades killed during the 1991 Gulf War. Cyclists Mal Craghill and Martin Wintermeyer took time off from their 670-mile charity ride to remember four of the 14 aircrew lost during Operation Granby. Mal said: “We have been preparing for this ride for almost a year, so it is great to finally get going. “The ride will give us both the opportunity to think, reflect and

process the grief we weren’t able to confront 30 years ago.” Wg Cdr Nigel Elsdon and Flt Lt Max Collier were killed on the first night of the air offensive in 1991 when their Tornado was shot down during a raid on an Iraqi airfield. 27 Sqn’s Wg Cdr Elsdon was the most senior airman lost in the conflict, 30 years ago. In the lead up to the campaign, USAF pilot Maj Dennis Wise died alongside navigator Flt Lt Stan Bowles when their Tornado collided

with two jets from RAF Laarbruch over the Wash in August 1990. Martin said: “Mal and I want to thank everyone who supported us: our sponsors, those who joined us virtually on our training rides and most of all the families of the guys we lost. Their support has meant so much to us.” Their 10-day quest to visit every site in memory of their fallen comrades started at St Mawgan in Cornwall and will raise funds for the RAF Association.

TRIBUTE: Mal and Martin, centre, at the grave of USAF airman Denis Wise during their tour