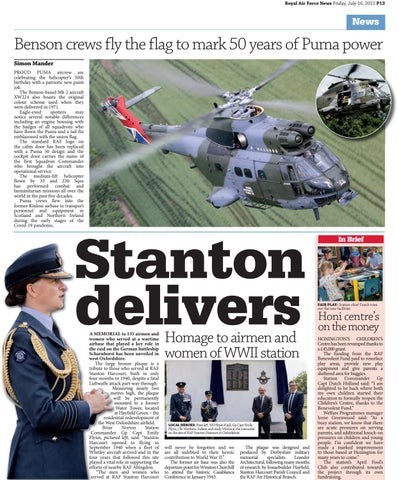 Benson crews fly the flag to mark 50 years of Puma power Simon Mander PROUD PUMA aircrew are celebrating the helicopter’s 50th birthday with a patriotic new paint job. The Benson-based Mk 2 aircraft XW224 also boasts the original colour scheme used when they were delivered in 1971. Eagle-eyed spotters may notice several notable differences including an engine housing with the badges of all squadrons who have flown the Puma and a tail fin emblazoned with the union flag. The standard RAF logo on the cabin door has been replaced with a Puma 50 design and the cockpit door carries the name of the first Squadron Commander who brought the aircraft into operational service. The medium-lift helicopter flown by 33 and 230 Sqns has performed combat and humanitarian missions all over the world in the past five decades. Puma crews flew into the former Kinloss airbase to transport personnel and equipment in Scotland and Northern Ireland during the early stages of the Covid-19 pandemic.

Stanton delivers A MEMORIAL to 135 airmen and women who served at a wartime airbase that played a key role in the raid on the German battleship Scharnhorst has been unveiled in west Oxfordshire. The large bronze plaque is a tribute to those who served at RAF Stanton Harcourt, built in only four months in 1940, despite a fatal Luftwaffe attack part-way through. Measuring nearly two metres high, the plaque will be permanently mounted to a former Water Tower, located at Hayfield Green – the residential redevelopment of the West Oxfordshire airfield. Brize Norton Station Commander Gp Capt Emily Flynn, pictured left, said: “Stanton Harcourt opened to flying in September 1940 when a fleet of Whitley aircraft arrived and in the four years that followed this site played a vital role in supporting the efforts of nearby RAF Abingdon. “The men and women who served at RAF Stanton Harcourt

Homage to airmen and women of WWII station

LOCAL HEROES: From left, WO Brian Kayll, Gp Capt Emily Flynn, Cllr Matthew Judson and Andy Morris at the memorial on the site of RAF Stanton Harcourt in Oxfordshire

will never be forgotten and we are all indebted to their heroic contribution to World War II.” The former air base was also the departure point for Winston Churchill to attend the historic Casablanca Conference in January 1943.

Honi centre’s on the money

HONINGTON’S CHILDREN’S Centre has been revamped thanks to a £45,000 grant. The funding from the RAF Benevolent Fund paid to resurface play areas, provide new play equipment and give parents a sheltered area for buggies. Station Commander Gp Capt Dutch Holland said: “I am delighted to be back where both my own children started their education to formally reopen the Children’s Centre, thanks to the Benevolent Fund.” Welfare Programmes manager Irene Greenwood said: “As a busy station, we know that there are acute pressures on serving parents, and additional knock-on pressures on children and young people. I’m confident we have made a marked improvement to those based at Honington for many years to come.” The station’s April Fool’s Club also contributed towards the project through its own fundraising.