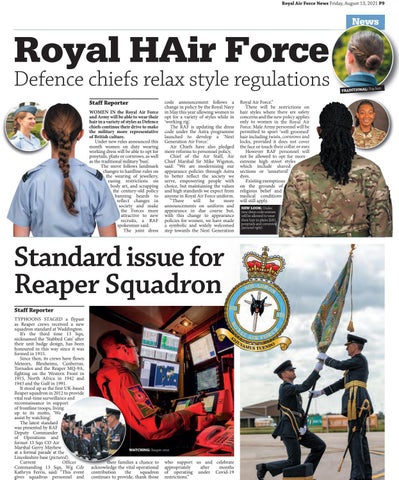 Defence chiefs relax style regulations Staff Reporter WOMEN IN the Royal Air Force and Army will be able to wear their hair in a variety of styles as Defence chiefs continue their drive to make the military more representative of British culture. Under new rules announced this month women on duty wearing working dress will be able to opt for ponytails, plaits or cornrows, as well as the traditional military ‘bun’. The move follows landmark changes to hardline rules on the wearing of jewellery, easing restrictions on body art, and scrapping the century-old policy banning beards to reflect changes in society and make the Forces more attractive to new recruits, a RAF spokesman said. The joint dress

code announcement follows a change in policy by the Royal Navy in May this year allowing women to opt for a variety of styles while in ‘working rig’. The RAF is updating the dress code under the Astra programme launched to develop a ‘Next Generation Air Force.’ Air Chiefs have also pledged more reforms to personnel policy. Chief of the Air Staff, Air Chief Marshal Sir Mike Wigston, said: “We are modernising our appearance policies through Astra to better reflect the society we serve, empowering people with choice, but maintaining the values and high standards we expect from anyone in Royal Air Force uniform. “There will be more announcements on uniform and appearance in due course but, with this change to appearance policies for women, we have made a symbolic and widely welcomed step towards the Next Generation

Standard issue for Reaper Squadron Staff Reporter TYPHOONS STAGED a flypast as Reaper crews received a new squadron standard at Waddington. It’s the third time 13 Sqn, nicknamed the ‘Stabbed Cats’ after their unit badge design, has been honoured in this way since it was formed in 1915. Since then, its crews have flown Meteors, Blenheims, Canberras, Tornados and the Reaper MQ-9A, fighting on the Western Front in 1915, North Africa in 1942 and 1943 and the Gulf in 1991. It stood up as the first UK-based Reaper squadron in 2012 to provide vital real-time surveillance and reconnaissance in support of frontline troops, living up to its motto, ‘We assist by watching’. The latest standard was presented by RAF Deputy Commander of Operations and former 13 Sqn CO Air Marshal Gerry Mayhew at a formal parade at the pictured). Lincolnshire base (pictured). Current Officer Commanding 13 Sqn, Wg Cdr Kathryn Ferris, said: “This event gives squadron personnel and

their families a chance to acknowledge the vital operational contribution the squadron continues to provide, thank those

who support us and celebrate appropriately after months of operating under Covid-19 restrictions.”

Royal Air Force.” There will be restrictions on hair styles where there are safety concerns and the new policy applies only to women in the Royal Air Force. Male Army personnel will be permitted to sport ‘well groomed’ hair including twists, cornrows and locks, provided it does not cover the face or touch their collar or ears However RAF personnel will not be allowed to opt for more extreme high street styles which include shaved sections or ‘unnatural’ dyes. Existing exemptions on the grounds of religious belief and medical conditions will still apply. NEW LOOK: Under new dress code women will be allowed to wear their hair in plaits (left), left), ponytails and cornrows (pictured right)