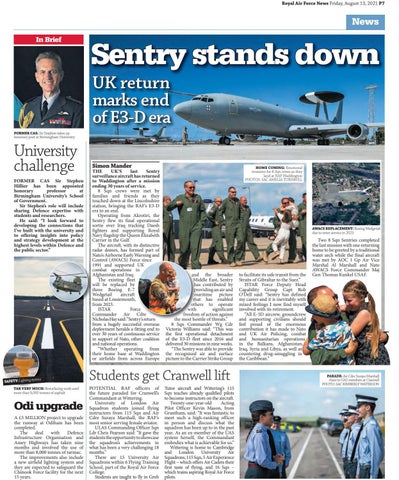 University challenge FORMER CAS Sir Stephen Hillier has been appointed honorary professor at Birmingham University’s School of Government. Sir Stephen’s role will include sharing Defence expertise with students and researchers. He said: “I look forward to developing the connections that I’ve built with the university and to offering insights into policy and strategy development at the highest levels within Defence and the public sector.”

Odi upgrade A £5 MILLION project to upgrade the runway at Odiham has been completed. The deal with Defence Infrastructure Organisation and Amey Highways has taken nine months and involved the use of more than 8,000 tonnes of tarmac. The improvements also include a new airfield lighting system and they are expected to safeguard the Chinook Force facility for the next 15 years.

THE UK’S last Sentry surveillance aircraft has returned to Waddington after a mission ending 30 years of service. 8 Sqn crews were met by families and friends as they touched down at the Lincolnshire station, bringing the RAF’s E3-D era to an end. Operating from Akrotiri, the Sentry flew its final operational sortie over Iraq tracking Daesh fighters and supporting Royal Navy flagship the Queen Elizabeth Carrier in the Gulf. The aircraft, with its distinctive radar domes, has formed part of Nato’s Airborne Early Warning and Control (AWACS) Force since 1991 and supported UK combat operations in Afghanistan and Iraq. The existing fleet will be replaced by three Boeing E-7 Wedgetail aircraft based at Lossiemouth, from 2023. ISTAR Force Commander Air Cdre Nicholas Hay said: “Sentry’s return from a hugely successful overseas deployment heralds a fitting end to over 30 years of continuous service in support of Nato, other coalition and national operations. “Whether operating from their home base at Waddington or airfields from across Europe

AWACS REPLACEMENT: Boeing Wedgetail due to enter service in 2023

and the broader Middle East, Sentry has contributed by providing an air and maritime picture that has enabled others to operate with significant freedom of action against the most hostile of threats.” 8 Sqn Commander Wg Cdr Victoria Williams said: “This was the first operational detachment of the E3-D fleet since 2016 and delivered 30 missions in nine weeks. “The Sentry was able to provide the recognised air and surface picture to the Carrier Strike Group

Students get Cranwell lift POTENTIAL RAF officers of the future paraded for Cranwell’s Commandant at Wittering. University of London Air Squadron students joined flying instructors from 115 Sqn and Air Cdre Suraya Marshall, the RAF’s most senior serving female aviator. ULAS Commanding Officer Sqn Ldr Chris Pearson said: “It gave the students the opportunity to showcase the squadron’s achievements in what has been a very challenging 18 months.” There are 15 University Air Squadrons within 6 Flying Training School, part of the Royal Air Force College. Students are taught to fly in Grob

Tutor aircraft and Wittering’s 115 Sqn teaches already qualified pilots to become instructors on the aircraft. Twenty-one-year-old Acting Pilot Officer Kevin Mason, from Grantham, said: “It was fantastic to meet such a high-ranking officer in person and discuss what the squadron has been up to in the past year. As an ex-member of the UAS system herself, the Commandant embodies what is achievable for us.” Wittering is home to Cambridge and London University Air Squadrons, 115 Sqn, 5 Air Experience Flight – which offers Air Cadets their first taste of flying, and 16 Sqn – which trains aspiring Royal Air Force pilots.

to facilitate its safe transit from the Straits of Gibraltar to the Suez.” ISTAR Force Deputy Head Capability Group Capt Rob O’Dell said: “Sentry has defined my career and it is inevitably with mixed feelings I now find myself involved with its retirement. “All E-3D aircrew, groundcrew and supporting civilians should feel proud of the enormous contribution it has made to Nato and UK Air Policing, combat and humanitarian operations in the Balkans, Afghanistan, Iraq, Syria and Libya, as well as countering drug-smuggling in the Caribbean.”