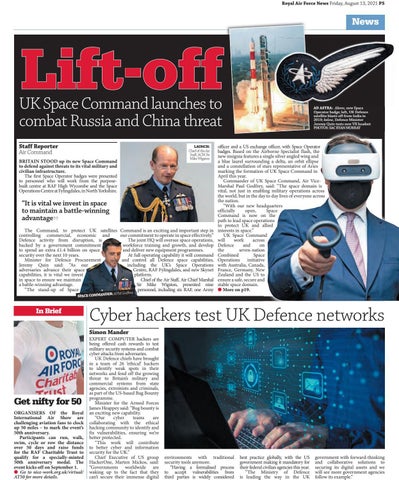 UK Space Command launches to combat Russia and China threat Staff Reporter Air Command BRITAIN STOOD up its new Space Command to defend against threats to its vital military and civilian infrastructure. The first Space Operator badges were presented to personnel who will work from the purposebuilt centre at RAF High Wycombe and the Space Operations Centre at Fylingdales, in North Yorkshire.

The Command, to protect UK satellites Command is an exciting and important step in controlling commercial, economic and our commitment to operate in space effectively.” Defence activity from disruption, is The joint HQ will oversee space operations, backed by a government commitment workforce training and growth, and develop to spend an extra £1.4 billion on space and deliver new equipment programmes. security over the next 10 years. At full operating capability it will command Minister for Defence Procurement and control all Defence space capabilities, Jeremy Quin said: “As our including the UK’s Space Operations adversaries advance their space Centre, RAF Fylingdales, and new Skynet capabilities, it is vital we invest platform. in space to ensure we maintain Chief of the Air Staff, Air Chief Marshal a battle-winning advantage. Sir Mike Wigston, presented nine “The stand-up of Space personnel, including six RAF, one Army R: AVM Godfrey SPACE COMMANDE

officer and a US exchange officer, with Space Operator badges. Based on the Airborne Specialist flash, the new insignia features a single silver angled wing and a blue laurel surrounding a delta, an orbit ellipse and a constellation of stars representative of Aries marking the formation of UK Space Command in April this year. Commander of UK Space Command, Air ViceMarshal Paul Godfrey, said: “The space domain is vital, not just in enabling military operations across the world, but in the day to day lives of everyone across the nation. “With our new headquarters officially open, Space Command is now on the path to lead space operations to protect UK and allied interests in space.” UK Space Command will work across Defence and on the seven-nation Combined Space Operations initiative with Australia, Canada, France, Germany, New Zealand and the US to ensure a safe, secure and stable space domain. More on p19.

Get nifty for 50 ORGANISERS OF the Royal International Air Show are challenging aviation fans to clock up 50 miles – to mark the event’s 50th anniversary. Participants can run, walk, swim, cycle or row the distance over 50 days and raise funds for the RAF Charitable Trust to qualify for a specially-minted 50th anniversary medal. The event kicks off on September 1. Go to nice-work.org.uk/virtual/ AT50 for more details.

EXPERT COMPUTER hackers are being offered cash rewards to test military security systems and combat cyber attacks from adversaries. UK Defence chiefs have brought in a team of 26 ‘ethical’ hackers to identify weak spots in their networks and fend off the growing threat to Britain’s military and commercial systems from state agencies, extremists and criminals, as part of the US-based Bug Bounty programme. Minister for the Armed Forces James Heappey said: “Bug bounty is an exciting new capability. “Our cyber teams are collaborating with the ethical hacking community to identify and fix vulnerabilities, ensuring we’re better protected. “This work will contribute to better cyber and information security for the UK.” Chief Executive of US group HackerOne, Marten Mickos, said: “Governments worldwide are waking up to the fact that they can’t secure their immense digital

environments with traditional security tools anymore. “Having a formalised process to accept vulnerabilities from third parties is widely considered

best practice globally, with the US government making it mandatory for their federal civilian agencies this year. “The Ministry of Defence is leading the way in the UK

government with forward-thinking and collaborative solutions to securing its digital assets and we will see more government agencies follow its example.”