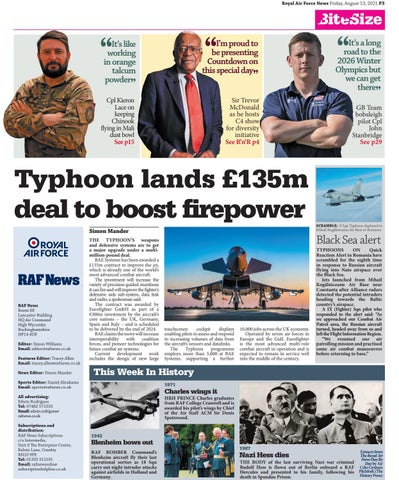 I’m proud to be presenting Countdown on this special day”

THE TYPHOON’S weapons and defensive systems are to get a major upgrade under a multimillion-pound deal. BAE Systems has been awarded a £135m contract to improve the jet, which is already one of the world’s most advanced combat aircraft. The investment will increase the variety of precision-guided munitions it can fire and will improve the fighter’s defensive aids sub-system, data link and radio, a spokesman said. The contract was awarded by Eurofighter GmbH as part of a €300m investment by the aircraft’s core nations – the UK, Germany, Spain and Italy – and is scheduled to be delivered by the end of 2024. BAE claims the move will increase interoperability with coalition forces, and pioneer technologies for future combat air systems. Current development work includes the design of new large

touchscreen cockpit displays enabling pilots to assess and respond to increasing volumes of data from the aircraft’s sensors and datalinks. The Typhoon programme employs more than 5,000 at BAE Systems, supporting a further

10,000 jobs across the UK economy. Operated by seven air forces in Europe and the Gulf, Eurofighter is the most advanced multi-role combat aircraft in operation and is expected to remain in service well into the middle of the century.

TYPHOONS ON Quick Reaction Alert in Romania have scrambled for the eighth time in response to Russian aircraft flying into Nato airspace over the Black Sea. Jets launched from Mihail Kogălniceanu Air Base near Constanta after Alliance radars detected the potential intruders heading towards the Baltic country’s airspace. A IX (Fighter) Sqn pilot who responded to the alert said: “As we approached our Combat Air Patrol area, the Russian aircraft turned, headed away from us and left the Flight Information Region. “We resumed our air patrolling mission and practised some air combat manoeuvres before returning to base.”

THE BODY of the last surviving Nazi war criminal Rudolf Hess is flown out of Berlin onboard a RAF Hercules and presented to his family, following his death in Spandau Prison.