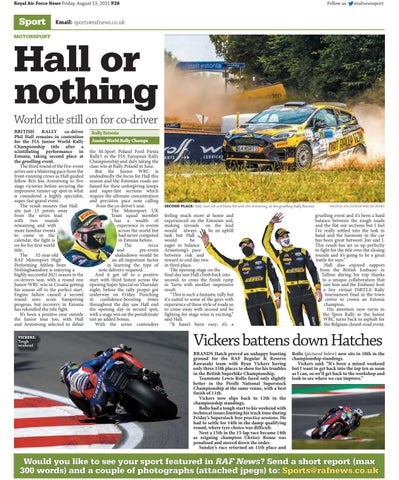 Hall or nothing World title still on for co-driver BRITISH RALLY co-driver Phil Hall remains in contention for the FIA Junior World Rally Championship title after a scintillating performance in Estonia, taking second place at the gruelling event. The third round of the five-event series saw a blistering pace from the front-running crews as Hall guided fellow Brit Jon Armstrong to five stage victories before securing the impressive runner-up spot in what is considered a highly specialist, super-fast gravel event. The result ensures that Hall sits just 15 points away from the series lead with two rounds remaining and with more familiar events to come in the calendar, the fight is on for his first world title. The 32-year-old RAF Motorsport High Performing Athlete from Nottinghamshire is enjoying a highly successful 2021 season in the co-drivers seat, with a round one Junior WRC win in Croatia getting his season off to the perfect start. Engine failure caused a second round zero score hampering progress, but recovery in Estonia has rekindled the title fight. It’s been a positive year outside the Junior tour too, with Hall and Armstrong selected to debut VICKERS: Tough weekend

Rally Estonia Junior World Rally Champs the M-Sport Poland Ford Fiesta Rally3 in the FIA European Rally Championship and duly taking the class win at Rally Poland in June. But the Junior WRC is undoubtedly the focus for Hall this season and the Estonian roads are famed for their unforgiving jumps and super-fast sections which require the ultimate concentration and precision pace note calling from the co-driver’s seat. The Motorsport UK Team squad member has a wealth of experience in events across the world but had never competed in Estonia before. The recce and pre-event shakedown would be an all-important factor in learning the type of note delivery required. And it got off to a positive start with third fastest across the opening Super Special on Thursday night, before the rally proper got underway on Friday. Punching in confidence-boosting times throughout the day saw Hall end the opening day in second spot, with a stage win on the penultimate test an added bonus. With the series contenders

SECOND PLACE: Hall, inset left and below left with Jon Armstrong, at the gruelling Rally Estonia

feeling much more at home and experienced on the Estonian soil, making inroads on the lead would always be an uphill task but Hall would be eager to balance Armstrong’s pace between risk and reward to end day two in third place. The opening stage on the final day saw Hall climb back into second, to cross the finish ramp in Tartu with another impressive result. “This is such a fantastic rally but it's suited to some of the guys with experience of these style of roads so to come away with second and be fighting for stage wins is exciting,” said Hall. “It hasn’t been easy; it’s a

gruelling event and it’s been a hard balance between the rough roads and the flat out sections but I feel I’ve really settled into the task in hand and the harmony in the car has been great between Jon and I. This result has set us up perfectly to fight for the title over the closing rounds and it’s going to be a great battle for sure.” Hall also enjoyed support from the British Embassy in Tallinn during his trip thanks to a unique collaboration that saw him and the Embassy host a live virtual DiRT2.0 Rally tournament final in the town centre to crown an Estonia champion. His attention now turns to the Ypres Rally as the Junior WRC turns back to asphalt for the Belgium closed-road event.

Vickers battens down Hatches BRANDS Hatch proved an unhappy hunting ground for the RAF Regular & Reserve Kawasaki team with Ryan Vickers having only three 15th places to show for his troubles in the British Superbike Championship. Teammate Lewis Rollo fared only slightly better in the Pirelli National Superstock Championship at the same venue, with a best finish of 11th. Vickers now slips back to 12th in the championship standings. Rollo had a tough start to his weekend with technical issues limiting his track time during Friday’s Superstock free practice sessions. He had to settle for 14th in the damp qualifying round, where tyre choice was difficult. Next a 15th in the 15-lap race became 14th as reigning champion Chrissy Rouse was penalised and moved down the order. Sunday’s race returned an 11th place and

Rollo (pictured below) now sits in 10th in the championship standings. Vickers said: “It's been a mixed weekend but I want to get back into the top ten as soon as I can, so we’ll get back to the workshop and look to see where we can improve.”