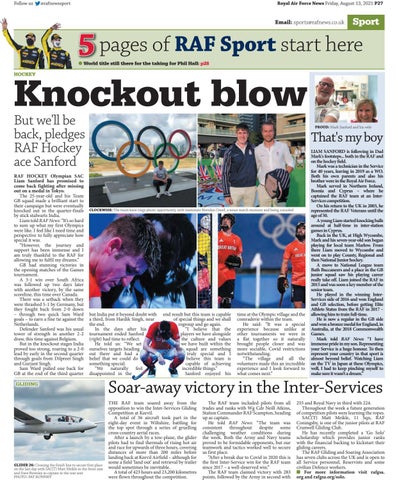 But we'll be back, pledges RAF Hockey ace Sanford

RAF HOCKEY Olympian SAC Liam Sanford has promised to come back fighting after missing out on a medal in Tokyo. The 25-year-old and his Team GB squad made a brilliant start to their campaign but were eventually knocked out in the quarter-finals by stick stalwarts India. Liam told RAF News: “It’s so hard to sum up what my first Olympics were like. I feel like I need time and perspective to fully appreciate how special it was. “However, the journey and support has been immense and I am truly thankful to the RAF for allowing me to fulfil my dreams.” GB had stunning victories in the opening matches of the Games tournament. A 3-1 win over South Africa was followed up two days later with another victory, by the same scoreline, this time over Canada. There was a setback when they were thrashed 5-1 by Germany, but they fought back from 2-0 down – through two quick Sam Ward goals – to earn a fine tie against the Netherlands. Defender Sanford was his usual tower of strength in another 2-2 draw, this time against Belgium. But in the knockout stages India proved too strong, roaring to a 2-0 lead by early in the second quarter through goals from Dilpreet Singh and Gurjant Singh. Sam Ward pulled one back for GB at the end of the third quarter

PROUD: Mark Sanford and his wife

but India put it beyond doubt with a third, from Hardik Singh, near the end. In the days after his tournament ended Sanford (right) had time to reflect. He told us: “We set ourselves targets heading out there and had a belief that we could do something special. “We naturally feel disappointed in the

GLIDER 26: Crossing the finish line to secure first place on the last day with SAC(T) Matt Meikle in the front seat and Dave Bromley as captain in the rear seat PHOTO: PAT ROWNEY

time at the Olympic village and the comraderie within the team. He said: “It was a special experience because unlike at other tournaments we were in a flat together so it naturally brought people closer and was more sociable, Covid restrictions notwithstanding. “The village and all the volunteers made this an incredible experience and I look forward to what comes next.”

LIAM SANFORD is following in Dad Mark's footsteps... both in the RAF and on the hockey field. Mark was a technician in the Service for 40 years, leaving in 2019 as a WO. Both his own parents and also his brother were in the Royal Air Force. Mark served in Northern Ireland, Bosnia and Cyprus – where he captained the RAF team at an InterServices competition. On his return to the UK in 2003, he represented the RAF Veterans until the age of 50. A young Liam started knocking balls around at half-time in inter-station games in Cyprus. Back in the UK, at High Wycombe, Mark and his seven-year-old son began playing for local team Marlow. From there Liam moved to Wycombe and went on to play County, Regional and then National Junior hockey. A move to National League team Bath Buccaneers and a place in the GB junior squad saw his playing career really take off. Liam joined the RAF in 2015 and was soon a key member of the senior team. He played in the winning InterServices side of 2016 and won England and GB selection, before getting Elite Athlete Status from the RAF in 2017 – allowing him to train full-time. He is now a regular in the GB side and won a bronze medal for England, in Australia, at the 2018 Commonwealth Games. Mark told RAF News: “I have immense pride in my son. Representing your Service is a huge honour. To then represent your country in that sport is almost beyond belief. Watching Liam on the TV in Japan at these Olympics, well, I had to keep pinching myself to make sure it wasn’t a dream.”

Soar-away victory in the Inter-Services THE RAF team soared away from the opposition to win the Inter-Services Gliding Competition at Keevil. A total of 36 aircraft took part in the eight-day event in Wiltshire, battling for the top spot through a series of gruelling cross-country aerial races. After a launch by a tow-plane, the glider pilots had to find thermals of rising hot air and race for upwards of three hours, covering distances of more than 200 miles before landing back at Keevil Airfield – although for some a field ‘land out’ and retrieval by trailer would sometimes be inevitable. A total of 423 hours and 23,200 kilometres were flown throughout the competition.

The RAF team included pilots from all trades and ranks with Wg Cdr Neill Atkins, Station Commander RAF Scampton, heading up as captain. He told RAF News: “The team was consistent throughout despite some challenging weather conditions during the week. Both the Army and Navy teams proved to be formidable opponents, but our teamwork and tactics worked well to secure us first place. “After a break due to Covid in 2020 this is the first Inter-Service win for the RAF team since 2017 – a well-deserved win.” The RAF team claimed victory with 283 points, followed by the Army in second with

255 and Royal Navy in third with 224. Throughout the week a future generation of competition pilots were learning the ropes. SAC(T) Matt Meikle, 11 Sqn, RAF Coningsby, is one of the junior pilots at RAF Cranwell Gliding Club. He has recently completed a ‘Go Solo’ scholarship which provides junior ranks with the financial backing to kickstart their gliding careers. The RAF Gliding and Soaring Association has seven clubs across the UK and is open to all Service personnel, Reservists and some civilian Defence workers. ■ For more information visit rafgsa. org and rafgsa.org/solo.