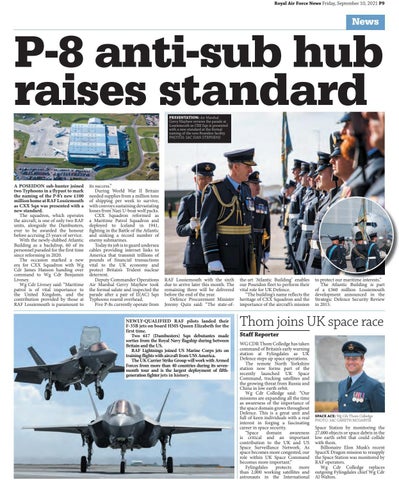 A POSEIDON sub-hunter joined two Typhoons in a flypast to mark the naming of the P-8’s new £100 million home at RAF Lossiemouth as CXX Sqn was presented with a new standard. The squadron, which operates the aircraft, is one of only two RAF units, alongside the Dambusters, ever to be awarded the honour before accruing 25 years of service. With the newly-dubbed Atlantic Building as a backdrop, 60 of its personnel paraded for the first time since reforming in 2020. The occasion marked a new era for CXX Squadron with Wg Cdr James Hanson handing over command to Wg Cdr Benjamin Livesey. Wg Cdr Livesey said: “Maritime patrol is of vital importance to the United Kingdom, and the contribution provided by those at RAF Lossiemouth is paramount to

its success.” During World War II Britain needed supplies from a million tons of shipping per week to survive, with convoys sustaining devastating losses from Nazi U-boat wolf packs. CXX Squadron reformed as a Maritime Patrol Squadron and deployed to Iceland in 1941, fighting in the Battle of the Atlantic and sinking a record number of enemy submarines. Today its job is to guard undersea cables providing internet links to America that transmit trillions of pounds of financial transactions vital to the UK economy and protect Britain’s Trident nuclear deterrent. Deputy Commander Operations Air Marshal Gerry Mayhew took the formal salute and inspected the parade after a pair of II(AC) Sqn Typhoons roared overhead. Five P-8s currently operate from

RAF Lossiemouth with the sixth due to arrive later this month. The remaining three will be delivered before the end of the year. Defence Procurement Minister Jeremy Quin said: “The state-of-

NEWLY-QUALIFIED RAF pilots landed their F-35B jets on board HMS Queen Elizabeth for the first time. Two 617 (Dambusters) Sqn debutantes made sorties from the Royal Navy flagship during between Britain and the US. RAF Lightnings joined US Marine Corps jets on training flights with aircraft from USS America. The UK Carrier Strike Group will work with Armed Forces from more than 40 countries during its sevenmonth tour and is the largest deployment of fifthgeneration fighter jets in history.

the-art ‘Atlantic Building’ enables our Poseidon fleet to perform their vital role for UK Defence. “The building’s name reflects the heritage of CXX Squadron and the importance of the aircraft’s mission

to protect our maritime interests.” The Atlantic Building is part of a £360 million Lossiemouth development announced in the Strategic Defence Security Review in 2015.

Thom joins UK space race Staff Reporter WG CDR Thom Colledge has taken command of Britain’s early warning station at Fylingdales as UK Defence steps up space operations. The remote North Yorkshire station now forms part of the recently launched UK Space Command, tracking satellites and the growing threat from Russia and China in low earth orbit. Wg Cdr Colledge said: “Our missions are expanding all the time as awareness of the importance of the space domain grows throughout Defence. This is a great unit and full of keen individuals with a real interest in forging a fascinating career in space security. “Space domain awareness is critical and an important contribution to the UK and US Space Surveillance Network. As space becomes more congested, our role within UK Space Command becomes more important.” Fylingdales protects more than 2,000 working satellites and astronauts in the International