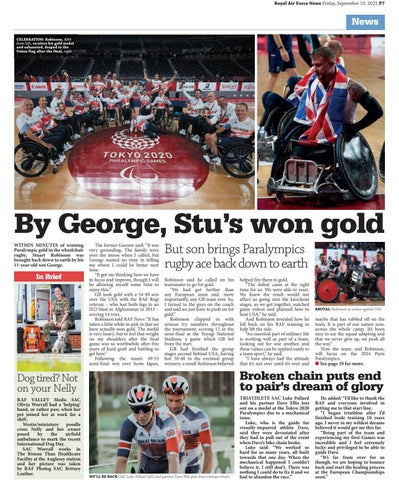 News CELEBRATION: Robinson, fifth from left, receives his gold medal and exhausted, draped in the Union flag after the final, right

By George, Stu’s won gold WITHIN MINUTES of winning Paralympic gold in the wheelchair rugby, Stuart Robinson was brought back down to earth by his 11-year-old son George.

The former Gunner said: “It was very grounding. The family were over the moon when I called, but George wasted no time in telling me where I could be better next time. “It got me thinking how we have to focus and improve, though I will be allowing myself some time to enjoy this.” GB took gold with a 54-49 win over the USA with the RAF Regt veteran – who lost both legs in an IED blast in Afghanistan in 2013 – scoring 14 tries. Robinson told RAF News: “It has taken a little while to sink in that we have actually won gold. The medal is very heavy, but to feel that weight on my shoulders after the final game was so worthwhile after five years of hard graft and battling to get here.” Following the team’s 49-55 semi-final win over hosts Japan,

But son brings Paralympics rugby ace back down to earth Robinson said he called on his teammates to go for gold. “We had got further than any European team and, more importantly, any GB team ever. So, I turned to the guys on the coach and said we just have to push on for gold.” Robinson chipped in with serious try numbers throughout the tournament, scoring 12 in the semi-final at the Yoyogi National Stadium, a game which GB led from the start. GB had finished the group stages second behind USA, having lost 50-48 to the eventual group winners, a result Robinson believed

BRUTAL: Robinson in action against USA

maybe that has rubbed off on the team. It is part of our nature now, across the whole camp. It’s been nice to see the squad adapting and that we never give up, we push all the way.” Now the team, and Robinson, will focus on the 2024 Paris Paralympics. See page 29 for more.

Dog tired? Not on your Nelly RAF VALLEY Medic SAC Olivia Worrall had a ‘helping’ hand, or rather paw, when her pet joined her at work for a shift. Westie/miniature poodle cross Nelly and her owner posed by the airfield ambulance to mark the recent International Dog Day. SAC Worrall works in The Rimon Than Healthcare Facility at the Anglesey station and her picture was taken by RAF Photog SAC Britney Leather.

helped fire them to gold. “The defeat came at the right time for us. We were able to reset. We knew the result would not affect us going into the knockout stages, so we got together, watched game videos and planned how to beat USA,” he said. And Robinson revealed how he fell back on his RAF training to help lift the side. “An essential part of military life is working well as part of a team, looking out for one another, and these values can be applied easily to a team sport,” he said. “I have always had the attitude that it’s not over until it’s over and

TRIATHLETE SAC Luke Pollard and his partner Dave Ellis lost out on a medal at the Tokyo 2020 Paralympics due to a mechanical issue. Luke, who is the guide for visually-impaired athlete Dave, said they were devastated after they had to pull out of the event when Dave’s bike chain broke. Luke said: “We worked so hard for so many years, all built towards that one day. When the mechanical happened I couldn’t believe it, I still don’t. There was nothing I could do to fix it and we had to abandon the race.”

He added: “I’d like to thank the RAF and everyone involved in getting me to that start line. “I began triathlon after I’d finished trade training 10 years ago. I never in my wildest dreams believed it would get me this far. “Being part of the team and experiencing my first Games was incredible and I feel extremely lucky and privileged to be able to guide Dave. “It’s far from over for us though, we are hoping to bounce back and start the healing process at the European Championships soon.”