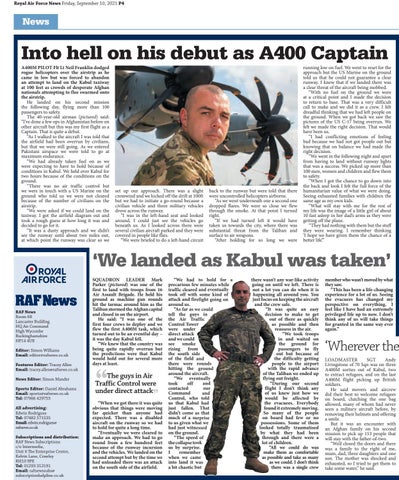 Into hell on his debut as A400 Captain A400M PILOT Flt Lt Neil Franklin dodged rogue helicopters over the airstrip as he came in low but was forced to abandon an attempt to land on the Kabul taxiway at 100 feet as crowds of desperate Afghan nationals attempting to flee swarmed onto the airstrip. He landed on his second mission the following day, flying more than 100 passengers to safety. The 40-year-old airman (pictured) said: “I’ve done a few ops in Afghanistan before on other aircraft but this was my first flight as a Captain. That is quite a debut. “As I walked to the aircraft I was told that the airfield had been overrun by civilians, but that we were still going. As we entered Pakistani airspace we were told to go at maximum endurance. “We had already taken fuel on as we were expecting to have to hold because of conditions in Kabul. We held over Kabul for two hours because of the conditions on the ground. “There was no air traffic control but we were in touch with a US Marine on the ground who told us we were not cleared because of the number of civilians on the airstrip. “We were asked if we could land on the taxiway. I got the airfield diagram out and took a rough guess at how long it was and decided to go for it. “It was a dusty approach and we didn’t see the runway until about two miles out, at which point the runway was clear so we

set up our approach. There was a slight crosswind and we kicked off the drift at 100ft but we had to initiate a go-round because a civilian vehicle and three military vehicles drove across the runway. “I was in the left-hand seat and looked around, I could just see the vehicles go beneath us. As I looked across there were several civilian aircraft parked and they were covered in people like flies. “We were briefed to do a left-hand circuit

back to the runway but were told that there were uncontrolled helicopters airborne. “As we went underneath one a second one dropped flares. We were so close we flew through the smoke. At that point I turned right. “If we had turned left it would have taken us towards the city, where there was substantial threat from the Taliban and surface to air weapons. “After holding for so long we were

running low on fuel. We went to reset for the approach but the US Marine on the ground told us that he could not guarantee a clear runway. I knew that if we landed there was a clear threat of the aircraft being mobbed. “With no fuel on the ground we were at a critical point and I made the decision to return to base. That was a very difficult call to make and we did it as a crew. I felt dreadful thinking that we had left people on the ground. When we got back we saw the pictures of the US C-17 being overrun. We felt we made the right decision. That would have been us. “I had conflicting emotions of feeling bad because we had not got people out but knowing that on balance we had made the right decision. “We went in the following night and apart from having to land without runway lights that was a success. We picked up more than 100 men, women and children and flew them to safety. “When I got the chance to go down into the back and look I felt the full force of the humanitarian value of what we were doing. Seeing exhausted families with children the same age as my own kids. “What will stay with me for the rest of my life was the image of a little girl of about 10 fast asleep in her dad’s arms as they were getting off the plane. “They had nothing with them but the stuff they were wearing. I remember thinking ‘I hope we have given them the chance of a better life’.”

SQUADRON LEADER Mark Parker (pictured) was one of the first to land with troops from 16 Air Assault Brigade. He held his ground as machine gun rounds hit the tarmac around him as the Taliban stormed the Afghan capital and closed in on the airport. He said: “I was one of the first four crews to deploy and we flew the first A400M task, which turned out to be an eventful day – it was the day Kabul fell. “We knew that the country was being quite rapidly overrun but the predictions were that Kabul would hold out for several more days at least.

The guys in Air Traffic Control were under direct attack

“When we got there it was quite obvious that things were moving far quicker than anyone had expected. There was a disabled aircraft on the runway so we had to hold for quite a long time. “Eventually we were cleared to make an approach. We had to go round from a few hundred feet because of the runway incursion and the vehicles. We landed on the second attempt but by the time we had unloaded there was an attack on the south side of the airfield.

“We had to hold for a precarious few minutes while traffic cleared and eventually took off with some kind of attack and firefight going on around us. “As far as we could tell the guys in the Air Traffic Control Tower were under direct attack and we could see smoke rising from the south side of the field and there were rounds hitting the ground around the aircraft. “We eventually took off and contacted our Command and Control, who told us that Kabul had just fallen. That didn’t come as that much of a surprise to us given what we had just witnessed on the ground. “The speed of the collapse took us by surprise. I remember when we came into land it was a bit chaotic but

there wasn’t any war-like activity going on until we left. There is not a lot you can do when it is happening all around you. You just focus on keeping the aircraft and the crew safe. “It was quite an easy decision to make to get out of there as quickly as possible and then reassess in the air. “We took troops in and waited on the ground for passengers to fly out but because of the difficulty getting people to the airport with the rapid advance of the Taliban we ended up flying out freight. “During our second flight I don’t think any of us knew just how we would be affected by the evacuees. Everybody found it extremely moving. So many of the people on board had few or no possessions. Some of them looked totally traumatised by what they had been through and there were a lot of children. “All we could do was make them as comfortable as possible and take as many as we could. I don’t think there was a single crew

member who wasn’t moved by what they saw. “This has been a life-changing experience for a lot of us. Seeing the evacuees has changed my perspective on everything. I feel like I have had an extremely privileged life up to now. I don’t think any of us will take things for granted in the same way ever again.”

‘Wherever the LOADMASTER SGT Andy Livingstone of 70 Sqn was on three A400M sorties out of Kabul, two to extract refugees, and on the last A400M flight picking up British soldiers. He said movers and aircrew did their best to welcome refugees on board, clutching the one bag allowed, many of whom had never seen a military aircraft before, by removing their helmets and offering a smile. But it was an encounter with an Afghan family on his second mission to pick up 153 people that will stay with the father-of-two. “We’d closed the doors and there was a family to the right of me, mum, dad, three daughters and one son. The mother was shocked and exhausted, so I tried to get them to take some water,” he said.