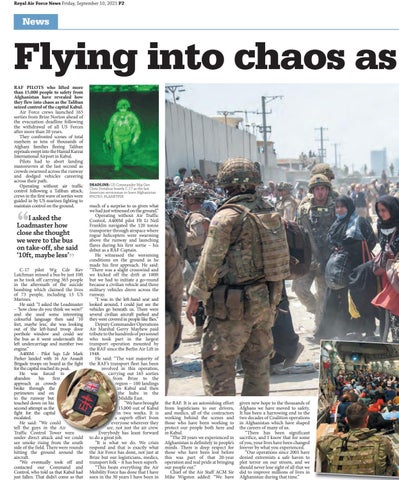 Flying into chaos as RAF PILOTS who lifted more than 15,000 people to safety from Afghanistan have revealed how they flew into chaos as the Taliban seized control of the capital Kabul. Air Force crews launched 165 sorties from Brize Norton ahead of the evacuation deadline following the withdrawal of all US Forces after more than 20 years. They confronted scenes of total mayhem as tens of thousands of Afghani families fleeing Taliban reprisals swept into the Hamid Karzai International Airport in Kabul. Pilots had to abort landing manoeuvres at the last second as crowds swarmed across the runway and dodged vehicles careering across their path. Operating without air traffic control following a Taliban attack, crews in the first wave of sorties were guided in by US marines fighting to maintain control on the ground.

I asked the Loadmaster how close she thought we were to the bus on take-off, she said ‘10ft, maybe less’

C-17 pilot Wg Cdr Kev Latchman missed a bus by just 10ft as he took off carrying 365 people in the aftermath of the suicide bombing which claimed the lives of 73 people, including 13 US Marines. He said: “I asked the Loadmaster – ‘how close do you think we were?’ and she used some interesting colourful language then said ‘10 feet, maybe less,’ she was looking out of the left-hand troop door porthole window and could see the bus as it went underneath the left undercarriage and number two engine.” A400M - Pilot Sqn Ldr Mark Parker landed with 16 Air Assault Brigade troops on board as the fight for the capital reached its peak. He was forced to abandon his first approach as crowds broke through the perimeters and on to the runway but touched down on his second attempt as the fight for the capital escalated. He said: “We could tell the guys in the Air Traffic Control Tower were under direct attack and we could see smoke rising from the south side of the field. There were rounds hitting the ground around the aircraft. “We eventually took off and contacted our Command and Control, who told us that Kabul had just fallen. That didn’t come as that

much of a surprise to us given what we had just witnessed on the ground.” Operating without Air Traffic Control, A400M pilot Flt Lt Neil Franklin navigated the 120 tonne transporter through airspace where rogue helicopters were swarming above the runway and launching flares during his first sortie – his debut as a RAF Captain. He witnessed the worsening conditions on the ground as he made his first approach. He said: “There was a slight crosswind and we kicked off the drift at 100ft but we had to initiate a go-round because a civilian vehicle and three military vehicles drove across the runway. “I was in the left-hand seat and looked around, I could just see the vehicles go beneath us. There were several civilian aircraft parked and they were covered in people like flies.” Deputy Commander Operations Air Marshal Gerry Mayhew paid tribute to the hundreds of personnel who took part in the largest transport operation mounted by the RAF since the Berlin Air Lift in 1948. He said: “The vast majority of the RAF’s transport fleet has been involved in this operation, carrying out 165 sorties from Brize to the region – 100 landings in Kabul and then the hubs in the Middle East. “We have brought 15,000 out of Kabul in two weeks. It is a superb effort from everyone wherever they are, not just the air crew. Everybody has leant forward to do a great job. “It is what we do. We crisis respond and that is exactly what the Air Force has done, not just at Brize but our logisticians, medics, transport folk – it has been superb. “This beats everything the Air Mobility Force has done that I have seen in the 30 years I have been in

the RAF. It is an astonishing effort from logisticians to our drivers, and medics, all of the contractors working behind the scenes and those who have been working to protect our people both here and in Kabul. “The 20 years we experienced in Afghanistan is definitely in people’s minds. There is deep respect for those who have been lost before this was part of that 20-year operation and real pride at bringing our people out.” Chief of the Air Staff ACM Sir Mike Wigston added: “We have

given new hope to the thousands of Afghans we have moved to safety. It has been a harrowing end to the two decades of Coalition operations in Afghanistan which have shaped the careers of many of us. “There has been significant sacrifice, and I know that for some of you, your lives have been changed forever by what you experienced. “Our operations since 2001 have denied extremists a safe haven to plot terror on our streets, and we should never lose sight of all that we did to improve millions of lives in Afghanistan during that time.”