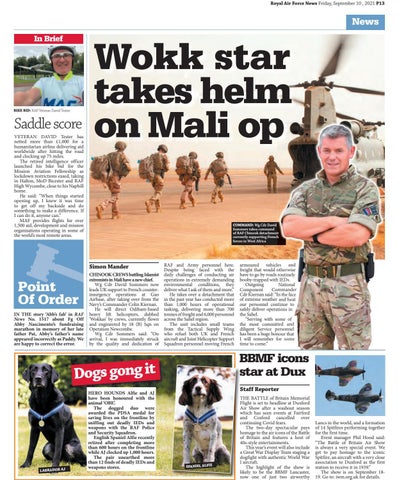 VETERAN DAVID Tester has netted more than £1,000 for a humanitarian airline delivering aid worldwide after hitting the road and clocking up 75 miles. The retired intelligence officer launched his bike bid for the Mission Aviation Fellowship as lockdown restrictions eased, taking in Halton, MoD Bicester and RAF High Wycombe, close to his Naphill home. He said: “When things started opening up, I knew it was time to get off my backside and do something to make a difference. If I can do it, anyone can.” MAF provides flights for over 1,500 aid, development and mission organisations operating in some of the world’s most remote areas.

Point Of Order IN THE story ‘Abb’s fab’ in RAF News No. 1517 about Fg Off Abby Nascimento’s fundraising marathon in memory of her late father Pat, Abby’s father’s name appeared incorrectly as Paddy. We are happy to correct the error.

CHINOOK CREWS battling Islamist extremists in Mali have a new chief. Wg Cdr David Sommers now leads UK support to French counterinsurgency operations at Gao Airbase, after taking over from the Navy’s Commander Colin Kiernan. He will direct Odiham-based heavy lift helicopters, dubbed ‘Wokkas’ by crews, currently flown and engineered by 18 (B) Sqn on Operation Newcombe. Wg Cdr Sommers said: “On arrival, I was immediately struck by the quality and dedication of

RAF and Army personnel here. Despite being faced with the daily challenges of conducting air operations in extremely demanding environmental conditions, they deliver what I ask of them and more.” He takes over a detachment that in the past year has conducted more than 1,000 hours of operational tasking, delivering more than 700 tonnes of freight and 6,000 personnel across the Sahel region. The unit includes small teams from the Tactical Supply Wing who refuel both UK and French aircraft and Joint Helicopter Support Squadron personnel moving French

HERO HOUNDS Alfie and AJ have been honoured with the animal ‘OBE’. The dogged duo were awarded the PDSA medal for saving lives on the frontline by sniffing out deadly IEDs and weapons with the RAF Police and Security Squadron. English Spaniel Alfie recently retired after completing more than 600 hours on the frontline while AJ clocked up 1,000 hours. The pair unearthed more than 12 finds of deadly IEDs and weapons stores.

armoured vehicles and freight that would otherwise have to go by roads routinely booby-trapped with IEDs. Outgoing National Component Commander Cdr Kiernan said: “In the face of extreme weather and heat our personnel continue to safely deliver operations in the Sahel. “Serving with some of the most committed and diligent Service personnel has been a huge honour that I will remember for some time to come.”

THE BATTLE of Britain Memorial Flight is set to headline at Duxford Air Show after a washout season which has seen events at Fairford and Cosford cancelled over continuing Covid fears. The two-day spectacular pays homage to the air icons of the Battle of Britain and features a host of 40s-style entertainments. This year’s event will also include a Great War Display Team staging a dogfight with authentic World War I aircraft. The highlight of the show is likely to be the BBMF Lancaster, now one of just two airworthy

Lancs in the world, and a formation of 14 Spitfires performing together for the first time. Event manager Phil Hood said: “The Battle of Britain Air Show is always a very special event. We get to pay homage to the iconic Spitfire, an aircraft with a very close association to Duxford as the first station to receive it in 1939.” The show is on September 1819. Go to: iwm.org.uk for details.