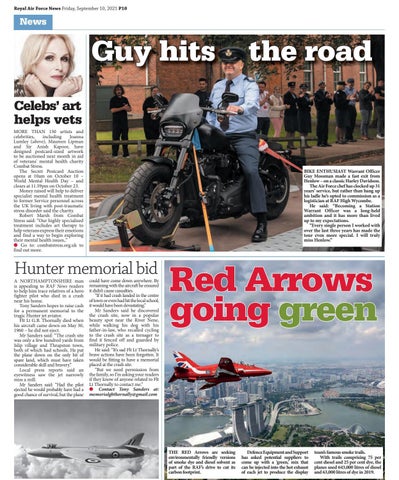 Celebs’ art helps vets MORE THAN 150 artists and celebrities, including Joanna Lumley (above), Maureen Lipman and Sir Anish Kapoor, have designed postcard-sized artwork to be auctioned next month in aid of veterans’ mental health charity Combat Stress. The Secret Postcard Auction opens at 10am on October 10 – World Mental Health Day – and closes at 11.59pm on October 23. Money raised will help to deliver specialist mental health treatment to former Service personnel across the UK living with post-traumatic stress disorder said the charity. Robert Marsh from Combat Stress said: “Our highly specialised treatment includes art therapy to help veterans express their emotions and find a way to begin exploring their mental health issues,.” Go to: combatstress.org.uk to find out more.

BIKE ENTHUSIAST Warrant Officer Guy Mossman made a fast exit from Henlow – on a classic Harley Davidson. The Air Force chef has clocked up 31 years’ service, but rather than hang up his ladle he’s opted to commission as a logistician at RAF High Wycombe. He said: “Becoming a Station Warrant Officer was a long-held ambition and it has more than lived up to my expectations. “Every single person I worked with over the last three years has made the tour even more special. I will truly miss Henlow.”

A NORTHAMPTONSHIRE man is appealing to RAF News readers to help him trace relatives of a hero fighter pilot who died in a crash near his home. Tony Sanders hopes to raise cash for a permanent memorial to the tragic Hunter jet aviator. Flt Lt G.B. Thornally died when his aircraft came down on May 30, 1960 – he did not eject. Mr Sanders said: “The crash site was only a few hundred yards from Islip village and Thrapston town, both of which had schools. He put the plane down on the only bit of spare land, which must have taken considerable skill and bravery.” Local press reports said an eyewitness saw the jet narrowly miss a mill. Mr Sanders said: “Had the pilot ejected he would probably have had a good chance of survival, but the plane

could have come down anywhere. By remaining with the aircraft he ensured it didn’t cause casualties. “If it had crash landed in the centre of town or even had hit the local school, it would have been devastating.” Mr Sanders said he discovered the crash site, now in a popular beauty spot near the River Nene, while walking his dog with his father-in-law, who recalled cycling to the crash site as a teenager to find it fenced off and guarded by military police. He said: “It’s sad Flt Lt Thornally’s brave actions have been forgotten. It would be fitting to have a memorial placed at the crash site. “But we need permission from the family, so I’m asking your readers if they know of anyone related to Flt Lt Thornally to contact me.” Contact Tony Sanders at: memorialgbthornally@gmail.com

THE RED Arrows are seeking environmentally friendly versions of smoke dye and diesel solvent as part of the RAF’s drive to cut its carbon footprint.

Defence Equipment and Support has asked potential suppliers to come up with a ‘green,’ mix that can be injected into the hot exhaust of each jet to produce the display