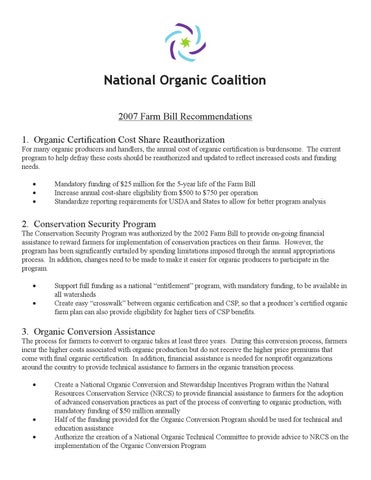 For many organic producers and handlers, the annual cost of organic certiﬁcation is burdensome. The current program to help defray these costs should be reauthorized and updated to reﬂect increased costs and funding needs. • • •

The Conservation Security Program was authorized by the 2002 Farm Bill to provide on-going ﬁnancial assistance to reward farmers for implementation of conservation practices on their farms. However, the program has been signiﬁcantly curtailed by spending limitations imposed through the annual appropriations process. In addition, changes need to be made to make it easier for organic producers to participate in the program. • •

Support full funding as a national “entitlement” program, with mandatory funding, to be available in all watersheds Create easy “crosswalk” between organic certiﬁcation and CSP, so that a producer’s certiﬁed organic farm plan can also provide eligibility for higher tiers of CSP beneﬁts.

The process for farmers to convert to organic takes at least three years. During this conversion process, farmers incur the higher costs associated with organic production but do not receive the higher price premiums that come with ﬁnal organic certiﬁcation. In addition, ﬁnancial assistance is needed for nonproﬁt organizations around the country to provide technical assistance to farmers in the organic transition process. •

Create a National Organic Conversion and Stewardship Incentives Program within the Natural Resources Conservation Service (NRCS) to provide ﬁnancial assistance to farmers for the adoption of advanced conservation practices as part of the process of converting to organic production, with mandatory funding of $50 million annually Half of the funding provided for the Organic Conversion Program should be used for technical and education assistance Authorize the creation of a National Organic Technical Committee to provide advice to NRCS on the implementation of the Organic Conversion Program

4. Seeds and Breeds for the 21st Century

Amend the National Research Initiative (NRI) to list “classical plant and animal breeding” as one of the priorities for competitive research grants, and modify term limitations for NRI research grants to reﬂect longer-term nature of breeding programs. Reauthorize the ARS National Genetic Resource Program and increase support for the collection, preservation and evaluation of germplasm collections. Direct ARS to accelerate long-term research in this arena. Enact a successor to the Initiative for Future Agriculture and Food Systems, and include classical plant and animal breeding as a priority.

For years, organic farming has been a bright spot of opportunity for family farmers seeking a fair price for their products. However, as organic food processing ﬁrms and retail chains consolidate and dominate markets, farmers’ leverage to negotiate fair prices and fair contract terms is in jeopardy. The Agricultural Fair Practices Act was enacted in 1967 to prohibit processors and handlers from retaliating against producers who join producer cooperatives or associations in an effort to gain more market power. Yet loopholes in the law have made it difﬁcult for USDA to enforce the statute, and changes are needed to make to make it a more effective bargaining statute: •

Amend the Agricultural Fair Practices Act to close loopholes which have made it difﬁcult to enforce, and add provisions to require processors to bargain in good faith with associations of producers, including organic producer associations, instead of leaving producers to negotiate price and contract terms unilaterally with large corporate buyers.

USDA research programs have not kept pace with the growth of organic agriculture in the marketplace. Although organic currently represents about 3 percent of total U.S. food retail market, the share of USDA research targeted to organic agriculture and marketing only represents about 0.6 percent annually ($12 million). In order to adequately meet the public research and data needs of the rapidly growing organic sector, the 2007 Farm Bill should reauthorize valuable organic research programs at higher funding levels, and make sure that existing USDA research and data collection efforts are expanded to include organic-speciﬁc activities •

Combine existing CSREES organic research programs into one Integrated Organic Program (IOP), with combined mandatory funding of $15 million annually. This would include the existing Organic Farming Research and Extension Initiative, which was authorized through the 2002 Farm Bill with $3 million in annual mandatory funding, and Organic Transition Program, which has received about $1.9 million in annual discretionary funding. A permanent National Program Leader for Organic Agriculture should be created at the Agriculture Research Service (ARS), with at least $25 million annually to be dedicated to organic-speciﬁc research, to be increased commensurate with the relative growth in the organic sector. Also, the National Agriculture Library should strengthen its efforts to disseminate organic research results. The 2002 Farm Bill included the Organic Production and Marketing Data Initiative to require

USDA data collection agencies to collect and publish segregated organic data. While some efforts are underway within ERS, AMS and NASS to collect and publish such data, these efforts must be expanded to meet the needs of organic producers, processors and consumers. Amend the National Research Initiative to require competitive grants to be used to foster classical plant and animal breeding (see “Seeds and Breeds” section above).

USDA’s organic regulations only prohibit the intentional use of any genetically engineered technology in growing, handling or processing an organic crop or product. However, shipments of organic products may be rejected should any genetically engineered material be detected. This has resulted in ﬁnancial losses because of “contaminated” product, with farmers and processors increasingly bearing the cost of expensive testing and detection. • 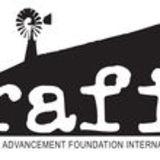 The National Organic Coalition's eight-point platform for the 2007 Farm Bill.

The National Organic Coalition's eight-point platform for the 2007 Farm Bill.