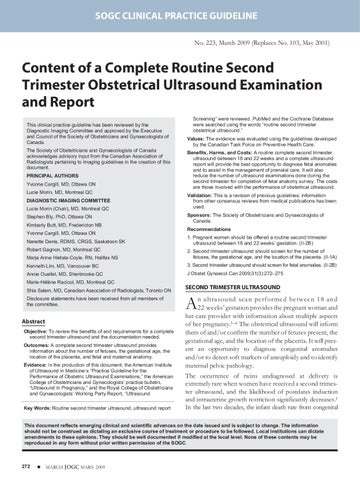 Screening” were reviewed. PubMed and the Cochrane Database were searched using the words “routine second trimester obstetrical ultrasound.” Values: The evidence was evaluated using the guidelines developed by the Canadian Task Force on Preventive Health Care. Benefits, Harms, and Costs: A routine complete second trimester ultrasound between 18 and 22 weeks and a complete ultrasound report will provide the best opportunity to diagnose fetal anomalies and to assist in the management of prenatal care. It will also reduce the number of ultrasound examinations done during the second trimester for completion of fetal anatomy survey. The costs are those involved with the performance of obstetrical ultrasound. Validation: This is a revision of previous guidelines; information from other consensus reviews from medical publications has been used. Sponsors: The Society of Obstetricians and Gynaecologists of Canada. Recommendations 1. Pregnant women should be offered a routine second trimester ultrasound between 18 and 22 weeks’ gestation. (II-2B)

2. Second trimester ultrasound should screen for the number of fetuses, the gestational age, and the location of the placenta. (II-1A)

Marie-Hélène Racicot, MD, Montreal QC Shia Salem, MD, Canadian Association of Radiologists, Toronto ON Disclosure statements have been received from all members of the committee.

n ultrasound scan performed between 18 and 22 weeks’ gestation provides the pregnant woman and her care provider with information about multiple aspects of her pregnancy.1–4 The obstetrical ultrasound will inform them of and/or confirm the number of fetuses present, the gestational age, and the location of the placenta. It will present an opportunity to diagnose congenital anomalies and/or to detect soft markers of aneuploidy and to identify maternal pelvic pathology.

The occurrence of twins undiagnosed at delivery is extremely rare when women have received a second trimester ultrasound, and the likelihood of postdates induction and intrauterine growth restriction significantly decreases.1 In the last two decades, the infant death rate from congenital

This document reflects emerging clinical and scientific advances on the date issued and is subject to change. The information should not be construed as dictating an exclusive course of treatment or procedure to be followed. Local institutions can dictate amendments to these opinions. They should be well documented if modified at the local level. None of these contents may be reproduced in any form without prior written permission of the SOGC.

Number of fetuses and indications of life Biometry

• Name of interpreting physician Presence of cardiac activity for each fetus If multiple gestation: chorionicity and amnionicity should be reported Should be reported all in millimetres or in centimetres along with equivalent estimated gestational age for:

Table 2. Key to evidence statements and grading of recommendations, using the ranking of the Canadian Task Force on Preventive Health Care Quality of Evidence Assessment*

A. There is good evidence to recommend the clinical preventive action

Evidence obtained from at least one properly randomized controlled trial

B. There is fair evidence to recommend the clinical preventive action

II-2: Evidence from well-designed cohort (prospective or retrospective) or case-control studies, preferably from more than one centre or research group

C. The existing evidence is conflicting and does not allow to make a recommendation for or against use of the clinical preventive action; however, other factors may influence decision-making

II-3: Evidence obtained from comparisons between times or places with or without the intervention. Dramatic results in uncontrolled experiments (such as the results of treatment with penicillin in the 1940s) could also be included in this category III: Opinions of respected authorities, based on clinical experience, descriptive studies, or reports of expert committees

anomalies has decreased by 50% in infants born after 24 weeks.5 This is likely at least partially related to early diagnosis of congenital anomalies leading to either pregnancy termination or better neonatal care. Second trimester diagnosis of congenital anomalies also provides the opportunity for fetal therapy. The literature includes descriptions of anatomical surveys being performed before 18 weeks6 but other studies have repeatedly shown that more anomalies are diagnosed if the scan is done after 18 weeks.1,2 A study done by Lantz and Chisolm7 found that in normal sized and in overweight patients, a fetal anatomy survey for the detection of congenital anomalies was more likely to be incomplete if performed before 18 weeks than if performed at a later gestational age. In underweight patients, no difference was found. The Royal College of Obstetricians and Gynaecologists recommends that the second trimester fetal anatomical scan be performed between 20 and 23 weeks.8 We recommend that the second trimester ultrasound be performed after 18 weeks and before 22 weeks’ gestation.9 This will allow pregnancy options if an anomaly is diagnosed and avoid the added cost and unnecessary ultrasound exposure of a repeat scan related to incomplete fetal anatomy survey. This is a growing concern, as patients are increasingly likely to have a high BMI. When an ultrasound is performed at 18 to 22 weeks’ gestation, the maternal organs that should be screened are the cervix, uterus, and adnexa. Any abnormality of these structures should be documented. 274

The number of fetuses and the presence of cardiac activity should be recorded. If a multiple gestation is diagnosed, the chorionicity and amnionicity should be assessed and documented. The fetal biometric measurements should include at least the following: biparietal diameter, head circumference, abdominal circumference, and femur length. Absolute biometric measurements with their estimated gestational age should be documented and reported. A composite estimated gestational age should also be reported, taking into consideration measurement errors arising from abnormal fetal body parts. Moreover, the gestational age/size should be interpreted in correlation with any previous obstetrical ultrasound if available. This will allow the care provider to confirm if fetal growth has been appropriate. Due date should not be adjusted if it has been established by an earlier ultrasound. Fetal Anatomy Survey to Be Performed During a Complete Obstetrical Routine Second Trimester Ultrasound

The standard fetal brain anatomical survey should include an assessment and documentation of the following anatomical landmarks: the shape of the fetal skull, the cavum septi pellucidi, the midline falx, the choroid plexus, the lateral cerebral ventricles, the cerebellum, the cisterna magna, and the nuchal fold. The face should be scanned to assess and document the orbits and lips. In the thorax, the heart and lungs should be examined. Examination of the fetal heart includes its relationship with the chest (axis, size, and position) as well as the assessment

of the four chamber view and the relationships of the outflow tracts. The fetal cardiac motion should be observed and a fetal heart rate recorded. The lungs should be examined for their echogenicity. In the fetal abdomen, the anatomical survey should include the position, presence, and situs of the stomach, and visualization of the bowel, bladder, kidneys, cord insertion, and number of cord vessels. The fetal spine should be viewed throughout its length in sagittal, coronal, and transverse planes if possible. The skin line should be seen away from the uterine wall. This cannot always be documented with still images. An attempt should be made to assess the fetal genitalia. All four limbs to the level of the hands and feet should be visualized, and the presence of hands and feet should be noted. Subjective assessment of bone size, shape, and density should be done. This cannot always be documented with still images. The placenta should be examined for position, appearance, and presence or absence of abnormalities. The placental location and its relationship to the internal cervical os should be assessed and documented. A qualitative assessment of the amniotic fluid volume should be made. It should be reported as normal, increased, decreased, or absent. Table 1 shows the recommended content of the report, but other information may be provided in such consultations. The ultrasound report should include all ultrasound information necessary for appropriate management of the pregnancy. It needs to include the date the scan was performed and the composite gestational age based on fetal biometric measurements. The number and size of fetuses and the measurements obtained to determine them should be noted. If a structure was not seen, this should be reported, along with the reason it was not seen. If fetal or maternal abnormalities are reported, a differential diagnosis and, when appropriate, a recommendation for further investigation should be provided. The report should comment on any significant technical difficulty of the examination. The final report should be easy to read. It is acknowledged that even in the best of hands and circumstances, the 18–22 week scan has limitations and cannot detect all fetal and maternal abnormalities.10 Any significant fetal or maternal abnormalities need to be reported promptly to the caregiver. The communication should be recorded in the patient’s file. An ultrasound report summary should provide: • Estimation of gestational age according to ultrasound if this is the first obstetrical ultrasound, estimation of gestational age according to last menstrual period dates, and the expected date of confinement • Appropriateness of the biometry, size, growth, and estimated gestational age