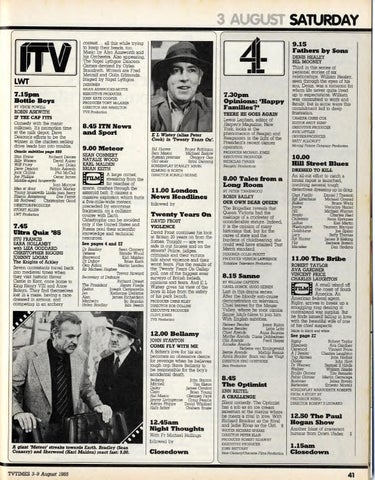 contest... all this while trying to keep their heads, too. Music by Alyn Ainsworth and his Orchestra. Also appearing, The Nigel Lythgoe Dancers. Games devised by Gyles Brandreth. Writers are Fred Metcalf and Colin Edmonds. Staged by Nigel Lythgoe.

7.45 Ultra Quiz '85 STU FRANCIS SARA HOLLAMBY with LIZA GODDARD CHRISTOPHER BIGGINS JOHNNY LOGAN The Knights of Arkley Seven contestants travel back into medieval times when they visit historic Hever Castle in Kent, once home to King Henry VIII and Anne Boleyn. They find themselves lost in a maze, having a race dressed in armour, and competing in an archery

David Frost continues his look at Britain 20 years on from the Sixties. Tonight â&#x20AC;&#x201D; are we safe in our houses and on the streets? Police, judges, criminals and their victims talk about violence and their worst fears. Plus the results of the Twenty Y ears On Gallup poll, one of the biggest ever surveys of British beliefs, opinions and fears. And E L Wistey gives his view of the boys in blue from the safety of his park bench. PRODUCER CHRIS RILEY DIRECTOR BOB COLLINS EXECUTIVE PRODUCER CLIVE JONES TVS Production

With Fr Michael Hollings. followed by

York, looks at the phenomenon of Reagan and Reaganism in the light of the President's recent cancer operation.

DENLS HEALEY BEL MOONEY Third in this series of personal stories of six relationships. William Healey, seen through the eyes of his son, Denis, was a romantic for whom life never quite lived up to expectations. William was committed to work and family, but in some ways this commitment led to deep frustration. CAMERA CHRIS COX EDITOR ANDY KEMP EXECUTIVE PRODUCER AVIE LITTLER DEVISER/PRODUCER BRITT ALLCROFT Moving Picture Company Production

An all-out effort to catch a brutal rapist is launched, involving several tough detectives dressing up in drag.

ROBIN BAILEY OUR OWN DEAR QUEEN

The Brigadier reveals that Queen Victoria had the makings of a cricketer of considerable stature. Indeed, it is the opinion of many historians that, but for the cares of state and the burdens of childbearing, she could well have attained Test Match standard. DESIGNER COLIN PIGOTT PRODUCER VERNON LAWRENCE Y orkshire Television Production

8.45 The Optimist ENN REITEL A CHALLENGE

Silent comedy. The Optimist has a job as an ice cream salesman at the marina where he meets a rival in love. With Richard Brooker as the Rival and Jadie Rivas as the Girl. WRITER RICHARD SPARKS DIRECTOR PETER ELLIS PRODUCER ROBERT SIDAWAY EXECUTIVE PRODUCER JOHN BRITTANY New Century/Chari=a Films Production

11.00 The Bribe ROBERT TAYLOR AVA GARDNER VINCENT PRICE CHARLES LAUGHTON A small island off the coast of South America. An American federal agent, Rigby, arrives to break up a smuggling ring dealing in contraband war surplus. But he finds himself falling in love with the beautiful wife of one of his chief suspects. Made in black and white

12.50 The Paul Hogan Show Another blast of irreverent humour from Down Under.