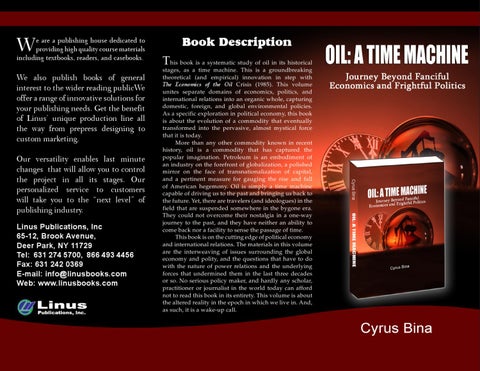 We also publish books of general interest to the wider reading publicWe offer a range of innovative solutions for your publishing needs. Get the benefit of Linusâ&#x20AC;&#x2122; unique production line all the way from prepress designing to custom marketing. Our versatility enables last minute changes that will allow you to control the project in all its stages. Our personalized service to customers will take you to the â&#x20AC;&#x153;next levelâ&#x20AC;? of publishing industry. Linus Publications, Inc 65-12, Brook Avenue, Deer Park, NY 11729 Tel: 631 274 5700, 866 493 4456 Fax: 631 242 0369 E-mail: info@linusbooks.com Web: www.linusbooks.com

stages, as a time machine. This is a groundbreaking theoretical (and empirical) innovation in step with The Economics of the Oil Crisis (1985). This volume unites separate domains of economics, politics, and international relations into an organic whole, capturing domestic, foreign, and global environmental policies. As a specific exploration in political economy, this book is about the evolution of a commodity that eventually transformed into the pervasive, almost mystical force that it is today. More than any other commodity known in recent history, oil is a commodity that has captured the popular imagination. Petroleum is an embodiment of an industry on the forefront of globalization, a polished mirror on the face of transnationalization of capital, and a pertinent measure for gauging the rise and fall of American hegemony. Oil is simply a time machine capable of driving us to the past and bringing us back to the future. Yet, there are travelers (and ideologues) in the field that are suspended somewhere in the bygone era. They could not overcome their nostalgia in a one-way journey to the past, and they have neither an ability to come back nor a facility to sense the passage of time. This book is on the cutting edge of political economy and international relations. The materials in this volume are the interweaving of issues surrounding the global economy and polity, and the questions that have to do with the nature of power relations and the underlying forces that undermined them in the last three decades or so. No serious policy maker, and hardly any scholar, practitioner or journalist in the world today can afford not to read this book in its entirety. This volume is about the altered reality in the epoch in which we live in. And, as such, it is a wake-up call.

CHAPTER 1: Internationalization of the Oil Industry: Simple Oil Shocks or Structural Crisis? CHAPTER 2: Some Controversies in the Development of Rent Theory: The Nature of Oil Rent CHAPTER 3: Limits to OPEC Pricing: OPEC Profits and the Nature of Global Oil Accumulation CHAPTER 4: The Globalization of Oil CHAPTER 5: OPEC in the Epoch of Globalization: An Event Study of Global Oil Prices CHAPTER 6: Price Formation, Control and Competition in the International Energy Industry CHAPTER 7: For Oil or for Lost Hegemony: Is the Cart Before the Horse? CHAPTER 8: The Rhetoric of Oil, and the Dilemma of War and American Hegemony CHAPTER 9: On Sand Castles and Sandcastle Conjectures CHAPTER 10: Oil, Japan and Globalization CHAPTER 11: Toward A New World Order: U.S. Hegemony, Client States and the ‘Islamic Alternative’ CHAPTER 12: Is It the Oil, Stupid? CHAPTER 13: The American Tragedy: The Quagmire of War, Rhetoric of Oil, and the Conundrum of Hegemony CHAPTER 14: Oil, War, Lies, and ‘Bullshit’ NOTES BIBLIOGRAPHY ACKNOWLWDGMENTS ABOUT THE AUTHOR

About the Author Cyrus Bina, Distinguished Research Professor of Economics at the University of Minnesota (Morris Campus), is a prominent political economist. His pioneering work on the transformation and eventual globalization of oil first appeared in The Economics of the Oil Crisis (1985) and then further expanded by numerous articles in scholarly and policy journals across the globe. He has co-edited two major volumes on completely diverse subjects, namely Modern Capitalism and Islamic Ideology in Iran (1991) and Wage Labor in the Late Twentieth Century (1996). Bina, a specialist with an intimate knowledge of Iran’s economy and polity, is an authority on the social transformation of modern Iran. He has written extensively (and spoken in numerous occasions in person and via satellite) on post-revolutionary Iran and the nature of conflict in the Middle East. This extends to probing the post-war U.S. foreign policy and critical examination of U.S. hegemony and contradictions that resulted in undesirability of democracy and imposition of dictatorial regimes across the now defunct Pax Americana. In addition, Bina is a scholar of labor relations and social movements around the globe. His scores of articles on global transformation, technological change, and formation of skills (beyond the boundaries of nation-states) are also testament to his encyclopedic knowledge of globalization that is both beyond the neoliberal and the neo-conservative policies, and critical of the anachronistic and desperate interventions by the United States. Among Bina’s forthcoming books, are Oil, War, and Global Polity (Palgrave, 2012), Alternative Theories of Competition: Challenges to Orthodoxy (co-editor, Routledge 2011), and a three-volume International Economics: An Encyclopedia of Global Trade, Capital, Labor, Technology, and Innovation (editor, Greenwood, 2014). Bina is an active member of many professional and civic organizations, including Economists for Peace and Security, and Union of Concerned Scientists. He is currently an editor of the Journal of Critical Studies in Business and Society.