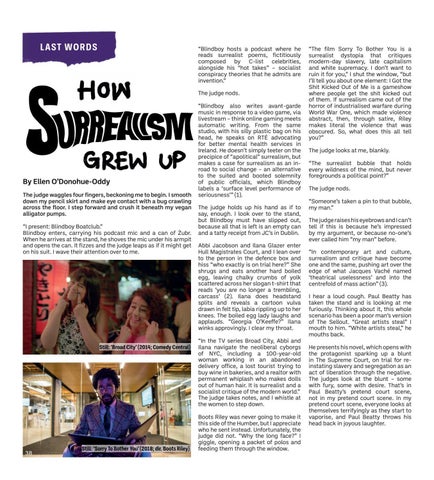 “Blindboy hosts a podcast where he reads surrealist poems, fictitiously composed by C-list celebrities, alongside his “hot takes” – socialist conspiracy theories that he admits are invention.” The judge nods.

By Ellen O’Donohue-Oddy The judge waggles four fingers, beckoning me to begin. I smooth down my pencil skirt and make eye contact with a bug crawling across the floor. I step forward and crush it beneath my vegan alligator pumps. “I present: Blindboy Boatclub.” Blindboy enters, carrying his podcast mic and a can of Żubr. When he arrives at the stand, he shoves the mic under his armpit and opens the can. It fizzes and the judge leaps as if it might get on his suit. I wave their attention over to me.

“Blindboy also writes avant-garde music in response to a video game, via livestream – think online gaming meets automatic writing. From the same studio, with his silly plastic bag on his head, he speaks on RTÉ advocating for better mental health services in Ireland. He doesn’t simply teeter on the precipice of “apolitical” surrealism, but makes a case for surrealism as an inroad to social change – an alternative to the suited and booted solemnity of public officials, which Blindboy labels a ‘surface level performance of seriousness’” (1). The judge holds up his hand as if to say, enough. I look over to the stand, but Blindboy must have slipped out, because all that is left is an empty can and a tatty receipt from JC’s in Dublin. Abbi Jacobson and Ilana Glazer enter Hull Magistrates Court, and I lean over to the person in the defence box and hiss “who exactly is on trial here?” She shrugs and eats another hard boiled egg, leaving chalky crumbs of yolk scattered across her slogan t-shirt that reads ‘you are no longer a trembling, carcass’ (2). Ilana does headstand splits and reveals a cartoon vulva drawn in felt tip, labia rippling up to her knees. The boiled egg lady laughs and applauds. “Georgia O’Keeffe?” Ilana winks approvingly. I clear my throat. “In the TV series Broad City, Abbi and Ilana navigate the neoliberal cyborgs of NYC, including a 100-year-old woman working in an abandoned delivery office, a lost tourist trying to buy wine in bakeries, and a realtor with permanent whiplash who makes dolls out of human hair. It is surrealist and a socialist critique of the modern world.” The judge takes notes, and I whistle at the women to step down. Boots Riley was never going to make it this side of the Humber, but I appreciate who he sent instead. Unfortunately, the judge did not. “Why the long face?” I giggle, opening a packet of polos and feeding them through the window.

“The film Sorry To Bother You is a surrealist dystopia that critiques modern-day slavery, late capitalism and white supremacy. I don’t want to ruin it for you,” I shut the window, “but I’ll tell you about one element: I Got the Shit Kicked Out of Me is a gameshow where people get the shit kicked out of them. If surrealism came out of the horror of industrialised warfare during World War One, which made violence abstract, then, through satire, Riley makes literal the violence that was obscured. So, what does this all tell you?” The judge looks at me, blankly. “The surrealist bubble that holds every wildness of the mind, but never foregrounds a political point?” The judge nods. “Someone’s taken a pin to that bubble, my man.” The judge raises his eyebrows and I can’t tell if this is because he’s impressed by my argument, or because no-one’s ever called him “my man” before. “In contemporary art and culture, surrealism and critique have become one and the same, pushing art over the edge of what Jacques Vaché named ‘theatrical uselessness’ and into the centrefold of mass action” (3). I hear a loud cough. Paul Beatty has taken the stand and is looking at me furiously. Thinking about it, this whole scenario has been a poor man’s version of The Sellout. “Great artists steal” I mouth to him. “White artists steal,” he mouths back. He presents his novel, which opens with the protagonist sparking up a blunt in The Supreme Court, on trial for reinstating slavery and segregation as an act of liberation through the negative. The judges look at the blunt – some with fury, some with desire. That’s in Paul Beatty’s pretend court scene, not in my pretend court scene. In my pretend court scene, everyone looks at themselves terrifyingly as they start to vaporise, and Paul Beatty throws his head back in joyous laughter.

For our eighth issue, we bring you artists from the PRECIPICE: those fighting apartheid in Palestine, homophobia on the streets of Belfast, or eviction in Tanzania. We are also privileged to be showcasing inspirational artists breaking the stigma of homelessness and disability through their work. They remind us that art at its best creates belonging, even in the darkest isolation. The traditional institutions have failed us, and it’s time to build new organisations and ecosystems, free from corporate control and capable of taking us back from the brink. As a team of volunteers, we couldn’t have made this magazine without the support and collaboration of our partner organisations. Throughout this issue you’ll notice a number of full-page artworks, from the Periodic Table of Feasible Utopia to the Right To Roam campaign. Tear them out and stick them up. If we must have walls, make them beautiful. 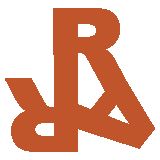