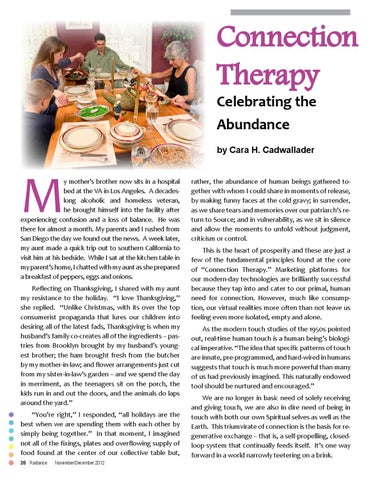 y mother’s brother now sits in a hospital bed at the VA in Los Angeles. A decadeslong alcoholic and homeless veteran, he brought himself into the facility after experiencing confusion and a loss of balance. He was there for almost a month. My parents and I rushed from San Diego the day we found out the news. A week later, my aunt made a quick trip out to southern California to visit him at his bedside. While I sat at the kitchen table in my parent’s home, I chatted with my aunt as she prepared a breakfast of peppers, eggs and onions. Reflecting on Thanksgiving, I shared with my aunt my resistance to the holiday. “I love Thanksgiving,” she replied. “Unlike Christmas, with its over the top consumerist propaganda that lures our children into desiring all of the latest fads, Thanksgiving is when my husband’s family co-creates all of the ingredients – pastries from Brooklyn brought by my husband’s youngest brother; the ham brought fresh from the butcher by my mother-in-law; and flower arrangements just cut from my sister-in-law’s garden – and we spend the day in merriment, as the teenagers sit on the porch, the kids run in and out the doors, and the animals do laps around the yard.” “You’re right,” I responded, “all holidays are the best when we are spending them with each other by simply being together.” In that moment, I imagined not all of the fixings, plates and overflowing supply of food found at the center of our collective table but, 26 Radiance

rather, the abundance of human beings gathered together with whom I could share in moments of release, by making funny faces at the cold gravy; in surrender, as we share tears and memories over our patriarch’s return to Source; and in vulnerability, as we sit in silence and allow the moments to unfold without judgment, criticism or control. This is the heart of prosperity and these are just a few of the fundamental principles found at the core of “Connection Therapy.” Marketing platforms for our modern-day technologies are brilliantly successful because they tap into and cater to our primal, human need for connection. However, much like consumption, our virtual realities more often than not leave us feeling even more isolated, empty and alone. As the modern touch studies of the 1950s pointed out, real-time human touch is a human being’s biological imperative. “The idea that specific patterns of touch are innate, pre-programmed, and hard-wired in humans suggests that touch is much more powerful than many of us had previously imagined. This naturally endowed tool should be nurtured and encouraged.” We are no longer in basic need of solely receiving and giving touch, we are also in dire need of being in touch with both our own Spiritual selves as well as the Earth. This triumvirate of connection is the basis for regenerative exchange – that is, a self-propelling, closedloop system that continually feeds itself. It’s one way forward in a world narrowly teetering on a brink.

November/December 2012 Radiance magazine published by the Temple of Light 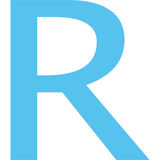