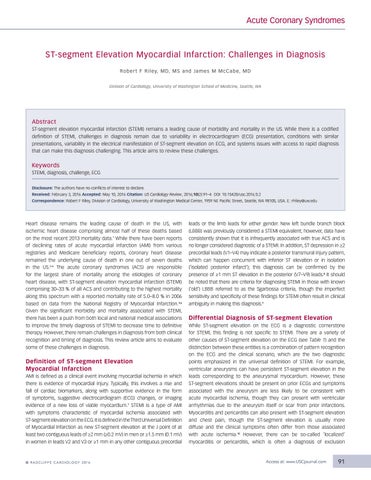 Abstract ST-segment elevation myocardial infarction (STEMI) remains a leading cause of morbidity and mortality in the US. While there is a codified definition of STEMI, challenges in diagnosis remain due to variability in electrocardiogram (ECG) presentation, conditions with similar presentations, variability in the electrical manifestation of ST-segment elevation on ECG, and systems issues with access to rapid diagnosis that can make this diagnosis challenging. This article aims to review these challenges.

Heart disease remains the leading cause of death in the US, with ischemic heart disease comprising almost half of these deaths based on the most recent 2013 mortality data.1 While there have been reports of declining rates of acute myocardial infarction (AMI) from various registries and Medicare beneficiary reports, coronary heart disease remained the underlying cause of death in one out of seven deaths in the US.2–4 The acute coronary syndromes (ACS) are responsible for the largest share of mortality among the etiologies of coronary heart disease, with ST-segment elevation myocardial infarction (STEMI) comprising 30–33 % of all ACS and contributing to the highest mortality along this spectrum with a reported mortality rate of 5.0–8.0 % in 2006 based on data from the National Registry of Myocardial Infarction.5,6 Given the significant morbidity and mortality associated with STEMI, there has been a push from both local and national medical associations to improve the timely diagnosis of STEMI to decrease time to definitive therapy. However, there remain challenges in diagnosis from both clinical recognition and timing of diagnosis. This review article aims to evaluate some of these challenges in diagnosis.

Definition of ST-segment Elevation Myocardial Infarction AMI is defined as a clinical event involving myocardial ischemia in which there is evidence of myocardial injury. Typically, this involves a rise and fall of cardiac biomarkers, along with supportive evidence in the form of symptoms, suggestive electrocardiogram (ECG) changes, or imaging evidence of a new loss of viable myocardium.7 STEMI is a type of AMI with symptoms characteristic of myocardial ischemia associated with ST-segment elevation on the ECG. It is defined in the Third Universal Definition of Myocardial Infarction as new ST-segment elevation at the J point of at least two contiguous leads of ≥2 mm (≥0.2 mV) in men or ≥1.5 mm (0.1 mV) in women in leads V2 and V3 or ≥1 mm in any other contiguous precordial

leads or the limb leads for either gender. New left bundle branch block (LBBB) was previously considered a STEMI equivalent; however, data have consistently shown that it is infrequently associated with true ACS and is no longer considered diagnostic of a STEMI. In addition, ST depression in ≥2 precordial leads (V1–V4) may indicate a posterior transmural injury pattern, which can happen concurrent with inferior ST elevation or in isolation (‘isolated posterior infarct’); this diagnosis can be confirmed by the presence of ≥1 mm ST elevation in the posterior (V7–V9) leads.8 It should be noted that there are criteria for diagnosing STEMI in those with known (‘old‘) LBBB referred to as the Sgarbossa criteria, though the imperfect sensitivity and specificity of these findings for STEMI often result in clinical ambiguity in making this diagnosis.9