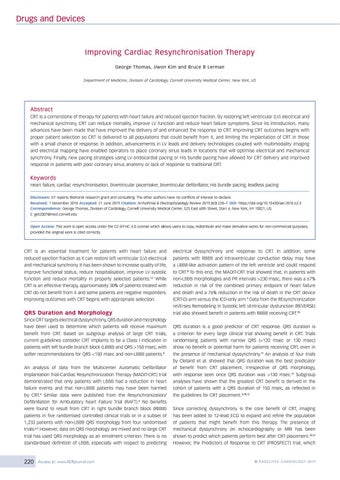 Abstract CRT is a cornerstone of therapy for patients with heart failure and reduced ejection fraction. By restoring left ventricular (LV) electrical and mechanical synchrony, CRT can reduce mortality, improve LV function and reduce heart failure symptoms. Since its introduction, many advances have been made that have improved the delivery of and enhanced the response to CRT. Improving CRT outcomes begins with proper patient selection so CRT is delivered to all populations that could benefit from it, and limiting the implantation of CRT in those with a small chance of response. In addition, advancements in LV leads and delivery technologies coupled with multimodality imaging and electrical mapping have enabled operators to place coronary sinus leads in locations that will optimise electrical and mechanical synchrony. Finally, new pacing strategies using LV endocardial pacing or His bundle pacing have allowed for CRT delivery and improved response in patients with poor coronary sinus anatomy or lack of response to traditional CRT.

CRT is an essential treatment for patients with heart failure and reduced ejection fraction as it can restore left ventricular (LV) electrical and mechanical synchrony. It has been shown to increase quality of life, improve functional status, reduce hospitalisation, improve LV systolic function and reduce mortality in properly selected patients.1,2 While CRT is an effective therapy, approximately 30% of patients treated with CRT do not benefit from it and some patients are negative responders. Improving outcomes with CRT begins with appropriate selection.

QRS Duration and Morphology Since CRT targets electrical dyssynchrony, QRS duration and morphology have been used to determine which patients will receive maximum benefit from CRT. Based on subgroup analysis of large CRT trials, current guidelines consider CRT implants to be a Class I indication in patients with left bundle branch block (LBBB) and QRS >150 msec, with softer recommendations for QRS <150 msec and non-LBBB patients.3 An analysis of data from the Multicenter Automatic Defibrillator Implantation Trial-Cardiac Resynchronization Therapy (MADIT-CRT) trial demonstrated that only patients with LBBB had a reduction in heart failure events and that non-LBBB patients may have been harmed by CRT.4 Similar data were published from the Resynchronization/ Defibrillation for Ambulatory heart Failure Trial (RAFT).5 No benefits were found to result from CRT in right bundle branch block (RBBB) patients in five randomised controlled clinical trials or in a subset of 1,233 patients with non-LBBB QRS morphology from four randomised trials.6,7 However, data on QRS morphology are mixed and no large CRT trial has used QRS morphology as an enrolment criterion. There is no standardised definition of LBBB, especially with respect to predicting

electrical dyssynchrony and response to CRT. In addition, some patients with RBBB and intraventricular conduction delay may have a LBBB-like activation pattern of the left ventricle and could respond to CRT.8 To this end, the MADIT-CRT trial showed that, in patients with non-LBBB morphologies and PR intervals >230 msec, there was a 67% reduction in risk of the combined primary endpoint of heart failure and death and a 76% reduction in the risk of death in the CRT device (CRT-D) arm versus the ICD-only arm.9 Data from the REsynchronization reVErses Remodeling in Systolic left vEntricular dysfunction (REVERSE) trial also showed benefit in patients with RBBB receiving CRT.10 QRS duration is a good predictor of CRT response. QRS duration is a criterion for every large clinical trial showing benefit in CRT. Trials randomising patients with narrow QRS (<120 msec or 130 msec) show no benefit or potential harm for patients receiving CRT, even in the presence of mechanical dyssynchrony.11 An analysis of four trials by Cleland et al. showed that QRS duration was the best predicator of benefit from CRT placement, irrespective of QRS morphology, with response seen once QRS duration was >130 msec.12 Subgroup analyses have shown that the greatest CRT benefit is derived in the cohort of patients with a QRS duration of 150 msec, as reflected in the guidelines for CRT placement.3,10,12 Since correcting dyssynchrony is the core benefit of CRT, imaging has been added to 12-lead ECG to expand and refine the population of patients that might benefit from this therapy. The presence of mechanical dyssynchrony on echocardiography or MRI has been shown to predict which patients perform best after CRT placement.13,14 However, the Predictors of Response to CRT (PROSPECT) trial, which