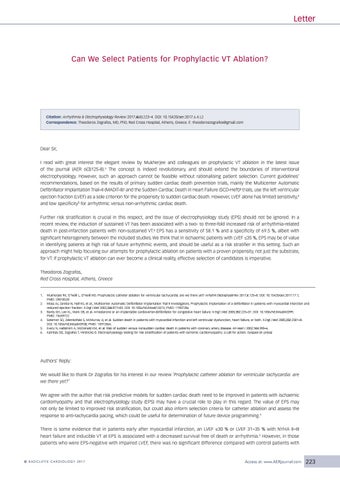 Can We Select Patients for Prophylactic VT Ablation?

Dear Sir, I read with great interest the elegant review by Mukherjee and colleagues on prophylactic VT ablation in the latest issue of the journal (AER 6(3)125-8).1 The concept is indeed revolutionary, and should extend the boundaries of interventional electrophysiology. However, such an approach cannot be feasible without rationalising patient selection. Current guidelines’ recommendations, based on the results of primary sudden cardiac death prevention trials, mainly the Multicenter Automatic Defibrillator Implantation Trial–II (MADIT-II)2 and the Sudden Cardiac Death in Heart Failure (SCD-Heft)3 trials, use the left ventricular ejection fraction (LVEF) as a sole criterion for the propensity to sudden cardiac death. However, LVEF alone has limited sensitivity,4 and low specificity5 for arrhythmic versus non-arrhythmic cardiac death. Further risk stratification is crucial in this respect, and the issue of electrophysiology study (EPS) should not be ignored. In a recent review, the induction of sustained VT has been associated with a two- to three-fold increased risk of arrhythmia-related death in post-infarction patients with non-sustained VT.6 EPS has a sensitivity of 58.1 % and a specificity of 69.5 %, albeit with significant heterogeneity between the included studies. We think that in ischaemic patients with LVEF ≤35 %, EPS may be of value in identifying patients at high risk of future arrhythmic events, and should be useful as a risk stratifier in this setting. Such an approach might help focusing our attempts for prophylactic ablation on patients with a proven propensity, not just the substrate, for VT. If prophylactic VT ablation can ever become a clinical reality, effective selection of candidates is imperative. Theodoros Zografos, Red Cross Hospital, Athens, Greece

Authors’ Reply: We would like to thank Dr Zografos for his interest in our review ‘Prophylactic catheter ablation for ventricular tachycardia: are we there yet?’ We agree with the author that risk predictive models for sudden cardiac death need to be improved in patients with ischaemic cardiomyopathy and that electrophysiology study (EPS) may have a crucial role to play in this regard. The value of EPS may not only be limited to improved risk stratification, but could also inform selection criteria for catheter ablation and assess the response to anti-tachycardia pacing, which could be useful for determination of future device programming.1 There is some evidence that in patients early after myocardial infarction, an LVEF ≤30 % or LVEF 31–35 % with NYHA II–III heart failure and inducible VT at EPS is associated with a decreased survival free of death or arrhythmia.2 However, in those patients who were EPS-negative with impaired LVEF, there was no significant difference compared with control patients with