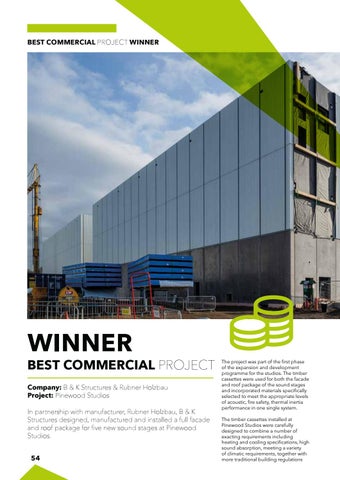 The project was part of the first phase of the expansion and development programme for the studios. The timber cassettes were used for both the facade and roof package of the sound stages and incorporated materials specifically selected to meet the appropriate levels of acoustic, fire safety, thermal inertia performance in one single system.

COMMERCIAL PROJECT OF THE YEAR

The timber cassettes installed at Pinewood Studios were carefully designed to combine a number of exacting requirements including heating and cooling specifications, high sound absorption, meeting a variety of climatic requirements, together with more traditional building regulations