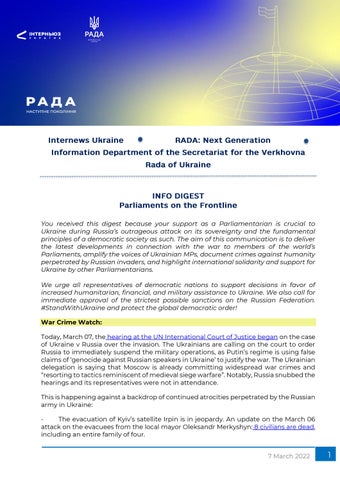 You received this digest because your support as a Parliamentarian is crucial to Ukraine during Russia’s outrageous attack on its sovereignty and the fundamental principles of a democratic society as such. The aim of this communication is to deliver the latest developments in connection with the war to members of the world’s Parliaments, amplify the voices of Ukrainian MPs, document crimes against humanity perpetrated by Russian invaders, and highlight international solidarity and support for Ukraine by other Parliamentarians. We urge all representatives of democratic nations to support decisions in favor of increased humanitarian, financial, and military assistance to Ukraine. We also call for immediate approval of the strictest possible sanctions on the Russian Federation. #StandWithUkraine and protect the global democratic order! War Crime Watch: Today, March 07, the hearing at the UN International Court of Justice began on the case of Ukraine v Russia over the invasion. The Ukrainians are calling on the court to order Russia to immediately suspend the military operations, as Putin’s regime is using false claims of ‘genocide against Russian speakers in Ukraine’ to justify the war. The Ukrainian delegation is saying that Moscow is already committing widespread war crimes and “resorting to tactics reminiscent of medieval siege warfare”. Notably, Russia snubbed the hearings and its representatives were not in attendance. This is happening against a backdrop of continued atrocities perpetrated by the Russian army in Ukraine: The evacuation of Kyiv’s satellite Irpin is in jeopardy. An update on the March 06 attack on the evacuees from the local mayor Oleksandr Merkyshyn: 8 civilians are dead, including an entire family of four. 7 March 2022

Kyiv’s biggest children’s hospital Okhmatdyt has been hit by several missile fragments, damaging the infrastructure. This is at least the third time the hospital received damage since the war started. Second-largest city in the south of Ukraine, the port and ship-building center Mykolaiv, was shelled overnight on March 07. Residential areas were targeted, with several fires and severe damages to multi-apartment buildings. (Mykolaiv, Ukraine. Photo: The State Emergency Service of Ukraine)

March 07 morning, a lyceum in Kharkiv oblast was hit by Russian artillery, leaving at least 1 person dead and several injured, including children. This is another educational institution on a long list of Russian targets - according to Minister of Education and Science Serhiy Shkarlet, 211 schools in Ukraine were damaged or destroyed by Russian troops. Reactions in the parliaments globally: USA US House of Representatives Speaker Nancy Pelosi said in a letter on March 06 that the chamber is &quot;exploring&quot; legislation to ban the import of Russian oil and that Congress intends to enact this week $10 billion in aid for Ukraine in response to Moscow&#39;s military invasion of its neighbor.

EU On March 07 European Parliament President Roberta Metsola hosted a meeting with Speakers of the European Union’s National Parliaments and the Speaker of the Verkhovna Rada of Ukraine Ruslan Stefanchuk. During the meeting, President Metsola announced that a structure that brings together the key European Parliament interlocutors with their counterparts from the Rada has been set up. This has been done to establish the priorities and needs of the Rada under the current circumstances and in the future. Tomorrow the EU Commission will table proposals on how to quickly reduce dependency on Russian fossil fuels, Ursula von der Leyen tweeted on March 07. The Union aims to protect the consumers and EU companies, while expanding sanctions against Russia in connection with its invasion of Ukraine. EU leaders are posed to discuss the war in Ukraine and the country’s application to join the Union on Thursday, March 10, reports Charles Michel. Czech MEPs are calling for a revision of the European Green Deal in connection with the potential reduction of dependency on (Russian) fossil fuels. The current climate goal plans of several countries include a switch to natural gas and then to low-emission gas. The call for an assessment of the impact of the war in Ukraine was also supported by MEPs from Poland, Germany, Romania, Denmark, Latvia, Sweden and Slovakia UK British MPs are continuing to pressure the government to relax its stance on Ukrainian refugees and calling the current response to the humanitarian crisis caused by the war ‘shameful’. Kent MP who recently returned from Ukraine, Adam Holloway, said that the UK should accept ‘many many many tens of thousands’ of Ukrainians fleeing the war. However, the government remains resistant – only 50 visas have been issued to Ukrainian residents so far. Canada Canadian MP Larry Maguire spoke out in support of last week’s motion by the Conservatives to expedite natural gas projects in Canada. ‘Not only can we support Ukraine in its time of need, but we must also ensure Russia doesn’t have the financial means to terrorize sovereign nations.’, he said of the motion, which can help displace

Russian gas in European markets. The parliament is expected to vote on this matter later in March. China As the Parliament session goes on in Beijing, the Chinese Foreign Minister Wang Yi has come out with a statement about the nation’s readiness to play ‘a constructive role in urging peace talks’ between Ukraine and Russia. He also emphasized China’s ‘rock solid’ relations with Russia Germany The idea of bringing back national service is gaining popularity in the Bundestag. Political leaders from all sides of the German Parliament have backed the reintroduction of compulsory service in the German military, a week after Chancellor Olaf Scholz pledged a one-time £85bn spend to boost the strength of the country&#39;s forces. This comes in direct response to Russia’s invasion of Ukraine, which demonstrated that ‘peace is not a law of nature’. Denmark Danish Prime Minister Mette Frederiksen told the press on March 06 that the country plans to significantly increase its defense budget and eventually become independent of Russian natural gas. The decision was agreed between the main parliamentary parties. This comes in direct response to Russia’s ‘pointless and brutal attack on Ukraine’. The PM noted that Ukraine’s struggle was a ‘test of strength’ for everything Europeans believe in, such as democracy, human rights, peace and freedom. Iceland Icelandic MPs across the board are open to stationing a permanent NATO contingent on the island in the wake of Russia’s invasion of Ukraine. The Nordic nation doesn’t have an army of its own, and the current security situation causes great concerns for them New Zealand New Zealand will increase pressure on Russia – this week, a bill will be rushed through parliament to significantly ramp up sanctions against the Russian Federation and its oligarchs. The Russia Sanctions Bill is the “first of its kind” in New Zealand, which has no legal framework for passing broader, unilateral sanctions and usually only does so when

called on by the UN security council. The new sanctions would enable the government to freeze assets located in New Zealand and prevent those sanctioned from moving assets to the country or using its financial system as “a back door to get around sanctions” imposed by other countries, PM Jacinda Ardern said. Georgia The relations between Ukraine and Georgia continue to deteriorate – first, because of the current government’s tepid response to the Russian invasion, and now over the impending renewal of dairy exports to Russia. The Georgian authorities have officially confirmed that the talks, ongoing since 2020, are close to fruition. This comes amid widespread sanctions against Russia (Georgia hasn’t joined the international community in imposing them), as well as public and opposition protests in the Caucasus in support of Ukraine. Two members of the opposition Droa party are currently under administrative arrest due to speaking out against the resumption of a business relationship with Russia. Chairman of Rules and Procedural Issues Committee of the Georgian Parliament Irakli Kadagishvili has called the dairy issue a ‘political provocation’, saying: ‘These negotiations were not underway at this moment [during the war] - the negotiations started three years ago. The point is that Russia did not open the market for Georgian products and now made a political decision’ South Africa The official opposition party Democratic Alliance has launched an online petition, urging the South African government to take a decisive stand against the Russian invasion of Ukraine. The country abstained from the UN vote to condemn the invasion, and according to the opposition, continues to ‘flip-flop’ on the war. The DA hopes to ensure that government uses its Brics membership to engage with Russia to bring about the withdrawal of its troops from Ukraine. Kyrgyz Republic Kyrgyz deputy Sultanbai Aijigitov said in a parliamentary meeting that migrant workers have started to return from Russia in the wake of Putin’s attack on Ukraine. &quot;Not only are their salaries low, but they are also forced to join their army,&quot; MP said.

UKRAINE’S PARLIAMENT: On March 06, head of Servant of the People faction in the Verkhovna Rada David Arakhamia said in an interview to Fox News that Ukraine is prepared to discuss some non-NATO models of security guarantees with different countries such as the US, China, UK. VRU Speaker Stefanchuk condemned Georgia’s intentions to develop trade on the Russian market in connection with the recent news that Russia plans to renew Georgian dairy imports. The VRU is calling for the establishment of a no-fly zone over Ukraine, saying that ‘our children need the closure of the skies’. Late on March 06, a statement was issued by the Information Department, calling on the international partners to protect children’s rights to life, guaranteed by international conventions. On March 07, three VRU committees joined the calls and issued their own statements: The Committee on Digital Transformation, the Committee on Agrarian Policy and the Committee on State Building, Local Governance, Regional and Urban Development. They each appealed to various reasons to close the skies over Ukraine. For example, the Agrarian Policy Committee warned the world that the war is a threat to global food security, as both Ukraine and Russia are major grain exporters, while the Local Governance Committee appealed to the international community to help stop the destruction of civilian infrastructure in Ukraine. The Committee on Finance, Taxation and Customs Policy appealed to foreign insurers to stop reinsuring the risks for Russian companies. The open letter was addressed to Lloyd&#39;s, Swiss Re Ltd., Munich Reinsurance Company, Gen Re, Hannover Re, SCOR SE, PartnerRe Ltd., Arch Re, AIG, Marsh, Willis. The members of the Anti-Corruption Committee on March 07 issued an appeal to the Group for the Development of Financial Measures to Combat Money Laundering and Terrorist Financing (FATF). Ukrainian MPs are urging the Group to include Russia in the list of high-risk jurisdictions and to exclude the country from FATF member states, as the actions of Russian Federation from 2014 until today could be classified as terrorism, according to FATF’s own regulations.

This digest is made possible by the generous support of the American people through the United States Agency for International Development (USAID). The contents are the responsibility of Internews Ukraine and do not necessarily reflect the views of USAID or the United States Government. 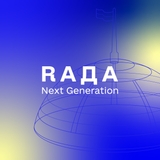