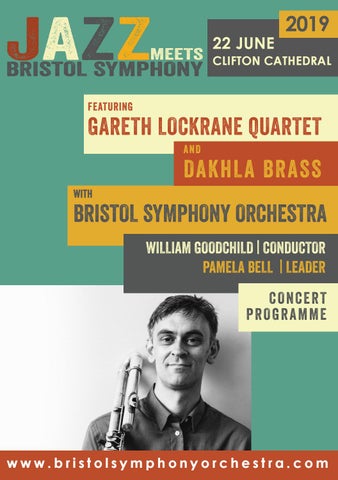 A programme that explores all aspects of the heart - physical, emotional and metaphysical - and its relationship with music. The programme includes a world premiere of a specially commissioned new work for percussionist Harriet Riley and Bristol Symphony composed by William Goodchild, and culminates in a performance of Rachmaninov’s magnificent Second Symphony. Come early and enjoy a drink in the lovely new bar at St George’s.

WELCOME Dear All Welcome to the third in our series of Jazz Meets Bristol Symphony concerts. Tonight we are performing with two featured jazz groups: London-based Gareth Lockrane Quartet, and Bristol’s own sextet, Dakhla Brass. This has been an exciting and creative collaboration: both bands have worked closely with us, choosing pieces from their recently released albums, transcribing them into notation and cascading the sound into symphony orchestra through bespoke arrangements for Bristol Symphony. There is a rich tradition of this genre of orchestral jazz. It originated in New York City in the 1920s with early innovators like Duke Ellington and Fletcher Henderson, and has developed throughout the history of jazz. Paul Whiteman’s ‘Experiments in Modern Music’ featuring George Gershwin’s Rhapsody in Blue comes to mind. Nelson Riddle’s work behind Ella Fitzgerald and Frank Sinatra is widely known and hugely popular, and orchestral jazz formed the basis of the film and musical scores of Hollywood’s golden era and beyond. The mix of jazz’s rhythmic and instrumental characteristics, balancing and combining scored and improvised performance, with the scale, structure and colouristic possibilities of an orchestra, made this genre highly distinctive. Tonight’s arrangements, created by the solo musicians on stage, draw influence from a variety of arrangers, notably Leonard Bernstein, Gil Evans, Lalo Schifrin and Vince Mendosa. Our sincere thanks to Helen and Peter Wilde for their continuing generous support of Bristol Symphony. Thanks also to Bristol music philanthropist, Steve Pain, and to Paragon Music Trust for their support. To keep in touch and up-to-date with our concerts and events, please sign up to our e-newsletters at www.bristolsymphonyorchestra.com. You can follow us on Facebook and Twitter @BristolSymphony. And remember to tell all your friends about us! Thank you so much for joining us. We hope you enjoy the concert and have a wonderful evening! With best wishes William Goodchild

Composed by Charlotte Ostafew Arranged for orchestra by Sophie Stockham

Composed by Charlotte ostafew Arranged for orchestra by Liam Treasure

Composed by Charlotte Ostafew Arranged for orchestra by Riaan Vosloo

Composed by Matt Brown Arranged for orchestra by Riaan Vosloo

DRINKS ON THE TERRACE | BY DONATION

Composed by Rodgers and Hart Arranged for orchestra by Kate Williams

We WIll Never Meet Again

SOLOIST Gareth Lockrane Gareth Lockrane started playing at the age of 10 and after raiding his Dad’s record collection, discovered jazz at 14. In 1994 he enrolled on the jazz course at the Royal Academy of Music in London where his teachers included Stan Sulzmann, Martin Speake, John Thomas and Eddie Parker. In 1998, he studied on the Lake Placid Jazz Course in New York with Joe Lovano, Dick Oatts and Jim McNeely, and in 2000 was a finalist in the Young Jazz Musician of the Year competition. In 2002, he formed the band Grooveyard with saxophonist Alex Garnett, which released a critically acclaimed CD Put The Cat Out. It went on to win the Best European Jazz Group award in the 2003 Granada Jazz Festival. Their 2012 album The Strut is the sequel to Put The Cat Out and was released on the independent jazz label Whirlwind Recordings. It was named “Jazz Album of the Year” in MOJO magazine. In 2006, in search of some fresh musical challenges, Gareth enrolled on the prestigious MA course in film composition at the National Film and Television School, graduating in 2008. He also f ounded his own septet, which in 2009 released the album No Messin’ and went on to win best album in the Parliamentary Jazz Awards that year.

More recently Gareth formed his own big band, the coming to fruition of all his musical interests, combining his cinematic, jazz and classical influences. The band plays all Gareth’s tunes, and in 2017 released their acclaimed debut album Fistfight at the Barndance on Whirlwind Recordings, also winning Best Big Band in the 2018 British Jazz Awards. For a number of years, Gareth has also been regularly appearing in the annual Downbeat US Critics Poll. Most recently, he was a featured soloist on the funky soundtrack to the Michael Caine heist movie, King of Thieves. Gareth is also heavily involved in the educational world, as course director of the prestigious Junior Jazz course at the Royal Academy of Music in London, as well as regularly teaching at degree and post-grad level at the Royal Academy of Music, Guildhall School of Music and Drama and Trinity College of Music.

SOLOIST T H E Q U A R T E T Gareth Lockrane & Kate Williams have been performing and recording together for over 10 years in various ensembles of Kate's including quartet, quintet and septet line-ups. For Kate, this is the second collaboration with conductor William Goodchild and orchestra having launched Interplay Series: Bill Evans and The Impressionists for jazz trio and orchestra at the 2014 Bristol Jazz and Blues Festival. A stalwart of the Bristol jazz scene, acclaimed double bassist Will Harris has performed with Andy Sheppard, Nikki Iles and David Newton, as well as legendary New York saxophonist Chris Potter with whom he toured as part of the Inner City Ensemble. Drummer Dave Smith is best known for his work with Robert Plant and the Sensation Space Shifters, Fofoulah & Afro-Blues group Juju. As co-founder of The Loop Collective, Dave is part of some of the most adventurous, and accessible, musical projects in the UK including Strobes,Cloudmakers Trio, Outhouse, MA and Splice. The programme will feature pieces arranged by Gareth and Kate especially for tonight’s concert. Gareth has chosen three original compositions from his acclaimed big band album Fistfight At The Barndance. Gareth explains, ‘Do It is inspired by a lifetime of watching 70s cop

movies, written to the exact tempo that Dirty Harry strides through the streets of San Francisco! We’ll Never Meet Again is a ballad that has always been of a tune of mine that I like to revisit in the big band that I’m looking forward to giving the orchestral treatment. One For Junia is greatly inspired by the South African pianist Bheki Mseleku, one of my biggest influences and collaborators before he died in 2008. Kate has arranged one tune from the American Songbook, the lush and beautiful Spring Is Here by Rodgers and Hart, a Bill-Evans-inspired original, Soon Enough, and a hard-swinging original Strange But True (from her album Atlas & Vulcana) which will feature Lockrane with all his brilliance and invention.

“...Lockrane's flute work is exceptional, combining a relaxed fluidity on the one hand with an acute adventurousness on the other...”

One of the most inventive and uncategorisable bands on the UK jazz scene, Bristol-based Dakhla Brass weave glittering brass threads into intricate musical tapestries across a framework of restlessly brilliant percussion. Theirs has been winningly described as “not exactly” music: not exactly jazz, not exactly brass band, not exactly Middle Eastern and not exactly Mardi Gras marching band, but a mélange of all that and more, including a shot of contemporary classical. Having launched as a drums’n’brass quartet in 2010, the band is now a six piece following the arrival of Liam Treasure on trombone in 2013 and Nostalgia 77’s Riaan Vosloo on double bass in 2017. Band members feature in a roll-call of other exceptional projects including Sefrial, The Zen Hussies, Get The Blessing (last year’s featured artists in the Jazz Meets BriSO concert), Hannah Williams Band, and Modulus III. The band’s beautifully-crafted compositions (mainly written by

DAKHLA BRASS baritone saxophonist Charlotte Ostafew, and also by drummer Matt Brown) have made regular appearances across BBC Radio, with Jamie Cullum being a particular champion; he even invited the band to perform at his 2016 BBC Prom in the Royal Albert Hall. As a result of the Cullum connection, they also played at the Montreal Jazz Festival in the same year. The band’s fourth and most recent album, Murmur, was recorded at London’s Fish Factory with producer Ben Lamdin (Riaan’s bandmate in Nostalgia 77). Tonight’s concert features brand-new orchestral arrangements of tunes from Murmur, making full use of the extraordinary sound-palette of Bristol Symphony. From the poignant New Orleans funeral march of The Last Host, to the crashing anthemic riffs of 5000 What?, via the playful schizophrenia of Insomnia Somnia and the minimalist groove crescendo of One Wicker Wisp’s final section, this is music of power, craft, tenderness and wit, delivered with energy and poise by an indisputably unique musical collective.

William Goodchild is a professional composer and conductor. He composes music for film, television, concert performance and commercial installation. Many of the 80 films he’s composed for the major broadcasters have won international awards. Since 2016, he has had three nominations for Best Composer at the RTS West of England Awards and, in 2016, was nominated for the Music Award at Wildscreen Festival for Jago - A Life Underwater. In 2017 he won Best Score at the Hollywood International Moving Pictures Film Festival for Living Spirit Pictures’ Seeing Him. Rise of the Warrior Apes (Discovery) won the Golden Panda at Wildscreen Festival 2018.

Artistic Director and CONDUCTOR On stage and in the recording studio, William has collaborated with a wide variety of international soloists including guitarist John Williams, singer Tom Jones, saxophonist Andy Sheppard and jazz quartet Get The Blessing. William’s passion for working across styles led to a live & recorded collaboration with Mercury Prize-Winner, Roni Size & Reprazent, and their album, Live at Colston Hall, was released in November 2015. Also at the Colston Hall, with Sir David Attenborough presenting, William orchestrated & conducted the BBC’s Nature’s Great Events Live to a sell-out audience. The BBC’s Wild China series, orchestrated and conducted by William, won an Emmy. Many recordings conducted by William are available to buy on Sony Classical, Universal Classical and Jazz, and CBS Records. He has worked regularly with a number of professional orchestras including the BBC Concert Orchestra, Royal Philharmonic Orchestra, Bournemouth Symphony Orchestra and Bristol Ensemble.

LEADER PAMELA BELL Pamela Bell is the Principal Leader and co-founder (2016) of Bristol Symphony Orchestra. Prior to playing with the orchestra, she was the leader of Bristol Metropolitan Orchestra (2010 - 2015). As well as leading the youth orchestras she played with, she has performed with Bristol Classical Players, Bristol Opera and The London Lawyers’ Symphony Orchestra. Before re-locating to Bristol from London in 2005, she was the musical director for Newham Schools Orchestra and is the founder of Kuumba Youth Music (now Kuumba Youth Orchestra). Pamela is a commercial lawyer working in-house. She is passionate about music... “Music is my sanctuary and, having the opportunity to create and share my passion for it, is truly a privilege and a treasure.”

“One of the UK’s most distinctive pianists”

PORTRAIT KATE WILLIAMS Kate Williams - Piano: Kate Williams has gained a distinctive reputation as both a writer and performer having worked with Chris Biscoe’s Mingus Profiles Sextet, Stan Sulzmann, Julian Siegel, Pete Hurt Jazz Orchestra and the late Bobby Wellins as well as leading various ensembles of her own, the most recent being Four Plus Three, a collaboration between her trio and the Guastalla Quartet. In 2014 with conductor/composer William Goodchild, she co-founded Interplay Series: Bill Evans and the Impressionists, a project featuring jazz trio and full orchestra performing new arrangements of tunes by Bill Evans alongside classical works by Ravel and Debussy. Her latest album is Finding Home, a collaboration between her Four Plus Three and vocalist Georgia Mancio. 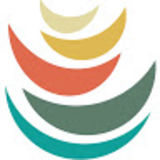