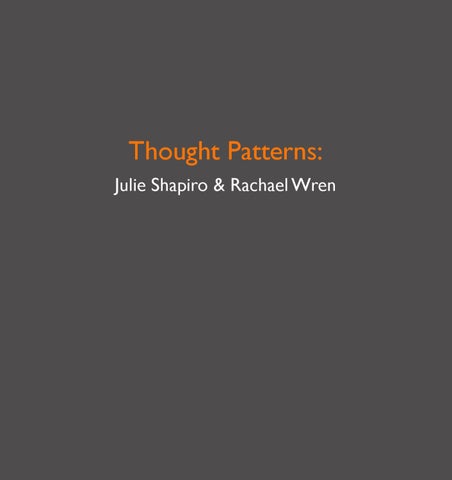 Process and Perception: Julie Shapiro and Rachael Wren Pairing the work of two artists can be a tricky proposition. It cannot simply be reduced to the elements of a Venn diagram: union, intersection, and exclusion. Inherent to the pair’s success is the necessity of striking an equitable balance of common ground and contrasting attributes. A pairing must also provide illumination and insight into the work of both while establishing an engaged dialogue between the artists. Julie Shapiro and Rachael Wren are painters who share a similar abstract lineal descent and who continuously mine the rich potential of abstract languages, albeit in very different ways. The perceptual aspects of painting play a critical role for both: Shapiro brings an intuitive approach and a continual search for form, structure, and gesture, while structure is inherent in Wren’s systemic painting. Within the conceptual realm of their art-making practice, their work is linked by a belief that it is the interrelationships of space, composition, color, form, and a searching for structure, rather than these things themselves, that are important. 1 A landscape element is present in both artists’ work, but manifested in distinct ways. Each explores “qualities of the natural world through the language of geometric abstraction” as direct experience within the natural world provides a point of departure. 2 The genesis of their painting is rooted in an experiential process of engagement with physical space. Wren’s earliest paintings were direct observations from the landscape. These became increasingly dematerialized over time until the subject was no longer the individual elements of the landscape but the spaces in-between them. Shapiro’s approach is much less literal and landscape is merely suggested in her work. Since the 1990s she has broken away from the favored modernist trope of the grid to incorporate emphatically chromatic and layered oblique lines. These striking compositional elements create a series of robust warp and weft threads, often in saturated hues in works such as Stratum 1 and Billow. The alteration of form, growth, and the evocative and changing nature of light over time are embedded in these paintings. An interest in movement and directionality is another affinity these two artists share, but again, these are articulated in very different ways. Shapiro’s work contains strong vertical and horizontal movements

through her stratified gestural marks. There is an ebb and flow in her paintings suggesting motion and the passage of time. They are linked to a deeply engaged sensory and aesthetic experience to the natural world, not only suggesting landscape, but also more importantly evoking it. Shapiro’s work has a temporal longevity for the viewer similar to the long stationary sequences favored by Russian director Andrei Tarkovsky. In his films Tarkovsky incorporated lengthy shots of flowing water in a stream or the swirling patterns of clouds in Solaris, and again with extended views of the flat expanse of the Scandinavian landscape in The Sacrifice. Like Tarkovsky, Shapiro imbues her works such as Stratum 2 with an elongation of the passage of time by an incalculable magnitude, and her paintings share an aesthetic kinship with those beautiful long shots by Tarkovsky in nature. Indeed, it has been noted that “Shapiro’s work seems…in the realm of pure sensation: the look and feel of color, paint, light, and texture.” 3 Wren’s paintings undulate under billowing forms that appear to breathe in and out, expanding and contracting. Her paintings inherently engage in what perceptual psychologist Rudolf Arnheim described as a foundation for visual perception — our relational observations, or observations between the specific elements of the composition in relation to the whole that are read as such.4 Thus, even the slightest gradation of color appears to give form, shape, or movement. Her works are elaborate matrices filled with infinite chromatic nuance. They cannot be fully perceived in a tachistoscopic fashion but must be pondered at length to appreciate their complexity. Wren’s compositions are arranged within the vectors of the Cartesian coordinates, distributed across the x, y, and z of three dimensional axes and vary from the repeated surging forms of Echo to the central orb-like dissipating Midnight Pond. That is not to suggest that these paintings are merely exercises in the patterning of information or to essentialize them into perceptual inquiries of superfluous retinal stimulation. They are indeed rooted in real experience — their mathematical inclination is entirely intuitive and they are drawn from the artist’s interactions with the physical space that surrounds her. In the 1950s, John H. I. Baur, the seminal curator at the Whitney Museum of American Art, identified a tendency of reacting to, adopting elements of, and incorporating nature into abstract painting in the ground-breaking exhibition Nature in Abstraction: The Relation of Abstract Painting and Sculpture to Nature in Twentieth-Century American Art. Baur recognized that artists drew on natural imagery, either

in a conscious or unconscious ways to create what he called “a kind of organic and ‘natural’ teleology of form.”5 This was something that was passed down to succeeding generations of abstract painters, many of whom have been inspirational to both Shapiro and Wren, whose predecessors include Richard Anuszkiewicz, Andrew Forge, Brice Marden, Robert Ryman, and Sanford Wurmfeld, just to name a few. It is from this lineage that Shapiro and Wren are descended and they continue to explore this language as demonstrated by the juxtapositioning of their work in this exhibition. Both artists search for an extrasensory experience, yet each takes a divergent path to get there. Whether found in Shapiro’s evocative visceral canvases or Wren’s controlled perceptual matrices, together their works engage in a dialogue that can be found at the intersection of process and perception.

Marshall N. Price is the Curator of Modern and Contemporary Art at the National Academy Museum.

Julie Shapiro (www.julieshapiroart.com) received her BA in art from the University of California Santa Cruz in 1972 and her MFA in painting/printmaking from the Yale School of Art in 1980. In the summer of 1976 she attended the Yale Summer School of Art, Norfolk, Connecticut. Shapiro has had numerous exhibitions around the country, including shows at Elizabeth Harris Gallery, NYC, Lenore Gray Gallery, Providence, RI, the Drawing Center, NYC, Geoffrey Young Gallery, MA and Milwaukee Institute of Art, among others. Her work was featured in two person exhibitions, Time and Abstraction at SMU, Dallas, TX and Lenore Gray Gallery, Providence, RI. She is currently represented by Francine Seders Gallery, Seattle and Wendt Gallery, NY and Laguna Beach, where she has had solo exhibitions. Shapiro has taught at Southern Methodist University, Dallas and at Hampshire College, Amherst, MA, and has been a Visiting Artist at numerous colleges. She has received several awards, including a Pollock Krasner Foundation grant in 1989. Her work is included in numerous collections throughout the country.

Rachael Wren (www.rachaelw.com) received a BA from the University of Pennsylvania in 1998 and an MFA from the University of Washington in 2002. She has exhibited her work in numerous group shows throughout the US, and has had solo exhibitions at the University of Massachusetts and Providence College. Wren was awarded the Julius Hallgarten Prize in 2006 from the National Academy Museum and an Aljira Fellowship in 2007. She has attended residencies at the Saltonstall Foundation, the Byrdcliffe Art Colony, Vermont Studio Center, and the Anderson Center for Interdisciplinary Studies. Wren has been a Visiting Artist-in-Residence at the University of North Carolina and at St. Maryâ&#x20AC;&#x2122;s College of Maryland, and has given lectures about her work at the Weatherspoon Art Museum, the Hartford Art School, Pratt Institute, Kutztown University, and Rhode Island College. Her work was included in the February/March 2010 edition of New American Paintings.

From the exhibition "Thought Patterns: Julie Shapiro & Rachael Wren" at The Painting Center, January 4-29, 2011. Includes an essay by Marsh...

From the exhibition "Thought Patterns: Julie Shapiro & Rachael Wren" at The Painting Center, January 4-29, 2011. Includes an essay by Marsh...