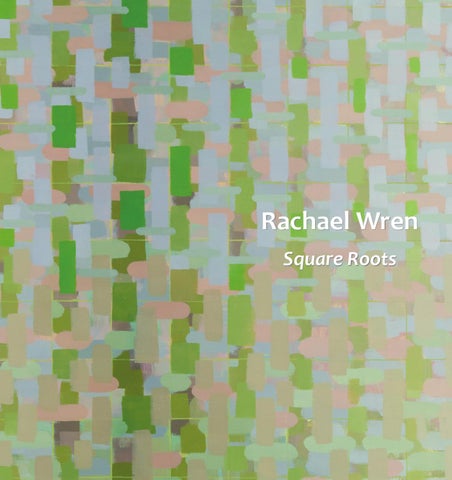 Rachael Wren and the Nature of Glimpsing Henry David Thoreau wrote in his Journal: “Sometimes I would rather get a transient glimpse or side view of a thing than stand fronting to it …. The object I caught a glimpse of as I went by haunts my thoughts a long time, is infinitely suggestive.”1 The things we glimpse are always suffused with uncertainty. Thoreau cast this uncertainty as productive, believing that his excursions in the Walden woods opened him to encounters with a natural world that was different and various each time he encountered it. Like Thoreau, Rachael Wren is interested in a natural world whose most powerful feature is suggestiveness. Her abstract landscapes offer glimpses of the finite (the leaf, the blade of grass, the ripple) within the infinite (the woods, the meadow, the marsh). At the knife-edge of liminal space — the threshold of the forest, the hybrid terrain of wetlands, a world made eerie by the glare of the moon — familiar natural forms take on uncanny, vaporous manifestations. The titles of Wren’s paintings tell us what to look for but not how to see it. Take, for example, Marsh. The painting suggests blue water punctured by green reeds, or green water reflecting a blue sky. The eponymous marsh holds the sun’s reflection, or is lit by some luminescence from within. The eye glimpses one possibility and then the other, and then the other, cycling through them ad infinitum. Wren’s vibrating, glowy color combinations catalyze this fluidity of vision, as do her soft, ovoid brushstrokes, which seem to dissolve the grid upon which they are arranged. No matter what we see in Wren’s paintings, we want to get closer to them, even step inside them. Paintings such as Grove, Clearing, Two Paths, and City Sky Cadence suggest sliding panels, or partings in a billowing curtain that we might step through, if we could only time our stepping just right. More often than not, these apertures slide and shift, effacing any sure point of entry. The paintings evoke doorways in the way that a pair of trees, a fissure in a rock face, a clearing in the brambles, or a parting in the clouds evokes a doorway. We are possessed by the instinct to go in, and beyond, into what Thoreau called “the background into which leads the path of the pilgrim.”2

The evolution of Wren’s work chronicles her own particular pilgrimage. Over the past ten years, she has moved further and further from representation in order to push the limits of what we recognize as “natural” form. The grid and repeated regular brushstrokes have organized and even contained landscapes predominately composed of what resists control: light, reflection, and vapor. In her newest work, such as Dynamic Equilibrium, Inlet, Midwinter, and Overgrowth, we glimpse the entropic. Wren’s brushstrokes are quicksilver as aspen leaves: they shimmy and pulse. Forms advance, recede, and advance again, straining toward us through the canvas. As the title of the show, Square Roots, implies, the artist is still looking at the natural world through the lens of geometry. Perhaps there is a dash of chaos theory in here too. The new paintings honor and accelerate the capricious motion of organic matter. We might glimpse a rain shower touching ground, a swarm of insects darkening the sky, a wave breaking over the breakwater, or lilac bushes spontaneously exploding into blossom. Or we might glimpse something else entirely. Of one thing we can be certain: the phenomena of Wren’s paintings suggest as many stories, spaces, secrets, or states of mind as there are viewers to glimpse and be haunted by them. Cecily Parks March 2013 Cambridge, Massachusetts Cecily Parks is the author of the poetry chapbook Cold Work (Poetry Society of America, 2005) and the collection Field Folly Snow (University of Georgia Press, 2008). She is at work on a second collection, O’nights, as well as a scholarly project on swamps and experimental writing by American women.

Catalog for "Square Roots," a solo exhibition of recent paintings by Rachael Wren. On view at The Painting Center, 547 W 27th Street, NYC,...

Catalog for "Square Roots," a solo exhibition of recent paintings by Rachael Wren. On view at The Painting Center, 547 W 27th Street, NYC,...