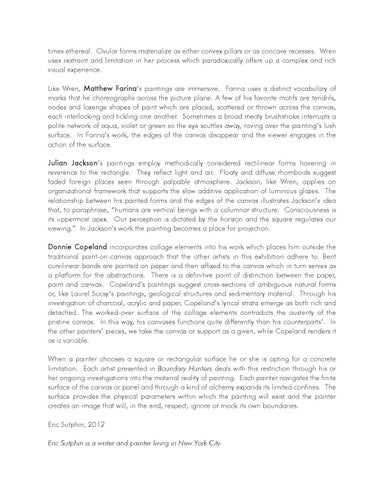 times ethereal. Ovular forms materialize as either convex pillars or as concave recesses. Wren uses restraint and limitation in her process which paradoxically offers up a complex and rich visual experience. Like Wren, Matthew Farina’s paintings are immersive. Farina uses a distinct vocabulary of marks that he choreographs across the picture plane. A few of his favorite motifs are tendrils, nodes and lozenge shapes of paint which are placed, scattered or thrown across the canvas, each interlocking and tickling one another. Sometimes a broad meaty brushstroke interrupts a polite network of aqua, violet or green so the eye scuttles away, roving over the painting’s lush surface. In Farina’s work, the edges of the canvas disappear and the viewer engages in the action of the surface. Julian Jackson’s paintings employ methodically considered rectilinear forms hovering in reverence to the rectangle. They reflect light and air. Floaty and diffuse rhomboids suggest faded foreign places seen through palpable atmosphere. Jackson, like Wren, applies an organizational framework that supports the slow additive application of luminous glazes. The relationship between his painted forms and the edges of the canvas illustrates Jackson’s idea that, to paraphrase, “humans are vertical beings with a columnar structure. Consciousness is its uppermost apex. Our perception is dictated by the horizon and the square regulates our viewing.” In Jackson’s work the painting becomes a place for projection. Donnie Copeland incorporates collage elements into his work which places him outside the traditional paint-on-canvas approach that the other artists in this exhibition adhere to. Bent curvilinear bands are painted on paper and then affixed to the canvas which in turn serves as a platform for the abstractions. There is a definitive point of distinction between the paper, paint and canvas. Copeland’s paintings suggest cross-sections of ambiguous natural forms or, like Laurel Sucsy’s paintings, geological structures and sedimentary material. Through his investigation of charcoal, acrylic and paper, Copeland’s lyrical strata emerge as both rich and detached. The worked-over surface of the collage elements contradicts the austerity of the pristine canvas. In this way, his canvases functions quite differently than his counterparts’. In the other painters’ pieces, we take the canvas or support as a given, while Copeland renders it as a variable. When a painter chooses a square or rectangular surface he or she is opting for a concrete limitation. Each artist presented in Boundary Hunters deals with this restriction through his or her ongoing investigations into the material reality of painting. Each painter navigates the finite surface of the canvas or panel and through a kind of alchemy expands its limited confines. The surface provides the physical parameters within which the painting will exist and the painter creates an image that will, in the end, respect, ignore or mock its own boundaries. Eric Sutphin, 2012 Eric Sutphin is a writer and painter living in New York City.