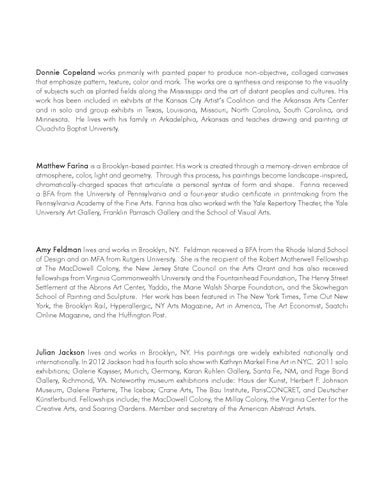 Donnie Copeland works primarily with painted paper to produce non-objective, collaged canvases that emphasize pattern, texture, color and mark. The works are a synthesis and response to the visuality of subjects such as planted fields along the Mississippi and the art of distant peoples and cultures. His work has been included in exhibits at the Kansas City Artistâ&#x20AC;&#x2122;s Coalition and the Arkansas Arts Center and in solo and group exhibits in Texas, Louisiana, Missouri, North Carolina, South Carolina, and Minnesota. He lives with his family in Arkadelphia, Arkansas and teaches drawing and painting at Ouachita Baptist University.

Matthew Farina is a Brooklyn-based painter. His work is created through a memory-driven embrace of atmosphere, color, light and geometry. Through this process, his paintings become landscape-inspired, chromatically-charged spaces that articulate a personal syntax of form and shape. Farina received a BFA from the University of Pennsylvania and a four-year studio certificate in printmaking from the Pennsylvania Academy of the Fine Arts. Farina has also worked with the Yale Repertory Theater, the Yale University Art Gallery, Franklin Parrasch Gallery and the School of Visual Arts.

Amy Feldman lives and works in Brooklyn, NY. Feldman received a BFA from the Rhode Island School of Design and an MFA from Rutgers University. She is the recipient of the Robert Motherwell Fellowship at The MacDowell Colony, the New Jersey State Council on the Arts Grant and has also received fellowships from Virginia Commonwealth University and the Fountainhead Foundation, The Henry Street Settlement at the Abrons Art Center, Yaddo, the Marie Walsh Sharpe Foundation, and the Skowhegan School of Painting and Sculpture. Her work has been featured in The New York Times, Time Out New York, the Brooklyn Rail, Hyperallergic, NY Arts Magazine, Art in America, The Art Economist, Saatchi Online Magazine, and the Huffington Post.