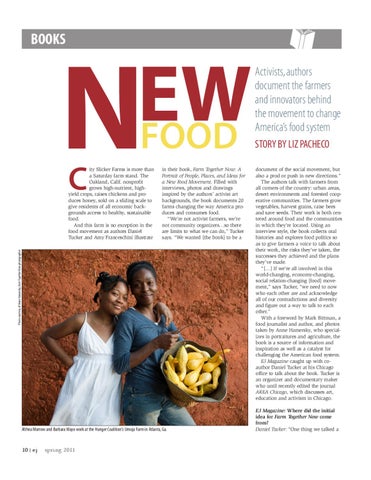 in their book, Farm Together Now: A Portrait of People, Places, and Ideas for a New Food Movement. Filled with interviews, photos and drawings inspired by the authors’ activist art backgrounds, the book documents 20 farms changing the way America produces and consumes food. “We’re not activist farmers, we’re not community organizers…so there are limits to what we can do,” Tucker says. “We wanted [the book] to be a

ity Slicker Farms is more than a Saturday farm stand. The Oakland, Calif. nonprofit grows high-nutrient, highyield crops, raises chickens and produces honey, sold on a sliding scale to give residents of all economic backgrounds access to healthy, sustainable food. And this farm is no exception in the food movement as authors Daniel Tucker and Amy Franceschini illustrate

Activists, authors document the farmers and innovators behind the movement to change America’s food system STORY BY LIZ PACHECO document of the social movement, but also a prod or push in new directions.” The authors talk with farmers from all corners of the country: urban areas, desert environments and forested cooperative communities. The farmers grow vegetables, harvest grains, raise bees and save seeds. Their work is both centered around food and the communities in which they’re located. Using an interview style, the book collects oral histories and explores food politics so as to give farmers a voice to talk about their work, the risks they’ve taken, the successes they achieved and the plans they’ve made. “[…] If we’re all involved in this world-changing, economy-changing, social relation-changing [food] movement,” says Tucker, “we need to now who each other are and acknowledge all of our contradictions and diversity and figure out a way to talk to each other.” With a foreword by Mark Bittman, a food journalist and author, and photos taken by Anne Hamersky, who specializes in portraitures and agriculture, the book is a source of information and inspiration as well as a catalyst for challenging the American food system. EJ Magazine caught up with coauthor Daniel Tucker at his Chicago office to talk about the book. Tucker is an organizer and documentary maker who until recently edited the journal AREA Chicago, which discusses art, education and activism in Chicago. EJ Magazine: Where did the initial idea for Farm Together Now come from? Daniel Tucker: “One thing we talked a

EJ Magazine is one of the only student-produced magazines about environmental issues in the country. It's published by the Knight Center for Environmental Journalism at Michigan State University.